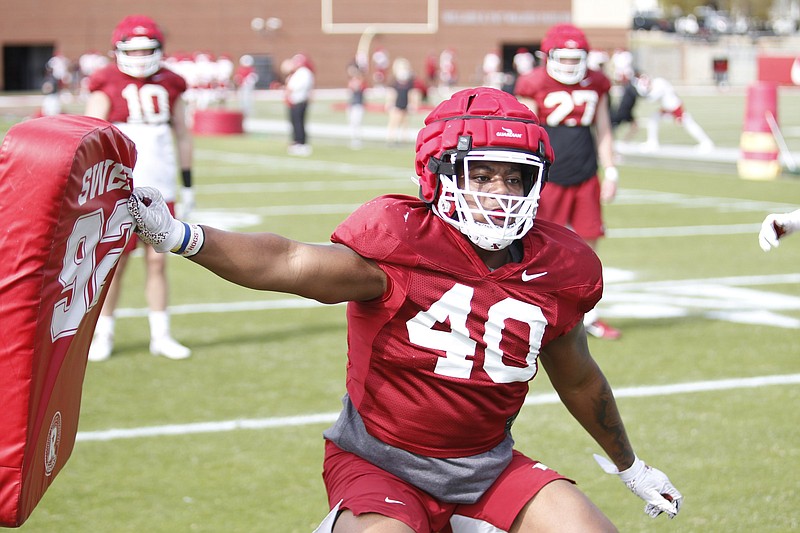 Arkansas freshman linebacker Chris Paul Jr. shined at Crisp County (Ga.) High School and was the captain on a defense that included three other Division I signees. “With all that talent, there’s still got to be a guy that everybody looks to as the leader,” Crisp County Coach Brad Harber said. “That was Chris.” (University of Arkansas Athletics/Sam Smith)

“With all that talent, there’s still got to be a guy that everybody looks to as the leader,” said Brad Harber, Crisp County’s coach the previous four years. “That was Chris.

“Those players have to love you to be willing to follow you, and Chris was that guy for us.” Paul, who is from Cordele, Ga., said he felt fortunate to be captain of a defense that produced so many Division I signees.

“That really was a blessing,” he said. “It shows what I can do if I put my mind to it.” Paul said he learned leadership skills from his parents. His father, Chris Paul Sr., served in the Navy and now works as a civilian in logistics supply at Robins Air Force Base and also is a coach at Crisp County Middle School. His mother, Velieka, is a registered nurse.

“My son has a lot of good leadership qualities, and that probably comes from listening to the guys that came before him,” Paul Sr. said. “To be a good leader, first you had to be a good follower when you were young.” Players at Crisp County Paul could look up when he was younger included defensive end Big Kat Bryant, a senior who played at Auburn and now is at Central Florida; Georgia senior linebacker Quay Walker; and North Carolina junior defensive tackle Jahlil Taylor.

As a freshman at Arkansas, Paul said he has plenty of good leaders among the linebackers, including seniors Grant Morgan and Bumper Pool.

“The guys in the linebacker room welcomed me with open arms,” said Paul, an early enrollee in January. “All those guys made it their priority to teach me the play-book, teach me the way we do things during the workouts, in practice. They took me in just not as another linebacker, but as a human being.

“There’s never a time I can’t call Grant or call Bumper and ask for help when I have a question on a play or a scheme.” Morgan said he believes Paul has a bright future with the Razorbacks.

“He’s shown a lot of glimpses of being really good,” Morgan said. “He has the body, he has the speed. He’s got to continue to mature, but he’s still young.

“He’s got a really high ceiling.” Among the glimpses Paul showed last spring was when he had eight tackles in the Red-White intrasquad game before an announced crowd of 18,874.

“The Red-White game was amazing,” Paul said. “It was one of the best experiences I’ve ever had.

“It gave me major confidence, because the fans came out and showed a lot of support. In high school, you don’t get to play in front of all those people.” Paul had 91 tackles in 11 games as a senior at Crisp County and 157 in 15 games as a junior, including a combined 30 for lost yards.

“It’s real-deal, tough-man football down here in south Georgia, and Chris is physical and likes to play that way,” Harber said. “He’s fun to watch, that’s for sure, because he can run to the ball and knock the crap out of somebody when he gets there. He’s the ultimate competitor.” Paul, 6-1, said he played at 245 pounds last season. He got up to about 250 pounds before arriving at Arkansas and credits strength and conditioning coach Jamil Walker for helping him get down to

“I’ll never forget, Coach Walker sat me down and said, ‘We’re going to cut you up into the beast you’re supposed to be,’ ” Paul said. “After just a couple months, I got down to 235, and I feel great.

“I’m in way better shape than I was when I got here, and I’ve become more physical. Coach Walker is turning me into a beast.

“At 235, I’m much faster, much quicker. My mobility in my hips is way better than it’s ever been. My motor and sideline to sideline speed is very high.” Arkansas Coach Sam Pittman said Paul still has work to do conditioning-wise.

“I think he’s very, very talented. He’s going to make tackles. He can run.” During the spring Paul worked at middle and weakside linebacker.

“I can play either. So if anybody goes down, the coaches have confidence in me knowing that I know both positions.” The past four years Paul Sr. drove his son to visit more than 20 college campuses and take part in summer camps before travel was restricted because of the coronavirus pandemic. He also took several of his son’s teammates on trips.

“My dad looked out for the whole team, not only me,” Paul said. “Yes, he looked out for me, because I’m his son, but he also treated everybody else on the team like they were his sons as well.

“My dad wanted to see us all be successful. There are times I can remember my dad didn’t take me on a visit, but he took some other guys to Georgia Tech, Georgia, Florida State and Florida. He went the extra mile for those guys just like he went the extra mile for me.” Paul committed to Nebraska in May of 2020, but reconsidered when he started getting more scholarship offers. He committed to Arkansas in July of 2020. Other offers included Tennessee, Michigan State, TCU, West Virginia, Cincinnati and Louisville.

Razorbacks offensive coordinator Kendal Briles had the same position at Florida State when Paul visited there. He and his family knew Arkansas running backs coach Jimmy Smith from his time as the coach at Cedar Grove (Ga.) High School.

“Having all those coaches at one school, after they had recruited me for other schools, just told me Arkansas was the place I should be,” Paul said. “It’s like I was meant to be here.”

Paul at a glance

The 13th in a series featuring newcomers to the University of Arkansas football team. 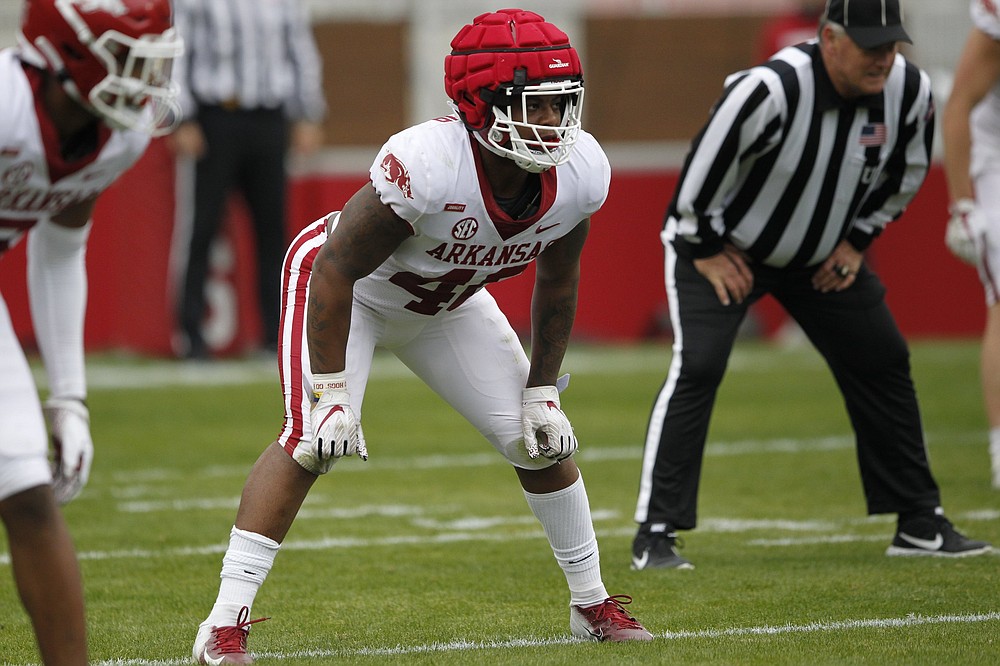 Freshman Chris Paul Jr. said Arkansas’ veteran linebackers have been quick to help him adjust. “All those guys made it their priority to teach me the playbook, teach me the way we do things during the workouts, in practice,” he said. (University of Arkansas Athletics/Sam Smith) 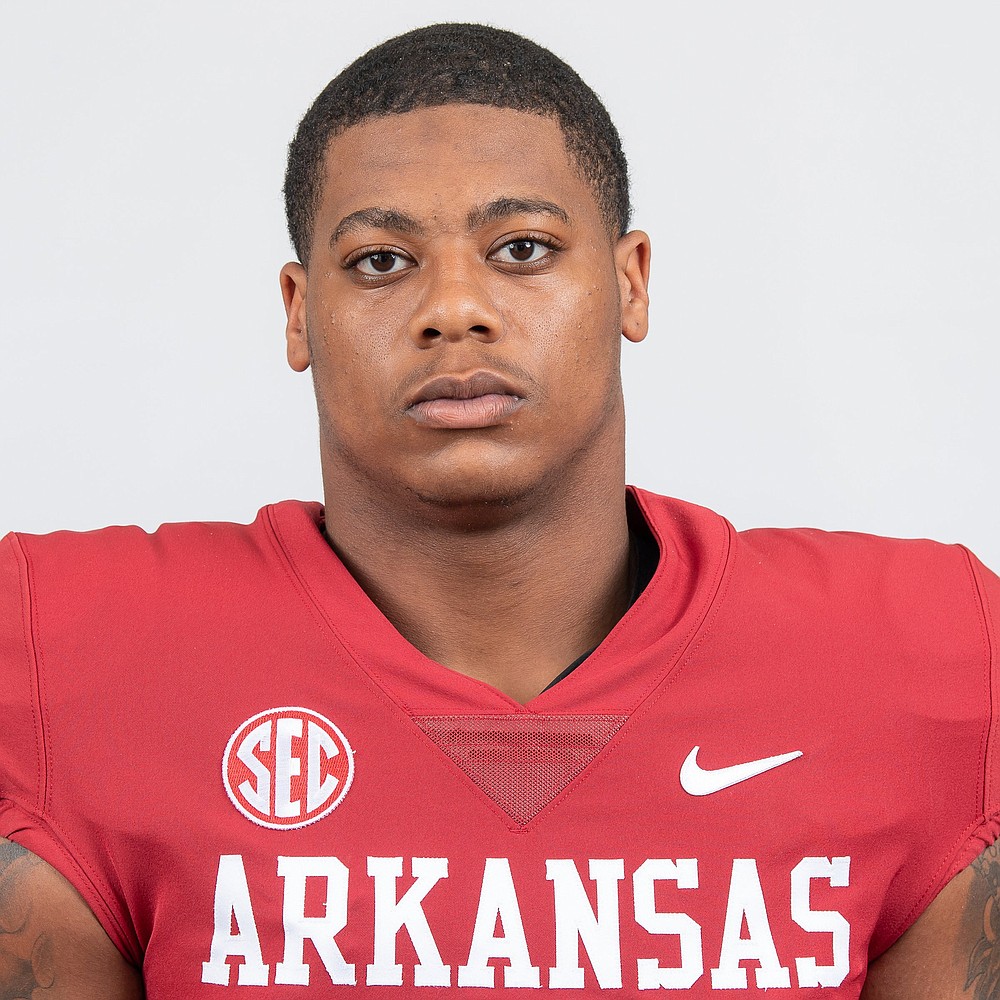