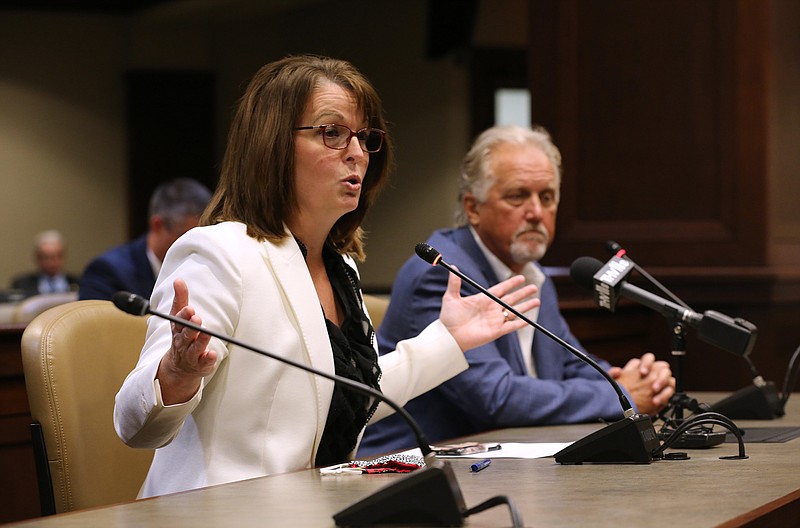 A bill to allow public school boards in Arkansas to enact mask mandates under certain circumstances failed to advance from committee on Wednesday after the sponsor pulled it down to rework it at the end of about three hours of questions and debate.

The General Assembly began meeting Wednesday in a special session initiated by Republican Gov. Asa Hutchinson, who called on lawmakers to allow public schools to implement masking protocols in facilities where children under 12 are present for academic purposes amid the covid-19 pandemic. School boards cannot do this under Act 1002 of 2021, which bars most state or local government entities, including public schools, from requiring face coverings.

The state faces one and possibly two lawsuits over Act 1002. Two parents filed suit over the law earlier this week and Wednesday night, the Little Rock School Board authorized district officials to file suit over the anti-masking law.

House Bill 1003 by Rep. Julie Mayberry, R-Hensley, would apply to school buildings, buses and other congregate educational settings where children under 12 may be present during times dedicated for academic purposes if the district has a 14-day coronavirus infection rate of at least 50 new known infections per 10,000 district residents, based on data from the state Department of Health or the Arkansas Center for Health Improvement.

Vaccinations against the virus are not open to children under 12 under U.S. Centers for Disease Control and Prevention guidelines.

The local school board would have to vote to approve the mandate. For charter schools, the requirement could be imposed if the school meets that infection rate.

Any mandate could not last longer than 60 days, and after that the school board or charter school could implement a new requirement if the infection rate threshold is met.

The bill includes exemptions for individuals who are able to maintain an adequate physical distance from others or have a disability or medical issue that prevents them from wearing a mask.

Presenting her bill to the House Committee on Public Health, Welfare and Labor, Mayberry said children's mental health and test scores are decreased when they are isolated, and that the delta variant of the virus is making children sicker.

She was joined by Glen Fenter, superintendent of the Marion School District in east Arkansas, and Dr. Heather Young, a pediatric infectious disease doctor.

The Marion district as of Wednesday had more than 700 students quarantined after school was open for less than two weeks, and Fenter is saying his district is the "canary" warning of the danger to come regarding the effect of Act 1002 on education this year.

The district has a unique school and began classes July 26. The district serves about 4,000 students.

"I can't teach our kids if they are quarantined," he told the committee. "We simply need the ability to protect our students the best way can. If not, we are going to have another school year where our students don't learn and another interruption in our economy. Not just in Marion, but all across Arkansas."

Young said masks are an inconvenience, but they don't harm children.

"We have not seen any children being hospitalized as a consequence of wearing a mask but right now with this delta variant we are seeing the rates of covid-positive children in our hospitals rising astronomically," she said.

Committee members questioned Fenter about measures the district had taken in response to the pandemic, and he was asked multiple times if he believed it was fair to force students to wear masks during class while extracurricular activities didn't require them.

"One of the things that drove people crazy about the mask mandates previously were the inconsistencies in them," Rep. Justin Gonzales, R-Okolona, said. "Students had to wear them in a classroom, football players could get on the field and tackle each other and slobber all over each other."

Gonzales asked if Fenter would support an amendment that would shut down extracurricular activities if the infection rate threshold was reached.

"Extracurricular activities are important to the lives of our students, especially to those who live in poverty; it's a lifeline. A lot of things last year seemed goofy but we believed they worked and helped, but at this point I would discuss anything to have the option to put local masks on our students and stop this new surge that I believe is more dangerous," Fenter said.

Rep. Mary Bentley, R-Perryville, asked Young whether children should have been allowed to develop "natural immunity" to the virus by not being masked last year.

Young said vaccine immunity is superior to that from becoming infected.

People who spoke against the bill said the decision of whether to wear a mask should be left up to individuals and made disputed claims about masks, including citation of a retracted study.

"You want to be saved by Jesus, you have to make that decision," Wayne Beech said. "You're responsible for your own personal choices and your children's choices, your family's choices, and nobody else can do that for you and nobody else should have that responsibility. ... Viruses will come and go, liberties are forever gone if you lose them."

The bill had support from the Arkansas Association of Educational Administrators and the Arkansas Center for Health Improvement.

Mike Hernandez, executive director of the Arkansas Association of Educational Administrators, spoke for the bill. He said there was an "overwhelming response that there was support for this type of bill" from the organization, though he said there were some members who didn't feel like it was an appropriate path and would rather see a mandate coming from a higher level.

Rep. Jon Eubanks, R-Paris, said he was conflicted on the bill. While he said he did not like some aspects of the bill, he referenced his experience serving on the board of a child advocacy organization and seeing parental abuse and neglect.

Eubanks said he didn't "want to be responsible for a child being hospitalized and potentially dying."

Rep. Aaron Pilkington, R-Knoxville, said he would vote no on the bill because there would still be outbreaks, and it does not address compliance.

"My fear is whether we mask or we don't mask, I still think sending kids to school right now when we're in the most rampant uptick of the delta variant is a bad idea," he said.

Rep. Deborah Ferguson, D-West Memphis, said she would like to see the 60-day limit reduced to 30 and the infection rate threshold reduced to allow a quicker response. She suggested Mayberry pull down the bill to receive feedback, which she did.

Mayberry said afterward she would look at the items Ferguson suggested as well as language that would address child care facilities affiliated with the University of Arkansas System. She did not immediately have a time frame for redrafting the bill.

Earlier in the day Wednesday, she acknowledged the bill was unlikely to pass.

"If it gets out of committee, it'll be a miracle. I recognize this could be political suicide," she said.

Asked about the legislation, House Speaker Matthew Shepherd, R-El Dorado, said he doesn't know whether the number of representatives who are willing to consider some changes to Act 1002 has changed.

"Right now, I think it is too early to say whether the debate and what occurred in [committee] has changed anything," he told reporters Wednesday evening.

On Tuesday, he said he doubted there was sufficient support in the House to approve Hutchinson's proposal.

Sen. Trent Garner, R-El Dorado, who sponsored the legislation that became Act 1002, tweeted that people must fight against Mayberry's bill, calling it dangerous.

Garner said in an interview that the bill takes freedom away from people.

He said he doesn't know about the bill's prospects in the House, but said it would face a "very uphill battle in the Senate [public health] committee and in the Senate as a whole is very unpopular."

Senate President Pro Tempore Jimmy Hickey, R-Texarkana, said he did not have an opinion about Mayberry's bill and has not polled senators about it.

The bills are a response to a Pulaski County circuit judge's ruling last week that ordered the state to try to resume its participation in federal unemployment assistance programs that Hutchinson had sought to end.

Circuit Judge Herbert T. Wright's temporary injunction against Hutchinson's order affects some 69,000 unemployed Arkansans who had been receiving weekly $300 federal supplements to their regular unemployment compensation benefits from the state.

Hutchinson announced in May that he would end Arkansas' participation in the federal programs after June 26, saying the federal supplements were interfering with employers' ability to find enough workers.

The House and Senate are scheduled to reconvene at 10 a.m. today.

At 9 a.m., the Senate Education Committee is scheduled to consider Senate Bill 2 by Sen. Alan Clark, R-Lonsdale, which allows local school boards to establish policies concerning quarantine requirements and mask mandates but permits parents or guardians to transfer out of their assigned public school district based on that policy.

"The filing of bills like HB1003 and SB2 shows that members of the General Assembly are serious about protecting those who are are not eligible to get vaccinated. I appreciate their work to provide school districts with the flexibility they need," Hutchinson said in a statement Wednesday evening. 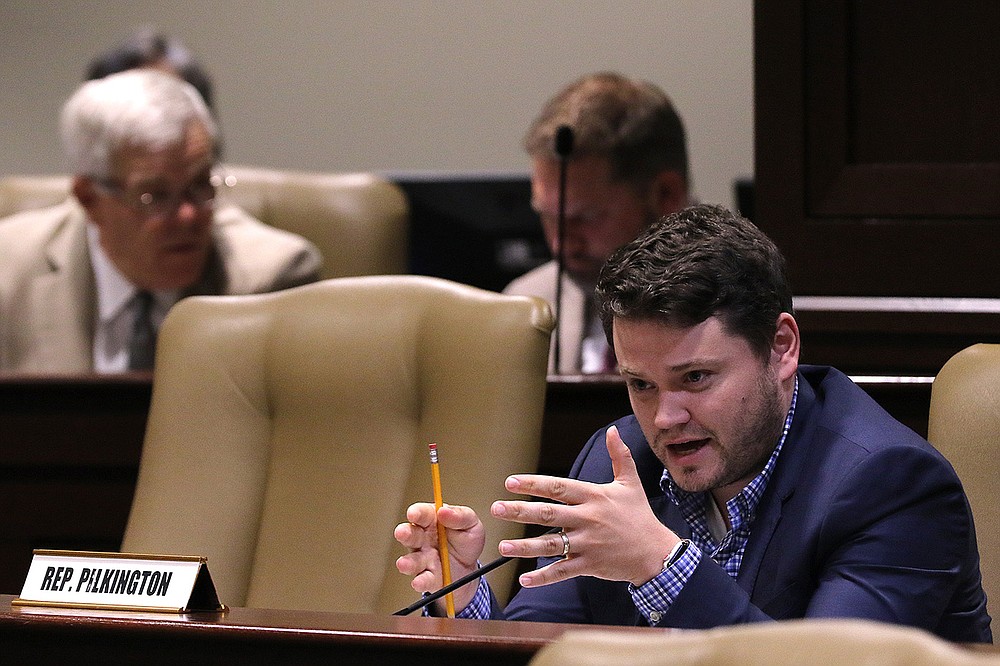 “My fear is whether we mask or we don’t mask, I still think sending kids to school right now when we’re in the most rampant uptick of the delta variant is a bad idea,” Rep. Aaron Pilkington said Wednesday during the committee meeting. He said he opposed the bill because there would still be outbreaks, and it does not address compliance. (Arkansas Democrat-Gazette/Thomas Metthe) 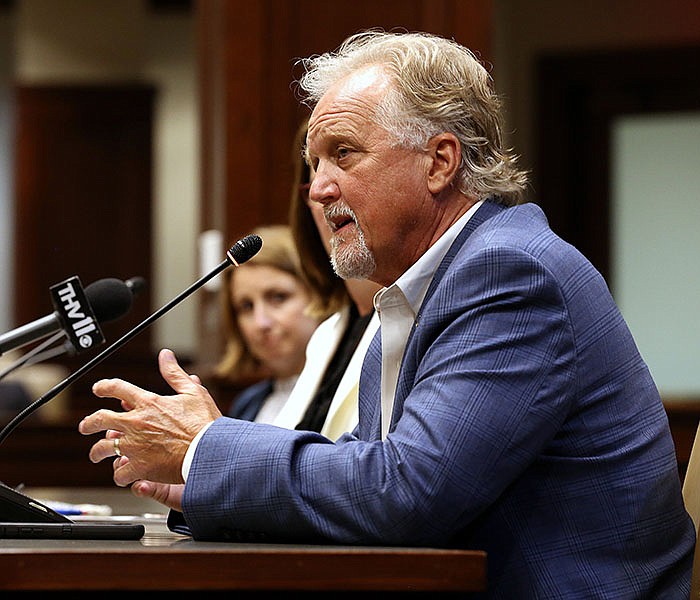 Marion schools Superintendent Glen Fenter told lawmakers Wednesday that his district is the “canary” that is warning of the dangerous effect Act 1002 will pose for education. “We simply need the ability to protect our students the best way can. If not, we are going to have another school year where our students don’t learn and another interruption in our economy. Not just in Marion but all across Arkansas.” (Arkansas Democrat-Gazette/Thomas Metthe) 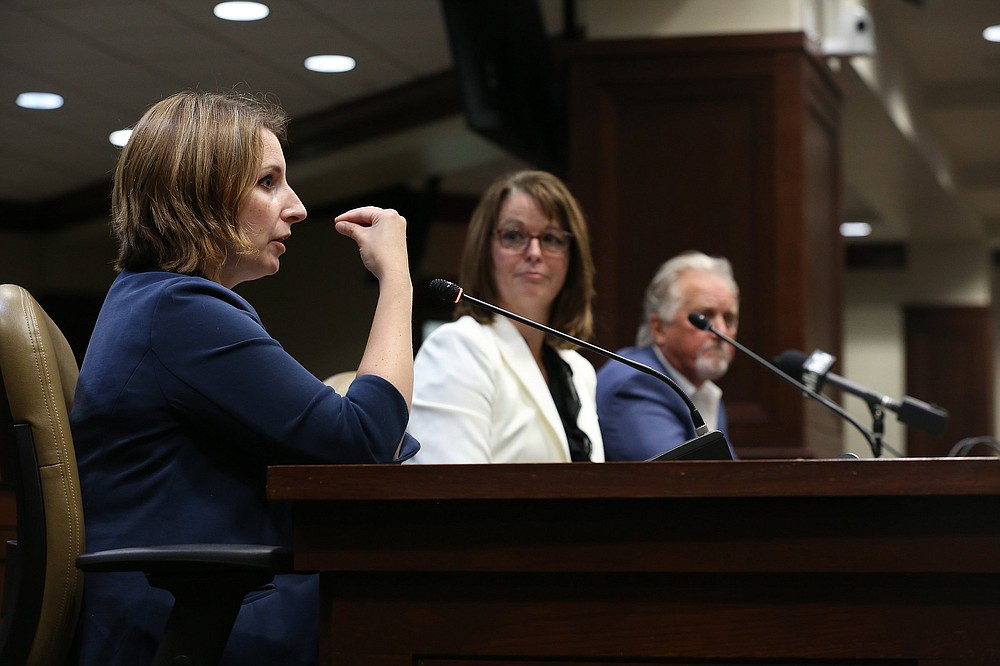 “We have not seen any children being hospitalized as a consequence of wearing a mask but right now with this delta variant we are seeing the rates of covid-positive children in our hospitals rising astronomically,” Dr. Heather Young (left) said Wednesday. (Arkansas Democrat-Gazette/Thomas Metthe)