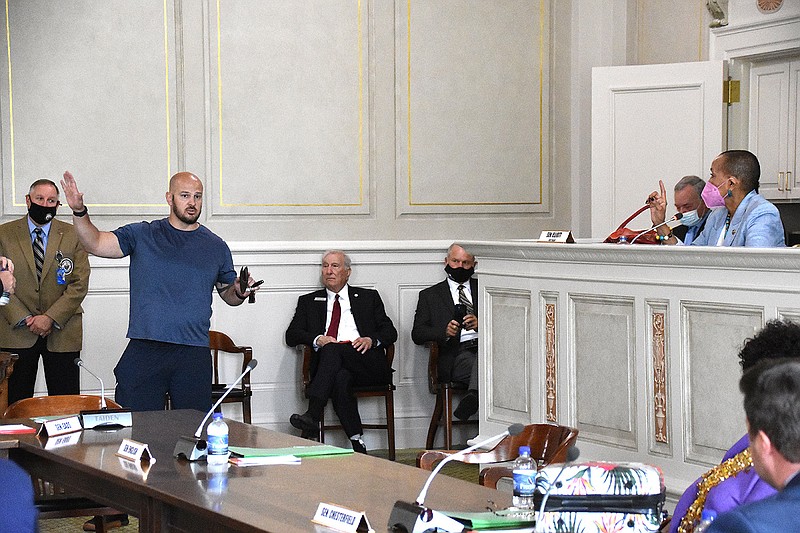 Sen. Trent Garner (left) interrupts an unofficial meeting on the state mask mandate Thursday at the Capitol in Little Rock as Sen. Joyce Elliott (right) presides. Garner said the “secret meeting” was inappropriate “so I came up here to voice my displeasure in a fashion that everyone would know my position on it.” Elliott said later that Garner had a “meltdown” and just wanted to cause chaos and called him “a bully.” (Arkansas Democrat-Gazette/Staci Vandagriff)

Two senators had a heated exchange Thursday morning during an unofficial meeting in the Old Supreme Court room in the state Capitol, an indicator of tensions over a state law banning most government entities from mandating use of masks.

The Senate Education Committee's meeting ended Thursday morning before testimony could be taken from members of the public about a proposal on masks in public schools. Sen. Joyce Elliott, D-Little Rock, a committee vice chairwoman, and several other lawmakers decided to hear from those remaining in the audience, even though the meeting was over.

Sen. Trent Garner, R-El Dorado, entered the room and interrupted the discussion. He and Elliott had a loud war of words, according to video provided by an onlooker. Garner was the primary sponsor of the law banning mask mandates, Act 1002 of 2021.

"Afterwards I heard that Sen. [Missy] Irving had left and Sen. Elliott was holding a secret meeting out of the public view of the livestream," Garner said in an interview. "I decided that was inappropriate for such a controversial and critical issue so I came up here to voice my displeasure in a fashion that everyone would know my position on it."

Elliott, in a separate interview, said Garner had a "meltdown" and just wanted to cause chaos.

[Video not showing up above? Click here to watch » arkansasonline.com/86senators/]

"There was absolutely nothing being done out of the ordinary," she said. "I don't know what his thought process was for doing that. He is a bully and he chose to handle that in his fashion. I will not be bullied into stopping a meeting by any senator."

Senate Bill 2, by Sen. Alan Clark, R-Lonsdale, was filed at 10:50 a.m. Wednesday, according to the Arkansas General Assembly's website.

SB2 would allow school boards to establish policies concerning quarantine requirements and mask mandates but permit parents or guardians to transfer out of their assigned districts based on that policy.

Irvin, a Republican from Mountain View who is the committee chairwoman, declined to allow discussion on SB2 about 9 a.m. Thursday, saying Senate rules state that "no bill or resolution introduced and referred to a committee may be considered until at least one intervening day occurred between the day of referral and the day the committee meets to conduct their business."

Irvin said the bill didn't meet a "24-hour threshold" before discussion could take place. A two-thirds vote of the committee is required to bring up bills for consideration, she said. No one moved to suspend the rules and the meeting ended.

Around 40 to 50 people had gathered in the Old Supreme Court chamber to listen or speak at the meeting.

"People wanted to be heard and I took the initiative," Elliott said of why she talked to them after the meeting was over. "Some people might not be able to come back tomorrow and some people might have driven a long way to speak about this issue."

Elliott said that about five other committee members also stayed behind to listen. She said they were in the middle of the comments when Garner entered the room and interrupted them.

"He busted into the room in his gym clothes and started demanding to know what was going on," Elliott said. "I explained to him what was happening, but he persisted in interrupting the meeting and I persisted to not let him."

Garner said he learned about the gathering when he called a committee member to ask how the meeting went. He said he decided something needed to be done.

A video that made the rounds on social media showed Garner and Elliott yelling at each other before he left.

"Understand this wasn't an official meeting," Garner told the Arkansas Democrat-Gazette. "Sen. Elliott didn't reserve the room. I, as a citizen, am allowed to come into a public place and voice my opinion, assuming I don't break any kind of laws, which I didn't. This was less of me being a senator and more of me being a citizen who cares for government transparency and doing the work of the people in an open fashion."

Elliott said the discussion continued after he left.

"I wasn't going to stop a meeting due to an outburst by Trent Garner," she said.

"Any legislator including Garner has the right to listen to the people," she said. "Nothing about this meeting was official. The only official thing about it was there was an informal hearing to allow people to speak."

Elliott said there was no need for Garner to interrupt the meeting in that manner.

"He came in to put on a show," she said. "It was nothing more than showmanship, which he is known for doing. ... He could have easily walked up to me and asked me personally instead of causing this meltdown, but that was the point. He wanted to cause chaos."

The past few days at the state Capitol have been filled with discussion and debate about whether to allow public schools to mandate the use of masks.

"I think when you have a serious and contentious issue like forcing parents against their will to do big government mandates, then I think it draws out passion," Garner said. "With that being said, I wouldn't have interrupted an official meeting because that is against the Senate rules and I respect the rules, but when you have an unofficial meeting that is done in the hour of darkness, it's important to point that out and bring it to a head."

Elliott said she doesn't think the incident will play out well in the public eye.

"I think most people will think these people should have a chance to speak," she said.