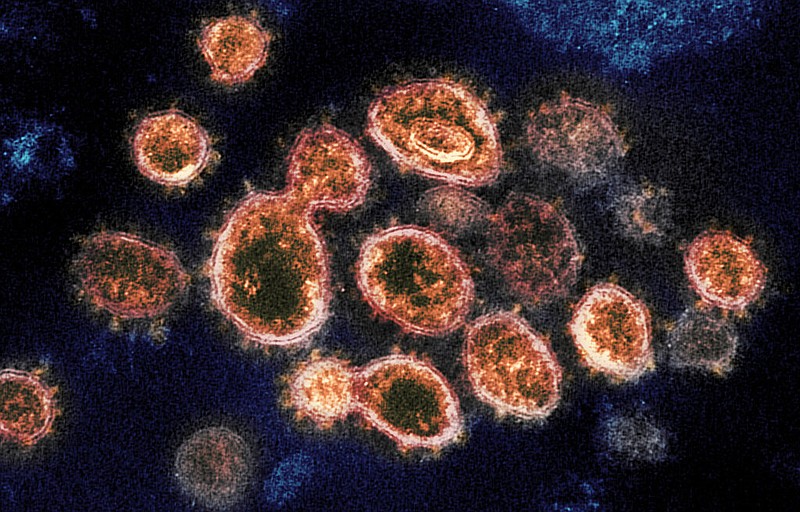 This 2020 electron microscope image provided by the National Institute of Allergy and Infectious Diseases - Rocky Mountain Laboratories shows SARS-CoV-2 virus particles which cause COVID-19, isolated from a patient in the United States, emerging from the surface of cells cultured in a lab. Viruses are constantly mutating, with coronavirus variants circulating around the globe. (NIAID-RML via AP)

An 11-year-old girl from West Memphis died this week of complications from covid-19 and other ailments, her family said Thursday.

The morning of July 30, Jordyn Franklin woke up with cold symptoms, and by Monday she was being rushed to the hospital, with paramedics performing several minutes of CPR, before she passed away later that day at Baptist Memorial Hospital-Crittenden.

Her mother, Caylenn Franklin, had scheduled a Monday doctor's appointment, but when she went to wake her daughter, Jordyn was unresponsive, said Kristen Clark, Jordyn's aunt.

"Her eyes started rolling to the back of her head. We called 911. The ambulance came, and it took them 5 to 10 minutes to get her stabilized," Clark said. "They did CPR, and once they got to the hospital they called in a helicopter to fly her to Le Bonheur [Children's Hospital]."

Jordyn died before she could be transported.

"They tried everything they could. Her brain went without oxygen for 10 minutes," Clark said. "From start to finish, it all only took maybe an hour and a half. I think that's where my family is having such a hard time understanding. An hour and a half. It was a nightmare, and a blink all at the same time."

Crittenden County Coroner William Wolfe said the cause of death was morbid obesity, diabetes and complications from covid-19. Jordyn was pronounced dead at 1:15 p.m. Monday.

State Epidemiologist Jennifer Dillaha confirmed Thursday that the state had recorded its third death of a child from covid-19.

"I think we're seeing children who are a lot sicker than before," likely because of the delta variant that first emerged in India and has become the predominant coronavirus strain in the United States, Dillaha said.

She said the 45 children younger than 12 who were hospitalized with covid-19 last month and the 15 virus patients age 18 and younger who were admitted to intensive care units both set state records.

Arkansas Children's Hospital had a total of 23 covid-19 patients Thursday at its hospitals in Little Rock and Springdale, up from 19 a day earlier and just short of the record 24 patients it had on July 27, spokeswoman Hilary DeMillo said.

The patients Thursday included 10 who were in intensive care and five who were on ventilators.

None of the patients had been fully vaccinated against covid-19, and more than half were ineligible to receive the vaccine because they are younger than 12.

Clark said her niece had been under the care of Arkansas Children's for obesity for a few years.

"My sister kept her as safe as possible because of her conditions," Clark said.

"The odds were against her. She kept her at home last year instead of sending her to school to try to keep her safe. They wore the masks. My sister was on it, sanitizing, handwashing and social distancing. They didn't go out a lot. Even when things were lightening up just a tad bit, she kept up the precautions."

The parents were not vaccinated, Clark said. Jordyn was too young to receive the shot.

Cayleen Franklin developed covid-19 the previous week, but it was a mild case, Clark said.

"My sister is not doing good. She had to get medical treatment for her nerves," Clark said. "This is real. You can't really understand or grasp the concept until it hits home. Nobody is safe. It took an 11-year-old baby. It doesn't matter the age; it's not a discriminator of anybody. Follow the guidelines and do everything you can to protect yourself and others."

Clark declined to comment when asked if the family would get vaccinated now.

"To know Jordyn was to love her," Clark said. "She gave the best hugs and was just the sweetest, sweetest child. I hate that this virus took her away from us."

Clark said Jordyn was a straight A+ student who was looking forward to going back to school.

A candlelight vigil is being held from 6 p.m. to 8:30 p.m. today at Jackson-Wonder Elementary School in West Memphis. The family requested that masks be worn and to bring either pink, purple, white or silver balloons.

Funeral arrangements have not yet been made.