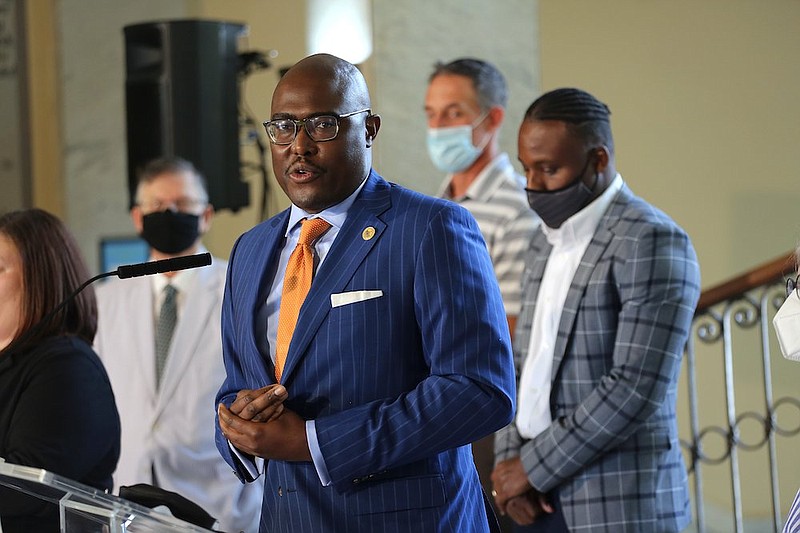 At a City Hall news conference, Scott suggested that the city had been forced to backtrack as coronavirus cases surge in Arkansas and concerns arise about the delta variant.

No one expected 17 months of a pandemic in March 2020, Scott said. And likewise, they did not expect the emergence of the highly infectious delta variant when virus numbers were thought to be in permanent decline, he said.

Scott said that "things are [worse] today than it was a year and a half or so ago."

Meanwhile, the state senator who sponsored the prohibition on mask requirements said Scott's order would be struck down. Still, city officials defended the mandate.

[Video not showing up above? Click here to watch » arkansasonline.com/86lrscott/]

Flanked by several members of the city board as well as the city attorney, Scott acknowledged the inconvenience of masking up.

"Now I understand, [as] someone who puts on a mask quite often, my glasses get fogged up; it makes me sweat. It is a very uncomfortable thing," Scott said. "But right now, we have to be uncomfortable to protect the public safety, health and welfare of the residents of Little Rock."

In May, Scott ended the city face-covering requirement after new advice from the U.S. Centers for Disease Control and Prevention on the wearing of masks by fully vaccinated people.

But on Thursday, the mayor said the city's covid-19 task force had recommended to him that masks be worn again in public spaces for which the city is responsible. He strongly exhorted businesses to follow suit.

Scott noted the many children who visit city parks and community centers and who will be returning to school later this month, adding that "right now, they don't have the ability to mask up."

The mayor's executive order signed Thursday amends an earlier emergency declaration on masks issued in the aftermath of Gov. Asa Hutchinson's decision in March to end a statewide mask mandate.

Scott's order says face coverings are to be worn by visitors to city facilities or property that is under the city's control and ownership.

A news release issued after Scott's news conference said the order takes effect today and applies to indoor public spaces owned or operated by the city.

Members of the public are "exhorted" to wear face coverings in other situations, such as in stores or riding public transit. Scott's measure, however, does not require people to wear masks while driving or in private businesses open to the public, according to its text.

The language of the order issued Thursday is slightly less broad than the earlier face-covering order, which required masks in all public places except where physical distancing of 6 feet or more was practical. Nevertheless, the latest order retains the previous version's exemption for private businesses open to the public.

Act 1002 of 2021, which took effect last week after Hutchinson signed the legislation in April, bars the state government along with local jurisdictions and school districts from instituting face-covering mandates.

The law -- which has been challenged in court -- is now the subject of a special legislative session Hutchinson convened this week.

Faced with mounting covid-19 cases and hospitalizations, the Republican governor has asked lawmakers to revise the law to grant public school boards the ability to mandate masks for students younger than 12, who are ineligible for vaccination.

It's unclear how the reinstated Little Rock mandate will withstand a potential legal challenge in light of Act 1002.

"We have no concern at all," Scott said Thursday. "We were very conscious in working with our city attorney. We believe that our power cannot be taken when it comes to protecting the residents and their public safety and health and welfare."

Asked if he expected push-back from state lawmakers, Scott said, "I wouldn't be surprised."

When legislators passed the bill, they sought to limit "local mayors who were drunk on power against the people," he said.

Garner added, "I'm not surprised to see Mayor Scott abuse his power. Weak leaders always bend the rules to their will. But I think that the citizens need to stand up and fight against that corruption."

He suggested the Little Rock mandate "will be easily overturned in court and cost the citizens of Little Rock large legal fees for this blatant disregard of the law."

Garner said he anticipates a resident might file suit against the city when faced with legal consequences for not wearing a mask and therefore lead to a court ruling against the city.

Tom Carpenter, the Little Rock city attorney, said in a phone interview that from his point of view the state law is unconstitutional because it interferes with property rights and the local government's police power to protect its residents.

In addition to stepping on property rights without the intention to pay for it -- something that is unfavorable given Arkansas' emphasis on the law of property -- Carpenter said that while Act 1002 "talks about masks it doesn't say anything about interfering with the police power at the local government."

He added, "And that means that it's an improper action by the Legislature."

Little Rock remains under a state of emergency, which is to expire at the end of this month unless extended. The mayor's mask mandate issued Thursday will remain in effect until Aug. 31.

Scott's action was taken after the Board of Directors' decision on Tuesday to approve a symbolic resolution urging lawmakers to reconsider Act 1002 to allow local jurisdictions to enact a mask mandate if they are in an area of high transmission of the virus as determined by the Arkansas Department of Health, either alone or in cooperation with its federal partners.