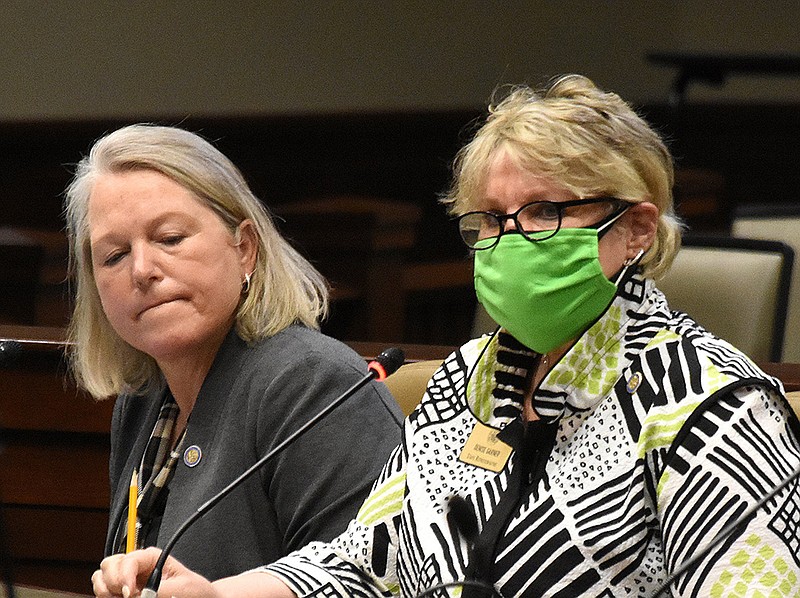 Arkansas House Minority Leader Tippi McCullough (left) and Rep. Denise Garner, D-Fayetteville, present House Bill 1004 Thursday in the House Public Health, Welfare and Labor Committee meeting. McCullough said “if we can use everything we know that’s evidence-based to keep kids safe, that seems to be the best way to go forward to keep our schools open.” More photos at arkansasonline.com/86session/. (Arkansas Democrat-Gazette/Staci Vandagriff)

Arkansas lawmakers, meeting in a special session to consider easing a ban on mask mandates for schoolchildren on Thursday voted down two bills that would have allowed local school boards to mandate covid-19 face coverings in certain instances.

Gov. Asa Hutchinson had called the special session, asking the Republican-majority Legislature to alter a law to allow public schools to implement masking protocols for educational facilities where children under 12 are present during the coronavirus pandemic, and to affirm his decision to end supplemental federal unemployment programs. The special session began Wednesday.

Act 1002 of 2021, which the governor signed, prohibits most state and local entities, including public school districts, from requiring face coverings.

Both bills considered Thursday had sparked hours of questions and testimony in the House Committee on Public Health, Welfare and Labor over the past two days, though lawmakers had acknowledged they were unlikely to pass the bills.

Legislative leaders said they expect the session to end today after both chambers convene at 8:30 a.m. to approve bills giving the state Division of Workforce Services authority to halt federally funded unemployment programs, and without taking action on masking.

On masking, committee members heard House Bill 1004 by House Minority Leader Tippi McCullough, D-Little Rock, which would have allowed mask mandates meeting the standards laid out in the governor's call to be enacted, as well as House Bill 1003 by Rep. Julie Mayberry, R-Hensley, a narrower bill that sought to permit school boards to vote to approve face covering requirements lasting up to 60 days if there is a 14-day coronavirus infection rate of at least 50 new infections per 10,000 district residents.

While the committee met, Little Rock Mayor Frank Scott Jr. announced a mask requirement for people in buildings owned and operated by the city. Earlier in the day, the Little Rock and Marion school districts sued to overturn Act 1002.

A court hearing in a separate case, filed on behalf of two parents, seeking to halt enforcement of the law is scheduled for 9:45 a.m. today in Pulaski County Circuit Court.

McCullough said she wanted to "simply give local school districts the opportunity to determine what's best for their children and their districts."

"Masks are one of the best tools to prevent the spread of covid and its variants," she said. "The delta variant is growing like wildfire, and the new school year's about to start. ... If we can use everything we know that's evidence-based to keep kids safe, that seems to be the best way to go forward to keep our schools open."

The committee heard from parents who said they wanted their school boards to have the option to implement that measure and testified to the efficacy of masks. None of the three vaccines in use are open to children younger than 12 under guidelines from the U.S. Centers for Disease Control and Prevention.

"Masking works best when everyone is masked, not just the people who choose to send their students to school in a mask," Little Rock School District parent Kayce Green said.

Others, arguing that the choice should be made by individual parents and families, made false claims about masks, the virus and testing. Some said masks cause overexposure to carbon dioxide, which experts say is untrue. One woman asked that state Health Secretary Jose Romero to prove the existence of the coronavirus.

Following HB1004's failure, Mayberry attempted to amend HB1003 based on feedback from when she first presented it to the committee Wednesday, adjusting the 60-day limit to 21 days and lowering the 14-day infection rate threshold that would enable school boards to vote on a mask mandate to 30 new known infections per 10,000 district residents. Wednesday's committee meeting lasted about three hours.

In divided voice votes, the committee declined to adopt the changes to Mayberry's bill, then rejected the unamended bill without discussion.

"We heard a lot of people speak yesterday and today, we got a lot of new information, but I think the general feeling in this committee was that they felt like the parents should make the decision instead of the school board. It's as simple as that," the committee chairman, Rep. Jack Ladyman, R-Jonesboro, said afterward. "I think everybody is concerned about our kids and as everybody said, one child dying is one too many, but there's just differences of opinion on how we protect our children."

One committee member, Rep. Jim Dotson, R-Bentonville, had said Wednesday that he was receiving roughly three times as much communication from constituents not in favor of dialing back Act 1002 as from those who were, and that he was a limited government conservative who leaned toward "individual choices and responsibility rather than government mandates."

Mayberry said she was "at a loss" after the meeting on how to mitigate the virus' spread in schools and that maybe schools could push back their start dates.

Hutchinson, a term-limited Republican, said he was disappointed by the committee's actions and referred to the situation at an east Arkansas school district that began classes July 26 and had 839 students and staff members in quarantine because of covid-19 exposure as of Thursday, according to the superintendent.

"It is conservative, reasonable and compassionate to allow local school districts to protect those students who are under 12 and not eligible for the Covid-19 vaccine. The cases and quarantines at the Marion School District during the last week illustrate the urgency of action. If we are going to have a successful school year then the local school districts need to have flexibility to protect those that are at risk," the governor said in a statement Thursday evening.

At a news conference Thursday evening, House Speaker Matthew Shepherd, R-El Dorado, said he didn't "see really any other options at this point as far as any other piece of legislation" to address mask requirements in public schools and that he was working toward adjourning the special session this morning. Shepherd had previously expressed doubt that there was sufficient support in the House to approve Hutchinson's proposal.

"We're out of time," Shepherd said.

Earlier in the day, Mayberry had attempted to put her bill on second reading for amendment on the House floor, a motion that was rejected.

House Majority Leader Austin McCollum, R-Bentonville, said some members of the chamber may not have wanted to vote for a measure that didn't have support in the Senate, but it was difficult to parse which representatives voted against the motion for that reason and which personally oppose it.

"My understanding from visiting with members as to why the nos were louder than the yeses was from public health [committee] members saying, why would we go through this process again in committee if it's dead on arrival in the Senate, and that's the message that we're receiving from the Senate at this point," he said.

Senate President Pro Tempore Jimmy Hickey, R-Texarkana, told reporters Thursday that there was not a consensus in the Senate to grant school boards the authority to decide whether to require students who are younger than 12 to wear masks.

Hickey said he favors allowing school boards to decide whether to require students younger than 12 to wear masks.

"I feel like this is a choice for the people to make, the parents," he said.

Hill, a former Cabot School Board member, said he had "realized that each time you wear a mask and, if you have it on all the time especially when you are a young child, it affects your thinking, your breathing and everything else."

"It just causes a lot of trouble as far as being able to think," he said. "If the parents send their kid to the school with a mask on more than likely that kid is going to take it off when he gets there, so I feel like we need to leave it up to them. If a parent can't keep a mask on their kid, that's their problem as a parent."

Hill said he has heard from school board members who "would like for us to make this decision on the state level instead of sending it down to them because they know it is a no-win situation."

He said no one wants to see a child's death as a result of covid-19. There have been three pediatric deaths from covid-19 in Arkansas, and doctors say more children are getting sick because of the more-transmissible delta variant than from the original strain of the virus.

"I guess we'll have to look at it and evaluate everything," he said. "Children are tough and are a lot more resilient. Their bodies hold up better than ours do, and we'll just pray and hope that no one gets sick."

Meanwhile, at the White House on Thursday, Hutchinson received praise from President Joe Biden's administration for his efforts against covid-19.

At a news conference, U.S. Education Secretary Miguel Cardona was asked about efforts by several states to prohibit mask mandates.

"We're seeing places where school districts want to mandate masks but, obviously, state leaders are saying they can't do that," the reporter said, asking what tools the department has at its disposal to respond.

"We're going to constantly work with those states, with those leaders. At the end of the day, we're on the same team for the kids, right?" Cardona said. "I applaud Gov. Hutchinson for what he's doing, and I recognize that we have to be malleable to address the increase in spread and that requires partnership," he said.

White House Press Secretary Jen Psaki also held up Arkansas' governor as an example of a Republican governor who is "doing exactly the right thing" to address covid-19.

Psaki, who appeared with Cardona, was later asked whether the administration would try to "elevate the voices of Republicans" who are addressing covid-19.

"The majority of Republican governors, also, are doing exactly the right thing in their states. I mean, we talked about Asa Hutchinson earlier. There are a number of governors across the country who are either working with the federal government on resources we can provide, encouraging vaccination, encouraging masking. This is not political to us, nor should it be political," she said.

Information for this article was contributed by Michael R. Wickline and Frank Lockwood of the Arkansas Democrat-Gazette. 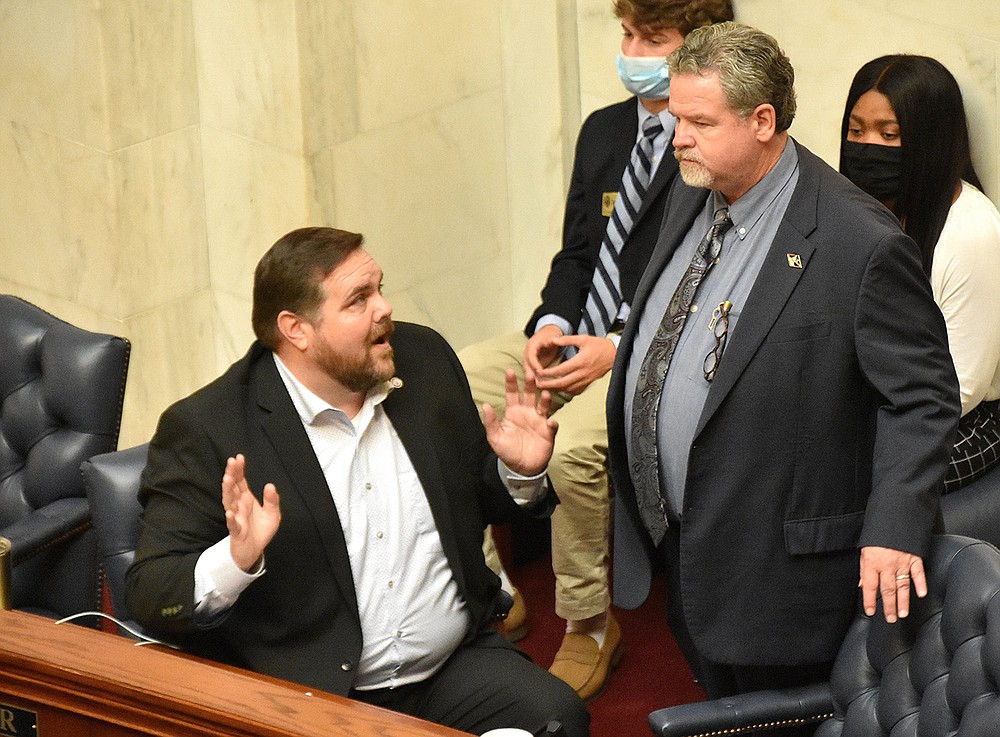