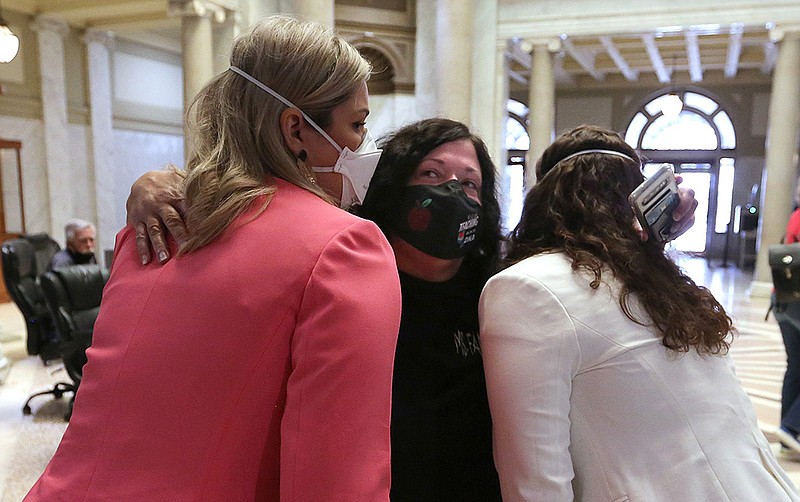 A Pulaski County judge Friday barred authorities from enforcing the state's recently enacted ban on government mask mandates for the time being.

Fox's order is temporary, lasting until a full trial can be held on the legality of Act 1002 of 2021, passed in April by the General Assembly to prohibit government agencies from requiring masks, which public health officials have said are a deterrent to the spread of the coronavirus.

That proceeding has not been scheduled, but the judge said he wants to expedite it so the Arkansas Supreme Court can make the final ruling on the inevitable appeal.

Hutchinson said he would not enact a statewide mask mandate, though the ruling gave him the authority to use his emergency powers to do so.

"[Act 1002] needed to be changed because of the new reality with the delta variant, but it failed to recognize the limits on legislative authority over the different branches of our state government," the Republican governor said.

[Video not showing up above? Click here to watch » arkansasonline.com/87ruling/]

The ruling was issued hours after lawmakers gaveled out of a special session that Hutchinson called for the purpose of allowing local school boards to implement masking protocols for academic facilities where children under 12 are present. Lawmakers left without enacting legislation granting that flexibility.

Act 1002 has been in effect for about 1½ weeks, barring all government entities from requiring face coverings with exceptions for prisons, juvenile detention facilities and state health care operations.

Veronica McClane and Ashley Simmons, parents of children too young to be vaccinated, challenged the law, and their suit was joined by the school districts of Little Rock and Marion along with Pulaski County's County Judge Barry Hyde and Sheriff Eric Higgins.

The parents and schools complained that the mask-requirement ban prevented them from protecting children, especially ones too young for vaccination, from covid infection, while the sheriff and county judge said the prohibition interferes with their efforts to keep county offices and the jail safe.

The ban "violates the equal protection provisions of Article 2 of the Arkansas Constitution, in that it discriminates, without a rational basis, between minors in public schools and minors in private schools," where mask requirements are permitted, the judge stated in his decision.

The law also conflicts with Amendment 55, which gives county judges authority over county property, and Amendment 80, which makes the state Supreme Court solely responsible for judicial rule-making, including any decision about requiring face coverings for courts, the judge said.

"Act 1002 of 2021 ... facially violates the separation of powers clause in that it attempts to usurp the constitutional authority granted to county judges over county buildings and property [and] the exclusive superintending authority concerning the procedures and conduct of the courts of the state that is granted to the Arkansas Supreme Court," Fox stated in his four-page ruling.

Friday's hearing lasted about an hour and included restrictions on attendance to allow for social distancing in the courtroom. Fox required everyone to be masked and limited attendance, limiting the number of attorneys in attendance as well as spectators.

The judge had planned to broadcast the proceedings over the internet to make them publicly accessible, but technical difficulties prevented that, which included someone broadcasting "worse than inappropriate things" over the video link established by the court, Fox said. The judge said he will refer the matter to law enforcement officials.

State lawyers were reviewing Fox's ruling and determining how to proceed late Friday.

Asked whether he would enter a court filing in support of keeping Fox's ruling in place, Hutchinson said he would need to see how the case develops before determining whether he should have representation separate from Attorney General Leslie Rutledge's office. If the case is appealed to the state Supreme Court, there would be a conflict, and Hutchinson said he wanted to be able to have his "independent voice."

"I want to be able to speak to the court directly about my views on Act 1002," he said.

Hyde said that the state's largest county would reinstate a mask mandate effective Monday in all county buildings "unless you are vaccinated and have the wristband issued" by county human resources officials.

"The entire structure of our government in this state is to allow local governments to be responsive as quickly as possible in a matter of crisis," Hayes said. "And when there are preemptions to that it usually causes -- just from a practical standpoint -- a very difficult set of circumstances."

Now freed up to do so by Fox's ruling, Hayes said he expects government bodies around the state to institute mask mandates especially at county jails, courtrooms, city halls and some sporting events.

"I don't know if it will go as far as it did when we first started all this, but I do think you'll see some of those things pop up across the state," Hayes said.

"I highly recommend people wear their masks, but to mandate it -- I'm not going to do that right now," Hartwick said.

Violation of the mandate will subject an individual to a fine of up to $500 or 30 days in jail.

Public school districts across the state began contemplating Friday how to proceed with the fast-approaching school year in light of Friday's ruling.

Ali Noland, a member of the Little Rock School Board that voted 7-1 earlier in the week to sue the state and governor over Act 1002, welcomed Fox's decision.

"I'm glad that, by taking this issue to court, LRSD was able to make school safer -- not just for our own students and staff, but also for children and school employees statewide," Noland said.

The Little Rock district starts classes Aug. 16, as do most but not all schools in the state.

Two that have started are the Marion School District and the eStem Public Charter Schools Inc.

"Obviously, we were pleased with the judge's ruling today blocking enforcement of the state's misguided law which took power away from local districts to protect their students," Marion School District Superintendent Glen Fenter said a prepared statement Friday afternoon.

The 4,000-student Marion District, which started classes July 26, has since had to quarantine well over 800 students.

"We will be spending the coming days visiting with our lawyers and exploring what the best option will be for students in the Marion School District," Fenter said. "We will work with our school board to enact a suitable policy. The safety and wellness of our students is our top priority, and we are committed to creating a safe environment for learning,"

"We began this week with a masks 'strongly encouraged' message but will likely be adjusting based on Judge Fox's ruling today," John Bacon, the chief executive officer, said. "Based on my observations, I would say we were probably at an 80[%]-90% mask wearing level in all schools this week."

Bacon noted that just two of the covid cases and nine people quarantined included people who were on campuses this week. The other virus cases and exposures occurred before those people were on campus.

Linda Remele, president of the School Board for the Pulaski County Special School District, said she anticipates a board vote at Tuesday's meeting on the mask issue but was uncertain Friday on the specifics.

"I hate masks, but in light of what is happening in our state I will support masking the entire district for now," Remele said. "I would like to be able to frequently revisit the policy during the year."

The Bentonville School District on Friday announced that a special board meeting will be held at 5:30 p.m. Wednesday to consider possible revisions to the district's current stance on face coverings in response to Fox's decision.

Bentonville's school administration is encouraging anybody who is not fully vaccinated to wear masks indoors.

Alan Wilbourn, a spokesman for the Fayetteville School District, said administrators are discussing the judge's decision but that the district would have no comment Friday. Trent Jones, director of communications for the Springdale district, also declined to comment.

Jeremy Owoh, superintendent of the Jacksonville/North Pulaski School District, said Friday that no decisions have been made on how to proceed. He suggested that a mask-wearing mandate will be applied to everyone but that it depends on other covid-19 protections in place.

Sophomores and juniors who will be attending the residential Arkansas School for Mathematics, Sciences and the Arts in Hot Springs are scheduled to move into their rooms today.

Incoming students will take covid-19 rapid tests upon arrival before being allowed to officially move in, spokesman Donnie Sewell said, adding that the testing is an effort to prevent active covid cases from arriving at the publicly supported campus that serves gifted and talented high schoolers.

Corey Alderdice, the school's director, was one of the school administrators who signed a recent letter encouraging flexibility in returning power to local districts and higher-education officials to consider mask mandates. The school is waiting on new guidance from the University of Arkansas System, of which it is a part.

Alderdice in a memo Friday to students, families and employees was complimentary of efforts to date to wear masks on campus.

"While it still appears premature to re-implement our policy on masks, " he wrote, "I want to speak in plain words on the subject: For the safety of our students and colleagues, along with the preservation of ASMSA's residential experience, all members of our community of learning should wear a mask while on campus. Over the next several days, I am hopeful that the previous sentence will be revised from 'should' to 'must.'"

The Arkansas State University System was reviewing the ruling and had no other comment Friday, spokesman Jeff Hankins said.

Officials at other public universities said much the same.

"After the court order is entered, we will review the judge's decision and seek additional legal guidance on this issue. In the meantime, we will continue to adhere to the laws and policies as they exist today," University of Arkansas at Fort Smith Chancellor Terisa Riley said in a statement.

Should the law change, "we will evaluate the situation in Sebastian County and on the UAFS campus before making any decisions regarding mandating masks."

Riley joined top administrators from every four-year public university in the state and almost every two-year public college in a letter earlier this week asking lawmakers to allow colleges to make decisions about face coverings.

"I do believe that educational institutions in areas hardest hit with high numbers of COVID cases, stressed hospital capacities, and low rates of vaccination should have options to temporarily reinstate mask mandates for their individual institutions in order to mitigate risk to their communities," Riley said. 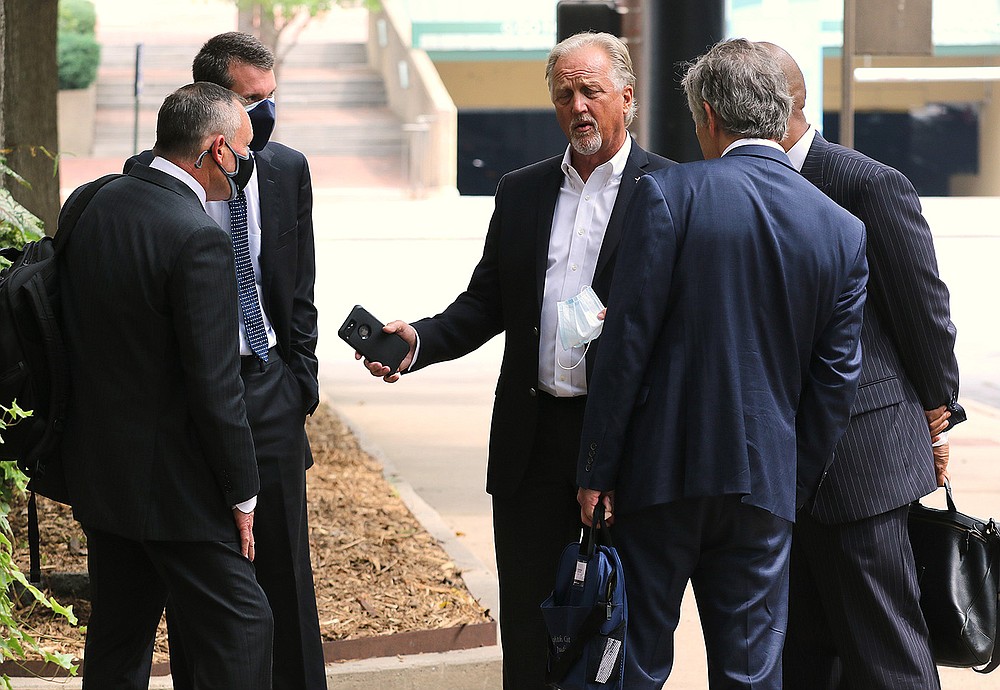