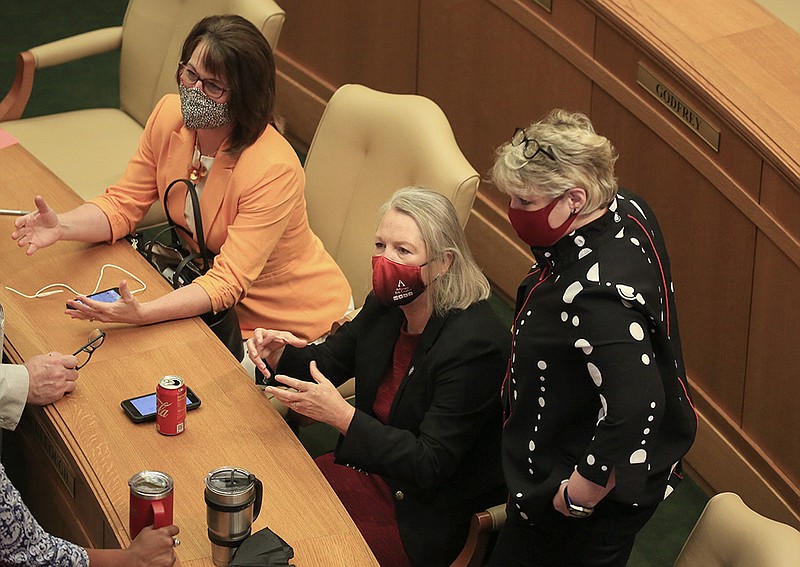 The Arkansas Legislature on Friday ended its three-day special session without making the change sought by Gov. Asa Hutchinson, to allow public school districts to require children under age 12 to wear masks in hopes of containing the spread of the coronavirus.

The Republican governor said he's disappointed that his "primary mission" in calling the special session was not accomplished by the Republican-dominated Legislature.

But Hutchinson, who is an attorney, said his goal had been accomplished not by the Legislature, but by Pulaski County Circuit Judge Tim Fox, who issued a preliminary injunction blocking the state from enforcing the ban set in Act 1002 of 2021. The law forbids most state and local governments, including public schools, from setting mask mandates.

Hutchinson acknowledged last week that legislative leaders advised him it would be "a heavy lift" to change the law. The governor sought to limit the change to children under age 12 because they cannot be vaccinated at this time.

Two bills aimed at implementing the governor's request to change the state law failed to clear the House Public Health, Welfare and Labor Committee on Thursday, despite a recent surge in Arkansas of virus cases, hospitalizations and deaths. On Friday, the state topped 400,000 in total covid cases since the first case in March 2020.

Asked whether the special session was a waste of time and state resources, Hutchinson said, "It's never a waste of money to give a legislature the opportunity to do the right thing."

He said he was grateful for lawmakers' action on the other matter in the special session, which was ending supplemental federal unemployment benefits. He said that was an important decision that needed to be resolved urgently.

Wright's temporary injunction against Hutchinson's order affects some 69,000 unemployed Arkansans who had been receiving weekly $300 federal supplements to their regular state unemployment compensation benefits. The ruling has been appealed to the state Supreme Court.

The governor's decision -- similar to those made by other Republican governors -- ended Arkansas' participation in the program with 10 weeks of benefits still available. Nationally, the federal pandemic-assistance supplements end Sept. 6.

The Senate on Friday voted 18-14 to approve a motion by Senate President Pro Tempore Jimmy Hickey, R-Texarkana, to adjourn the special session before an attempt was made to ask the Senate to vote on resolutions to extend the session by up to 15 days to consider other bills not on the governor's call for a special session, which is allowed under the Arkansas Constitution.

Sen. Trent Garner, R-El Dorado, subsequently tweeted, "Today, many of us showed up to work on important issues like banning #CRT [critical race theory] and protecting your privacy in regard to vaccines. Unfortunately, the Senate adjourned before we could do any of that important work," and posted the Senate roll call to adjourn the special session.

In a divided voice vote, the House voted to adjourn the special session.

The House's action came after House Speaker Matthew Shepherd, R-El Dorado, said the Senate had adjourned, so the House won't be able to act on any resolutions that would open the door to consider other bills.

Senate Republican leader Scott Flippo of Mountain Home said, "I think the special session was somewhat a waste of time.

"As far as the premise for what the reason for the call was, to deal with masks [in the public schools], the votes were never there," he said.

"Throughout the course of this week, we did not pick up votes [for changing Act 1002]. We ended up losing more votes. From the mask standpoint, it was the not the most effective use of time," Flippo said.

He said the Legislature backed the governor's decision to end the state's participation in federal unemployment assistance programs because that "is important to a lot of our constituents in the business community, so we addressed that."

"But I submit that that is a small sample versus the true amount of people that have an interest in, and key issues like this are much better handled on a local basis," he said. "This is the culmination of six years of taking local control away, and the Republican Legislature has moved through the sessions to curtail local control and for a legislator to say this is trying to kill big government, that's laughable. Local government is certainly much smaller and on a more day-to-day basis with their constituents than state government or even the federal government."

Garner, who sponsored Act 1002, said the special session was "absolutely" a waste of time and state resources.

"I think everybody knew what the vote was before," he said.

"I think they wanted a dog and pony, and the governor tried to put the emphasis on us," Garner said. "The reality is he is trying take away that control from thousands of parents."

Shepherd said, "We came together as a body and considered issues that were important to our state, which is worthwhile.

"When the governor calls us into special session, we have a duty to meet and consider the issues presented," he said. "There may be disagreement as to what the outcome should have been, but the lengthy committee meetings illustrated how seriously we take our responsibility."

Sen. Jim Hendren, an independent from Sulphur Springs, said he doesn't believe the special session was a waste of time and state resources.

"I think it was important for the Legislature's voice to be heard," he said. "I think the governor made it clear that he wanted to not leave any stone unturned with regard to keeping kids under 12 safe at school, so I don't know that we ever had a special session that was more necessary because we never faced a crisis like we are facing today."

The Legislature "passed 50% of the bills on the call," Hendren said.

He said he encouraged Hutchinson to call a special session because "I do think that it was worth a try" to change Act 1002.

"To me at least, I wanted an opportunity to try do something to make school safe and get local authority back to school districts as they navigate this pandemic," said Hendren, whose uncle is the governor.

Hickey, who backed the governor's plan to change Act 1002, said whether to grant school boards authority to decide on mask requirements for students younger than 12 has been "the most contentious issue that we've had by far and especially in such a short amount of time."

"You try to talk to somebody about this, where there is so much misinformation that is out there," he said. "You have to try to dispel that, and then they'll go to another one that is misinformation and do that, and you got to do that all the way down to keep them from getting upset at you before you can ever talk to them about it. ... This is where regnus populace is running contradictory to what the best practice is."

In assessing the inaction on changing the mask ban, Hutchinson said, "There were a number of legislators, including Rep. Julie Mayberry, who took this seriously, supported a change and understood the risk to our children, and I applaud those legislators.

"But there were many who had a casual if not cavalier attitude toward this public health emergency and toward the remedy that I suggested to them in addressing the vacuum, really, of the age group that was not able to be vaccinated," the governor said. "What concerns me is that many are simply listening to the louder voices and not standing up with compassion, common sense and serious action."

Hutchinson said he believes that false statements people made about masks and covid-19 at meetings of the House Committee on Public Health, Welfare and Labor on Wednesday and Thursday reflect a minority of Arkansas' population.

"I think you have some that have put it off, getting a vaccination. I think you have some that have studied the issue and might have some unique health needs that they're concerned about and need to consult with a physician, and then you do have the small minority of the population that has adopted the myths, the conspiracy theories and have continued to spread those and that's harmful. It is not fact-based, and regretfully that has caught the attention of some legislators even, and so we expect more from those who are leaders to sort through that and to lead with compassion and thoughtfulness." 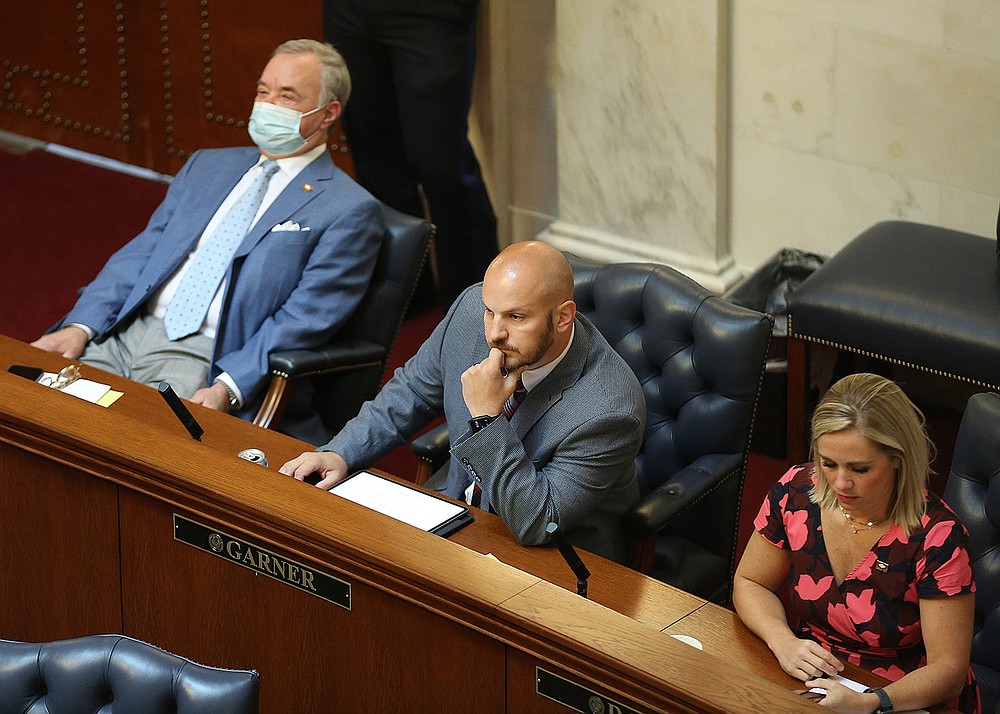 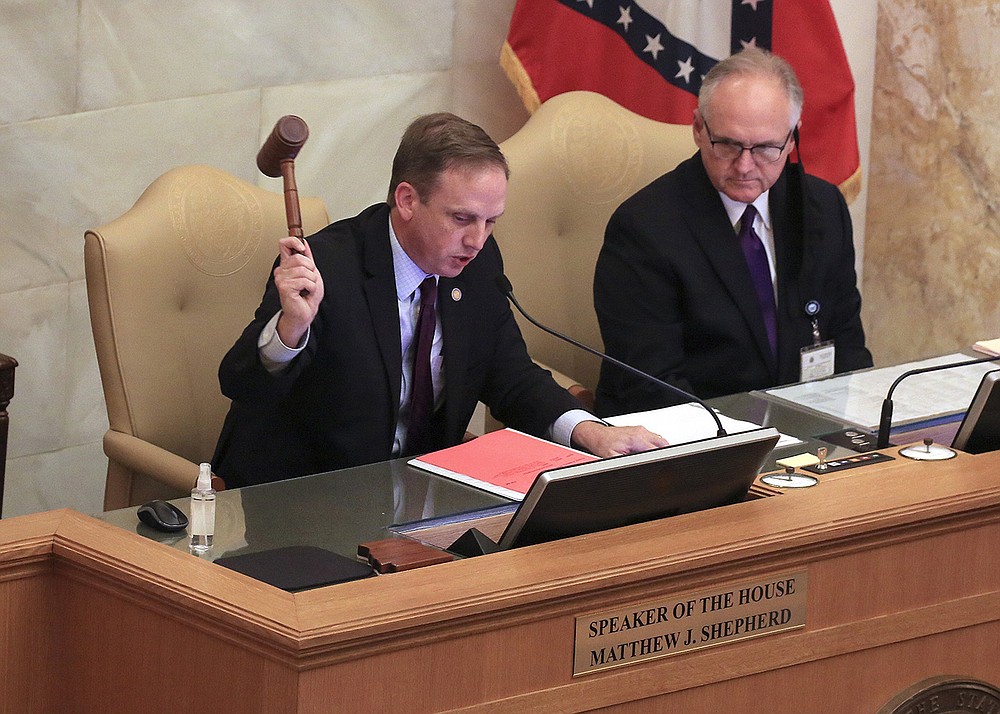