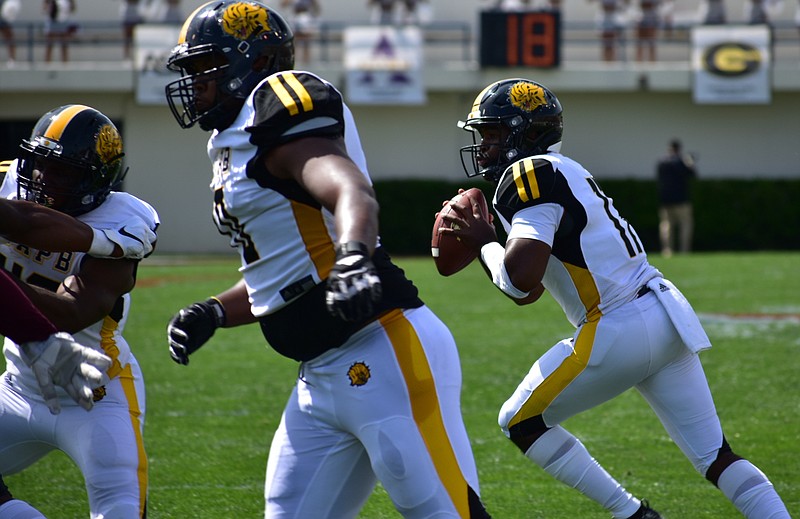 A little more than three months ago, the University of Arkansas at Pine Bluff football team played for a championship.

That left head coach Doc Gamble with a dilemma on his hands -- bring the players back during the summer term for workouts or give them some added time to get their legs under them for the fall.

"We played a real season in the spring," Gamble said, that ended with the Golden Lions to a 4-1 record after a loss to Alabama A&M University in the Southwestern Athletic Conference title game. "I wanted those guys back to make sure they're all the way healthy, but there's a fine line to making sure they're healthy. What that fine line is, I don't know."

So, Gamble opted to allow the Lions 2½ months off, bringing them back well in advance of the team's preseason camp, which began Friday.

"Do you bring them back? How do you weigh the pros and cons?" Gamble said. "The best thing to do was stay at home. They were eager to come back. They spent a long time away from home.

"It's the first time in the history of football that this has ever been done, to play in the spring and come back in the fall."

On the first day back in practice, which is closed to the media for the week, the Lions went through just that.

"It was a typical first day, just to remind you it's the first day of training camp," Gamble said. "It was the first day of the fall, just like in the past, getting the new guys acclimated to how we do things. It felt like a normal typical year-in, year-out first day of fall camp. It wasn't very pretty, but it was good at times."

Wideout and return specialist Tyrin Ralph, named a BOXTOROW Preseason All-American, was asked if the break left the Golden Lions recharged for a run at the fall SWAC championship, which would be UAPB's first since 2012.

"I wouldn't say recharged," the fifth-year Lion and graduate student said. "I just think we're going to be a better team than we were last year. I see guys in the locker room being hungrier. We've seen where we can get, but now it's time to win it. We see the mission we're on, but we have to take it step by step first."

Skyler Perry, a fourth-year starting quarterback, said he felt good returning with what he called a new team, although he's one of eight returning offensive starters and the Lions have at least seven on defense.

"It was just time for us to regroup and understand how we got there [to the championship game] and how to finish," Perry said. "Really, it's just getting everybody caught up, making sure they're on the same page. We also have new talent, so we want to get those guys caught up so we can do what we want to do and achieve our goals."

The goal of a championship slipped away on May 1 in Jackson, Miss., after UAPB led 26-18 at halftime. Thirteen penalties for 139 yards did the Lions no favors in a 40-33 loss.

"We've been there and that's what we're trying to go back to," Perry said when asked whether the championship loss is motivation for the fall season. "It's a mindset. You don't want to be stuck in the past. Time don't wait on anyone."

With so much experience on the team, Gamble doesn't have to be as concerned about filling any blanks on the starting lineup as he is about filling out a two-deep roster.

The biggest question Gamble said he wants to answer: Who's the next man up?

"Who's the next guy that can step in and compete, [and] be a key contributor?" Gamble said.