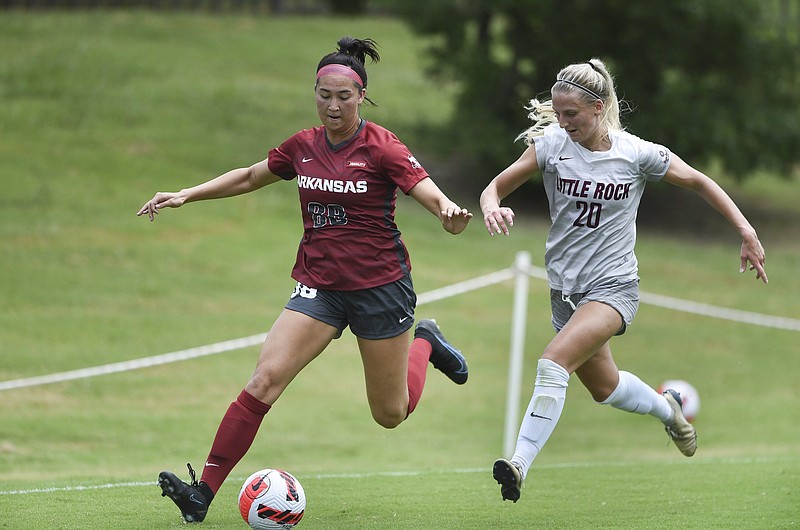 The No. 13 Razorbacks blanked Arkansas-Little Rock 5-0 over 105 minutes of a preseason scrimmage at Razorback Field, then serenaded him with "Happy Birthday" at midfield following the contest.

Senior Haley VanFossen scored two early goals to set the pace, and the Razorbacks dominated throughout, limiting UALR to just three shots in the first three 30-minute segments of the scrimmage and five overall. Coaches added another 15-minute segment at the end.

VanFossen, a three-time first-team All-SEC selection as a defender, scored less than 90 seconds in when she fired a shot from the left side just inside the box that settled into the opposite corner of the net.

She scored again less than a minute later as her high-arcing free kick from near midfield bounced off the goalkeeper's hands and into the goal. Freshman Van Fitch added a goal in the 22nd minute to give the Razorbacks a 3-0 lead.

VanFossen acknowledged the second goal was a surprise. But the team's effort was strong, especially since the Razorbacks haven't been together a week yet.

"I couldn't really see it," she said. "I knew I had really over-hit it. I thought it was just gonna go to her hands somehow but I don't know. I feel like we put together a pretty good three segments. It's always tough coming out here in the middle of the day.

"I feel like our new players really rose and we're at a good place right now, which is awesome being whatever how many days in."

Hale, who turned 45 on Sunday, came away mostly pleased with his team's effort despite having only five days of practice.

"I thought the first one [30-minute segment] was really good," Hale said. "I thought everyone played their role. We created some chances. We scored early. When the game started dipping, we brought some what we call game-changers in. I thought they brought the level back on.

"I thought the second segment was whatever you can say that's legal. It was not up to our standards. And we talked about it, and I thought we fixed it in the third and the fourth. There were some good performances."

Senior Taylor Malahm and junior Anna Podojil added goals in each of the final two 30-minute segments to set the final score.

Hale said the 1 p.m. start had a purpose since the Razorbacks' Aug. 19 match at Duke would also be in the afternoon. He wanted them to get a dose of the heat and have the experience of dealing with it.

"I thought we recovered well in the third," Hale said. "We got some stuff out of it. We did some good stuff. We've gotta get better at some stuff. We set objectives. The first one was about mentality, I thought we had a good one. The second one, we wanted to fix some stuff which we didn't. The third we wanted to tough through some stuff and we did.

"I thought the third and the fourth were pretty good. We haven't worked on some of the finer details, especially in the attack. Lots of growing."

The postgame celebration included ice cream, which Hale said might have given his team some incentive for the birthday celebration.

"I think they did it for themselves, to be honest," Hale joked.

Arkansas opens the season with a difficult two-match road test. The Razorbacks travel to No. 6 Duke to open the season, then take on No. 3 North Carolina three days later.