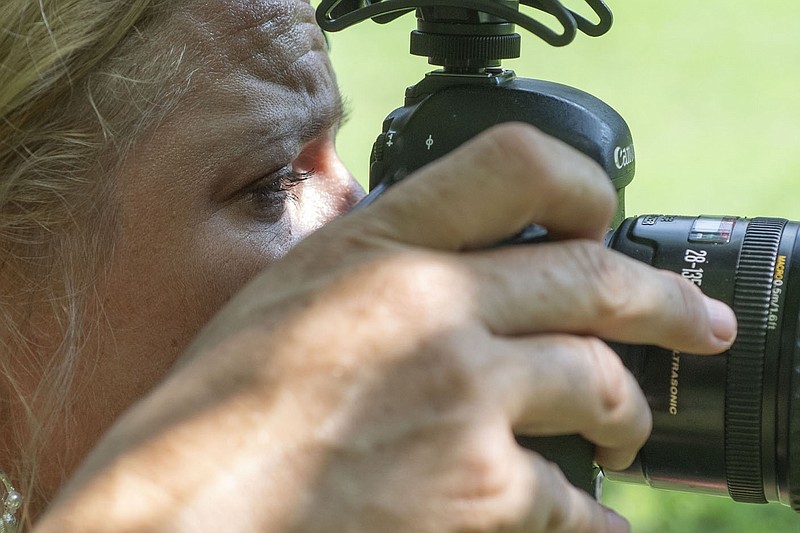 Diana Michelle of Fayetteville keeps her eyes on her camera while recording Paul Summerlin of Fayetteville as he performs some yoga poses Wednesday July 28, 2021 at Wilson Park in Fayetteville. (NWA Democrat-Gazette/J.T. Wampler)

A growing number of film festivals is bringing Northwest Arkansas to the attention of filmmakers and could bring more jobs supporting the state's creative economy, organizers say.

"What's so interesting about film is that it's not just an art, but it's commerce, it's economic development, it's tourism," said Kathryn Tucker, Arkansas Cinema Society executive director.

The society is a Little Rock-based nonprofit with the mission of building a film community in Arkansas. It seeks to connect film enthusiasts with one another and nurture the new and existing film talent within the state through increased exposure to filmmakers and their art. The creative economy includes arts and culture venues and activities that contribute to the overall economy.

"Having these festivals here is bringing more awareness to Arkansas and what's possible in Arkansas," said Brandon Chase Goldsmith, co-founder of the River Valley Film Society and executive director of the Fort Smith International Film Festival.

The festivals operate independently, Tucker said, but all contribute to the state's creative economy through featured events and by building awareness of the possibilities of filmmaking in Arkansas.

"It's not simply the festival itself, it's looking at all the veins that come out from the heart of our festival into the River Valley but also into Northwest Arkansas and to the whole state," Goldsmith said.

The festival champions nonfiction storytelling by providing a platform for storytellers to entertain, educate and broaden perspectives, according to the festival website.

Diana Michelle, 46, of West Fork is currently filming "It's No Secret" in Northwest Arkansas. She describes the film as a quasi-autobiographical docudrama about acute mental illness, profound healing and triumph over a lifetime of struggle. The film follows the life of Paul Summerlin, a local musician and yogi, she said.

Her film "Westland," about reclusive artist Tim West, was featured in the Hot Springs festival in 2014.

Participation in local festivals has helped draw attention to her career as a professional photographer and filmmaker, she said.

"There is more interest, there is more support and venues to show our work," Michelle said. "Things are getting better for the independent filmmaker. I want to embrace all of this."

The Hot Springs festival's impact on the city's economy is evident when the approximately 2,500 people who attend the event annually visit the city, Tucker said.

"Most of the hotels end up being pretty full during our festival. Restaurants are really, really busy," Gerber said. "We love that; we want that to happen. We love our town. We exist because of our town, so we want to be in that partnership with our city."

The Bentonville festival began in 2015 following the opening of Crystal Bridges Museum of American Art in 2011.

"It felt like the whole industry of the whole region in terms of the creative economy took off," Ashley Edwards, festival programming director, said of the era.

Some 30,000 people participated in the festival's in-person and virtual events in 2020, she said.

"With the exception of 2020, which found the world dealing with a health pandemic, Bentonville has hosted more and more events each year, which has been extremely beneficial to all of our venues and local businesses," said Kalene Griffith, Visit Bentonville president.

Goldsmith said he expects as many as 800 people may attend Fort Smith's first festival, which will feature more than 130 films celebrating the artistic expression and diverse experiences of Native Americans and people of color. Filmmakers from all over the world will come for the festival, he said.

"It's a way of kind of bringing the world into the River Valley, but at the same time, we're getting to showcase our regional talent to the world," Goldsmith said.

The festivals create opportunities for filmmakers visiting the state to discover the potential for filming in Arkansas, said Tucker.

The national film and television industry generates $253 billion, provides 2.5 million jobs and contributes an average of $250,000 annually to the local economies of areas featured as filming locations, according to "The American Motion Picture and Television Industry: Creating Jobs, Trading Around the World," a report published by the Motion Picture Association of America in April.

Arkansas' motion picture and television industry is directly responsible for more than $150 million in wages and about 3,300 jobs annually according to the report. Recent productions include films such as "Ghosts of the Ozarks," "Freedom's Path" and "12 Hour Shift."

Martin Lawrence, an actor who starred in films such as "Bad Boys" and "Blue Streak," and Melissa Roxburgh, an actress in "Star Trek Beyond," were filming the movie "Mindcage" in Springdale and Fayetteville last week, said a representative with United Talent Agency.

The cost benefits of filming a major motion picture in Arkansas may be attractive to filmmakers, Tucker said.

Georgia has a minimum spending expenditures of $500,000 for production filming tax breaks, Tucker said, bringing some $80 billion into the state's creative economy annually.

Marvel's "Black Panther" was filmed in Georgia and involved more than 3,100 local workers who took home over $26.5 million in wages, according to the Motion Picture Association of America report.

However, smaller films that get a lot of national attention are lower-budget Oscar contenders such as "Nomadland" and "Minari," which are well within Arkansas' ability to support, she said.

"We have an opportunity to kind of claim some of these lower-budget projects and still keep our local talent employed," Tucker said. "I think we could fill that void for the national market."

Part of that effort will be continuing to develop an experienced workforce in the state that's capable of meeting production demands, Edwards said.

"The amount of jobs that are available to work in crew and behind the screen is just exponential, as long as we can bring these film productions here," she said. "I just want people in Arkansas to be able to work in film and not have to move."

Both the Bentonville and Fort Smith festivals offer yearlong programming to invest in developing the local workforce, organizers said.

Fort Smith is working with local stakeholders such as the Fort Smith Regional Chamber of Commerce to develop educational programs at the high school level and a commercial contest for high school and college students to promote local businesses, Goldsmith said.

"We can create a pipeline from high school, to college, to careers," he said.

The Bentonville festival is likewise working with the University of Arkansas and Northwest Arkansas Community College to develop film production programs to further establish a path toward careers in filmmaking in the state, Edwards said.

Northwest Arkansas Community College offers a certificate of proficiency in cinematic studies, according to the college's website, with supporting courses that introduce students to the theoretical, historical and critical approaches to films.

"We have 10,000 alumni filmmakers that we're going to source," she said, of previous festival contributors and participants. "We're gonna make movies here." 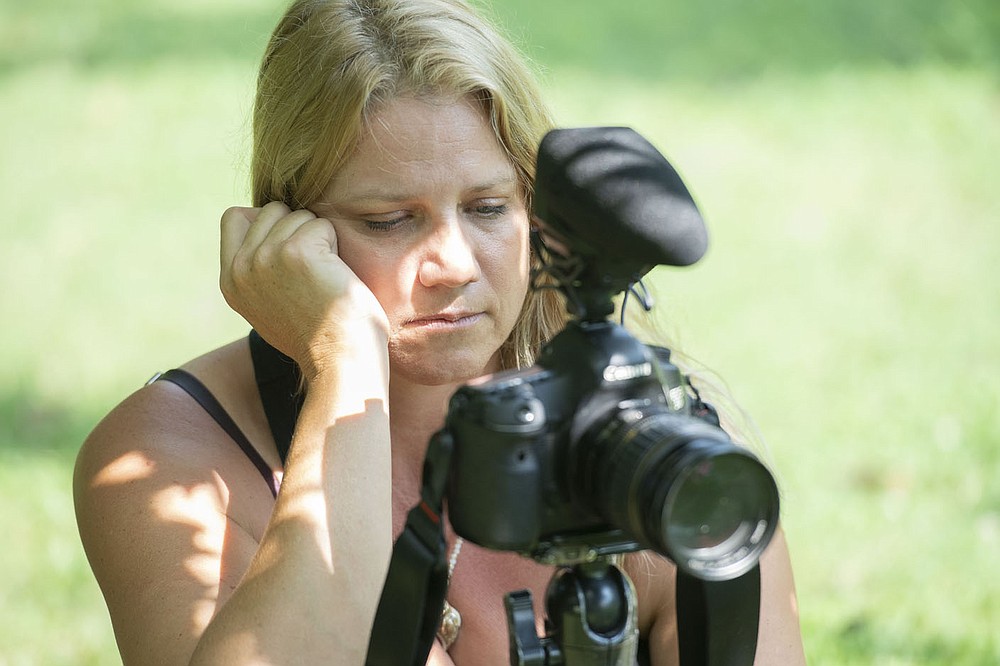 Diana Michelle of Fayetteville keeps her eyes on her camera while recording Paul Summerlin of Fayetteville as he performs some yoga poses Wednesday July 28, 2021 at Wilson Park in Fayetteville. (NWA Democrat-Gazette/J.T. Wampler) 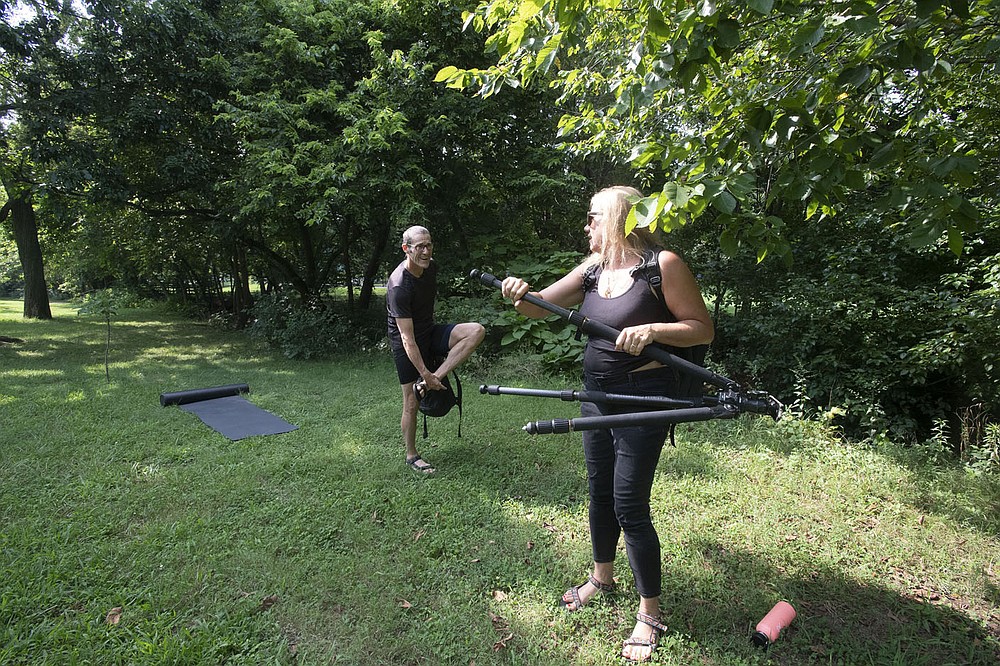 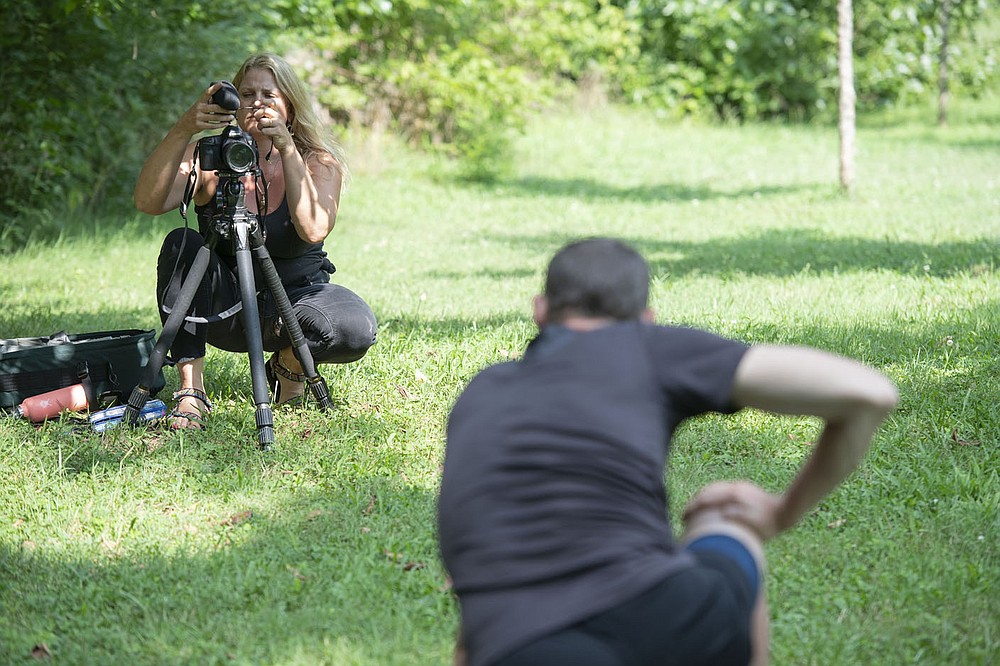 Diana Michelle of Fayetteville sets up her camera to record Paul Summerlin of Fayetteville while he performs some yoga poses Wednesday July 28, 2021 at Wilson Park in Fayetteville. (NWA Democrat-Gazette/J.T. Wampler)
More News

• Bentonville Film Festival tickets and passes are available at https://bentonvillefilm.org/tickets-passes/.