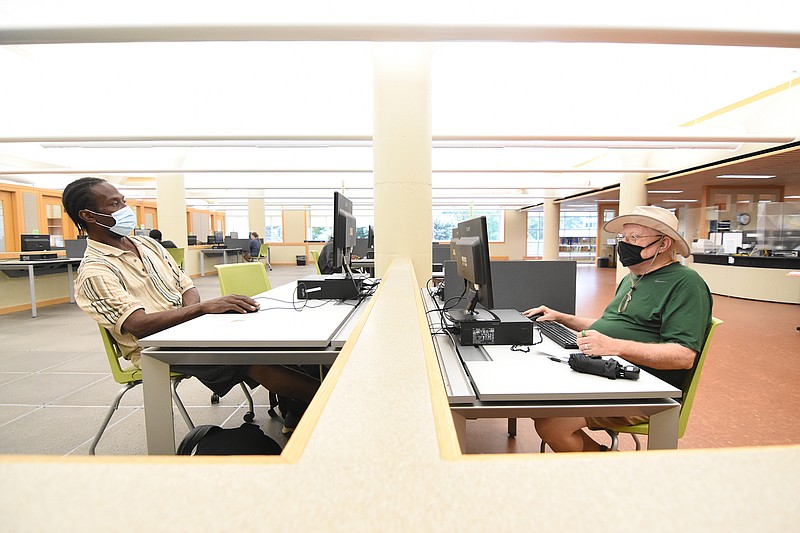 Nate Coulter, the executive director of the Central Arkansas Library System, in an interview Friday described the library's Nov. 9 millage-increase referendum in Little Rock as an attempt to solve a budgetary squeeze and prevent cuts to library services.

"Do we not have hours?" Coulter asked. "Do we not have as many staff helping with after-school programs? Do we have to cut back on some of the programs at the 'Rock It! Lab' or the tutoring programs?"

Officials want to avoid making those decisions as well as others, he said.

The special election for the library has joined the calendar of upcoming tax elections after the Little Rock Board of Directors on Tuesday approved an ordinance calling the referendum at the library system's request.

The library system is asking Little Rock voters to approve an increase of 0.5 mill to the city's current operations and maintenance millage rate, which draws on property taxes. The increase would take the rate from 3.3 to 3.8 mills.

A millage rate represents the tax collected on every $1,000 of the tax-assessed value of a piece of property. Millages are often used as a local revenue-generating device to support public entities such as libraries and school districts.

In the interview at the Main Library alongside the system's director of finance, Jo Spencer, Coulter said officials estimate that the millage increase will generate $2.3-2.4 million in additional revenue annually.

He has posited that the increase will cause property taxes to increase by $14 on the average Little Rock home.

A budgetary pinch dating back several years has led the library system to ask Little Rock residents to pay more in property taxes.

A graph provided by Coulter showed the inflation-adjusted combined expenses of the library system creeping up steadily starting in 2008 until they eventually exceeded tax collections around 2012-13.

Nevertheless, the trends had reversed themselves last year, with expenses exceeding tax collections once again.

Coulter said the library attempted to temporarily solve the problem associated with the system's budget by using bond proceeds -- or borrowed money -- to supplement the operational budget for materials.

Last year was the first year in recent times when capital-improvement bond revenue was not used to supplement the material-acquisitions budget because the borrowed money was depleted, he said, as well as because of an unexpected uptick in revenue.

The last increase in operating revenue in Little Rock occurred because of a 2007 millage election. But since then, the system has added new branches and facilities, Coulter said.

Departments were asked to make cuts. And since Coulter became executive director in 2016, the employee head count has been reduced from about 306 to 280 today, he said.

Despite their best efforts, he said that "we still have this structural problem."

Referring to the recent trajectory of the lines representing tax collections and expenses, "if you look at it, it's going in the wrong direction ... they're separating. You can't sustain that," Coulter said.

Circulation of digital items such as audiobooks and ebooks has also weighed on the library's roughly $2 million materials budget. The arrangement for the library paying for digital items is more expensive than lending a physical copy of a book until the copy falls apart, according to Coulter.

The millage increase will allow the system to avoid eliminating "some of the things that we think the community values and that we think are important to continue to provide and expand, if we can -- if we get this additional revenue," he said.

Coulter said he was particularly proud of efforts by the library system's staff to serve patrons during the covid-19 pandemic, including no-contact curbside service at the library.

Though the library closed in March 2020 at the onset of the pandemic, by September 2020, the system's doors were essentially open full-time again, though in-person activities remained suspended for safety reasons, Coulter said. Physical circulation was over 1 million last year, he said.

Coulter said that "our point to the community was, 'We're still here, even in this crunch, and you depend on us.'"

Many other libraries remained closed for an extended period of time during the pandemic and did not reopen until sometime after the vaccine was available, he said.

Asked about the decision to pursue an increase of Little Rock's 3.3-mill rate versus an increase in one of the library system's other jurisdictions, Coulter said most of the library's assets are in Little Rock and the bulk of the population within the system's service area resides in the city.

Additionally, he suggested the property-tax base was not big enough in other jurisdictions to generate much revenue.

Coulter said that "it seems more equitable in some way because the assets are here."

He said a campaign committee that has existed on-and-off throughout the years called the Coalition for Neighborhood Libraries is expected to raise money, spend the contributions on advocacy work and report expenditures.

A larger group of people made up of friends of the library are also expected to make voters aware of the Nov. 9 election and encourage them to support the system, he said.

Coulter said that "unlike a lot of candidate campaigns, it won't be a lot of fundraising and there won't be any television and all that sort of stuff."

Little Rock voters are set to go to the polls on Sept. 14, ahead of the library system's millage election, in order to authorize a 1 percentage-point sales-tax increase championed by Mayor Frank Scott Jr.

Likewise, the Little Rock School District is looking at a possible Nov. 2 election on whether to extend the levy of 12.4 mills for debt service for 19 years as opposed to having the levy end in 2033.

When asked about the danger of tax fatigue with the library's referendum coming on the heels of one, or maybe two, separate tax elections, Coulter said the library had wanted to have the election last November during the general election.

He said he was optimistic even though the timing was "not optimal."

Coulter said officials will be stringent about library employees not advocating a "yes" vote for the millage increase at work, though he said they could explain fact-based elements of the election to patrons.