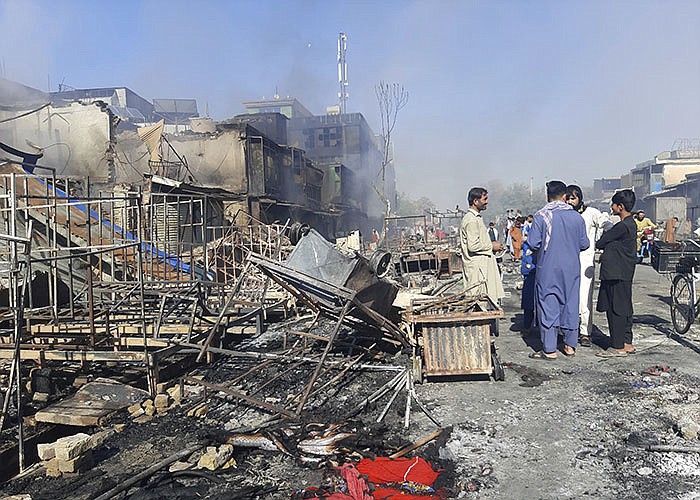 WASHINGTON -- Despite the advance of Taliban forces in Afghanistan, President Joe Biden and his advisers are not changing plans to complete the U.S. military withdrawal from the country by month's end, a senior administration official said.

The Taliban seized a major strategic and propaganda prize early Sunday, capturing the crucial northern commercial hub of Kunduz and then breaking through in two other regional capitals later the same day.

Biden had been briefed on the developments Sunday, according to a White House official, and aides were in contact with the U.S. Embassy in Kabul. Senior Pentagon officials were also reported to have been on phone calls about the Taliban's advances.

Despite that, the senior administration official, who was not authorized to speak publicly about the details, said Biden was not changing course on the troop pullout.

Ryan Crocker, who served as ambassador to Afghanistan during the Obama administration, predicted Afghanistan is likely to slide into a prolonged civil war after the U.S. withdrawal.

Crocker added that he didn't foresee any chance that U.S. troops would return.

"President Biden has made that clear -- we're going out and staying out," Crocker said on ABC's "This Week" on Sunday. Biden's decisions mean he "is now taking complete ownership" of former President Donald Trump's policies for Afghanistan, Crocker said.

Over the course of the past week, Taliban fighters have swiftly moved to retake cities around Afghanistan, assassinating government officials and killing civilians in the process. The Taliban have taken over customs posts at Afghan border crossings, seizing much of the government's revenue. It now controls half of the country's 419 districts, and the militants are putting pressure on the provincial capitals.

But administration officials have publicly continued to hold out hope that Afghan forces have the resources and ability to fight back, while at the same time negotiating a peace deal with the Taliban that seems more unlikely by the hour.

When asked about the Taliban's advances Friday, Jen Psaki, the White House press secretary, told reporters that Biden had long been prepared to make "difficult choices" as part of his commitment to disengaging from Afghanistan.

"The president made clear: After 20 years at war, it's time for American troops to come home," Psaki said. "He also feels and has stated that the Afghan government and the Afghan National Defense Forces have the training, equipment and numbers to prevail, and now is the moment for the leadership and the will in the face of the Taliban's aggression and violence."

On Saturday, U.S. Central Command said that American military aircraft have been hitting ground targets in Afghanistan in an effort to protect allies amid the advances.

On Sunday, the senior administration official said that the White House strategy remained unchanged. The Defense Department was on standby to provide resources if needed, the official added, but the prevailing strategy was to continue as planned and leave it to Afghan officials to defend their nation.

The rapid fall of Afghan cities on Sunday -- including Kunduz, Sar-i-Pul and Taleqan, all northern capitals -- comes just weeks before U.S. forces were set to complete a total withdrawal from Afghanistan.

After sweeping through the country's rural areas, the insurgents' military campaign has shifted to brutal urban combat in recent weeks. They have pushed into the edges of major cities like Kandahar and Lashkar Gah in the south and Herat in the west.

The strategy has exhausted the Afghan government's forces and overwhelmed the local militia forces that the government has used to supplement its own troops, a move reminiscent of the chaotic and ethnically divided civil war of the 1990s.

Kunduz, the capital of a province of the same name, is a significant military and political prize. With a population of 374,000, it is a vital commercial city near the border with Tajikistan, and a hub for trade and road traffic.

The militiamen planted their flag in the main square of Kunduz city, where it was seen flying atop a traffic police booth, a video obtained by the Associated Press showed.

Two provincial council members said the Taliban took control of the governor's office and police headquarters after a day of firefights, as well as the main prison building, where 500 inmates including Taliban fighters were freed.

A provincial council member from Kunduz, Mohammad Yusouf Ayubi, said Afghan forces only control the airport and main army barracks, and that the Taliban control the rest of the city.

"The innocent and poor must pay the cost of the war in Kunduz and other parts of the country, both government forces and the Taliban are the enemy of civilians," said Ayubi. "One can't provide security and the other doesn't care about people's safety," he added.

"All security forces fled to the airport, and the situation is critical," said Sayed Jawad Hussaini, the deputy police chief of a district in Kunduz city.

Clashes between government forces and Taliban fighters were continuing in a small town south of the city, where the local army headquarters and the airport are situated, security officials said.

"We are so tired, and the security forces are so tired," Hussaini said. "At the same time we hadn't received reinforcements and aircraft did not target the Taliban on time."

Security forces, who had retreated to the town earlier in the morning, began an operation to flush Taliban fighters out of the city Sunday evening, according to security officials.

The Afghan government in Kabul denies it has lost the northern city, which would be the fourth provincial capital to be largely overrun by Taliban fighters in the past week.

In the two preceding days, the Taliban had taken two other provincial capitals: Sheberghan, the capital of Jowzjan province in the north, and Zaranj, the capital of Nimruz province on the Afghanistan-Iran border.

The Taliban briefly seized Kunduz in 2015 and again in 2016, gaining control of a province for the first time since U.S. forces invaded in 2001. Both times, Afghan forces pushed back the insurgents with help from U.S. airstrikes. Kunduz is also where a U.S. gunship mistakenly attacked a Doctors Without Borders hospital in 2015, killing 42 people.

Also Sunday, the Taliban forces overran Taleqan, the capital of Takhar province which lies next to Kunduz, two Afghan lawmakers said. Taleqan, a city of some 200,000, has particular significance for the anti-Taliban northern alliance fighters who joined the U.S.-led coalition to oust the religious militia in 2001.

Sayed Sharafuddin Aini, a member of the Afghan parliament from from Takhar province, said the Taliban managed to take the city in the afternoon after three months of advances during which it took control of all of the province's countryside.

Another parliament member from the area, Nazifa Yousefi Beg, said that all provincial officials including the governor, police chief, and council members were on the run. She said she worried about their safety and wanted the government to send reinforcements to the city.

Both lawmakers spoke by telephone in Kabul, where they live. They said they had been in touch with officials and provincial council members in the morning and early afternoon, and Beg was appealing directly to the acting defense minister at his office.

Taleqan had been under siege in recent weeks and largely cut off from the rest of the country by Taliban forces that had taken control of the surrounding countryside over the past three months.

Earlier last week their fighters captured the ninth of 10 police districts of Lashkar Gah, the capital of southern Helmand province. Heavy fighting there continues, as do U.S. and Afghan government airstrikes, one of which damaged a health clinic and high school.

The Defense Ministry confirmed airstrikes occurred but said they targeted Taliban positions, killing 54 fighters and wounding 23 others. It made no mention of a clinic or school being bombed in its statement. Deputy provincial council chairman Majid Akhund said the facilities had been under Taliban control when they were struck.

As they rolled through provincial capitals, the Taliban issued an English language statement on Sunday saying that residents, government employees, and security officials had nothing to fear from them.

"No former civil servant and other government employee including those who worked in the security sector ... should have any fear of the Mujahideen of the Islamic Emirate, nor flee towards other places," said the statement.

Revenge attacks and repressive treatment of women have been reported, however, in areas now under Taliban control.