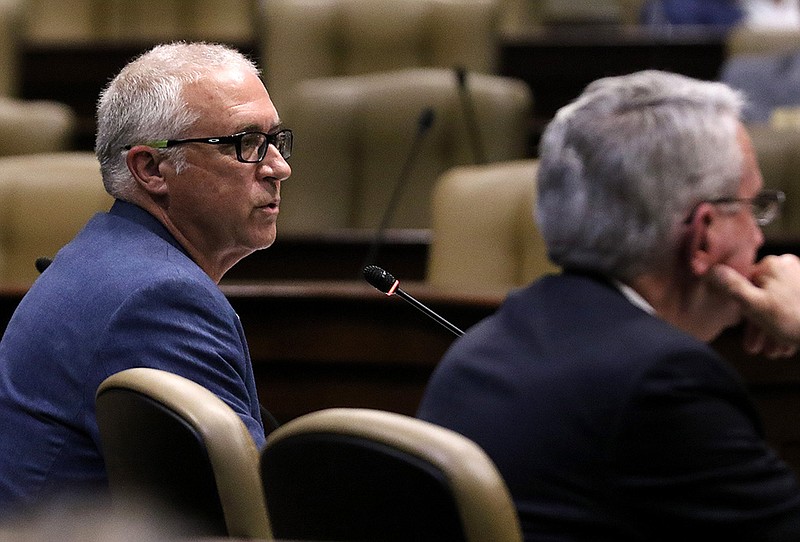 Tom Brower, senior vice president of health and safety for Tyson Foods, answers questions during a meeting of the joint House and Senate Committee on Insurance and Commerce on Tuesday, Aug. 10, 2021, at the state Capitol in Little Rock. (Arkansas Democrat-Gazette/Thomas Metthe)

Fresh from rejecting a proposal to allow schools to require masks for young students, some Arkansas lawmakers are now targeting businesses that require employees to be vaccinated against covid-19.

During a committee meeting Tuesday, legislators approved the study of a bill that would prohibit employers from requiring the disclosure of an employee's vaccination status.

The action was taken despite the president of the Arkansas State Chamber of Commerce and a Tyson Foods executive expressing support for the ability of employers to require vaccinations against covid-19 during the pandemic and the surge of a more transmissible variant.

The legislation, Senate Bill 719 by Sen. Bob Ballinger, R-Ozark, would create a state-recognized right to privacy for vaccination status, the lawmaker said. It was filed Thursday; lawmakers are currently in recess and plan to reconvene in the fall to work on redistricting.

Legislators met in a special session called by Gov. Asa Hutchinson last week to address mask mandates for public schools attended by children under 12, who cannot be vaccinated under guidelines from the U.S. Centers for Disease Control and Prevention. The General Assembly refused to pass legislation on that issue but House Committee on Insurance and Commerce Chairman Mark Lowery, R-Maumelle, said many lawmakers wanted to extend the special session to take up the issue of employer-mandated vaccinations.

The House and Senate Committees on Insurance and Commerce met jointly with the Senate Committee on Judiciary to discuss the topic Tuesday afternoon and heard about six hours of testimony from business leaders, attorneys and doctors.

They also heard from members of the public opposed to any kind of vaccination mandate, government or business.

On Aug. 3, Tyson Foods announced that it would require all employees in the United States to be fully vaccinated against covid-19 by Oct. 1.

The company has about 24,000 employees in Arkansas, and about half of the company's U.S. workforce is vaccinated, according to Tom Brower, senior vice president for health and safety for the company.

He said that more than 5,000 Tyson employees had been fully vaccinated or received their first dose since the company's announcement that it would require vaccinations.

Randy Zook, president and CEO of the Arkansas State Chamber of Commerce, acknowledged that mandating immunizations is a difficult issue, but requiring that workers be vaccinated is an employer's right. The chamber represents about 1,200 businesses.

He said Arkansas is an employment-at-will state, and asked that lawmakers not jeopardize that.

"This bill goes against all the advice of every trusted medical expert of both the state and the federal government," Zook said in reference to Ballinger's bill.

He said the legislation would require private businesses to violate CDC guidance, because there are different health precautions for vaccinated people than for the unvaccinated.

"The inability to mandate vaccines or require a vaccine status carries significant legal risk for employers," Zook said, adding that employers would be put at risk for negligence if employees or customers became infected.

Employers also would become subject to liability for offering incentives for getting vaccinated, he said.

Ballinger said later in the meeting that the bill is focused on individual rights.

"This is not about a mandate on an employer to prohibit the mandate on employees. What this is about is protecting the rights of the individual," he said.

During the regular session in the spring, lawmakers passed Act 1030, which prohibits state and local entities from requiring "vaccine passports," and bars the use of the documentation as a condition for entry, travel, education or services.

At Tuesday's meeting, lawmakers expressed skepticism about the effectiveness and safety of vaccinations as well as the process by which the vaccines were developed.

Dr. Jennifer Dillaha, the state's chief epidemiologist, said the three vaccines available to Arkansans were authorized by the U.S. Food and Drug Administration after they had completed safety and efficacy trials. Experts say serious side effects from the vaccines are extremely rare.

Dillaha added that the mRNA technology in the vaccine has been in development for decades, and vaccines for other types of coronaviruses have been in the works for years.

"It's people that are essentially really being held hostage through coercion to either give up your paycheck, insurance, settlements or get the vaccine. What's your choice?" Tyson employee Mike Simmons said. "They have us in a real difficult position. There's people with valid concerns, medical, philosophical, religious, yet many of them and even through our own processes, they said they would allow religious and medical exemptions but in their own words the process would be rigorous."

Simmons, who said he has worked for Tyson for more than 14 years, said he was not anti-vaccination but said he was against people doing something against their own conscience.

Ballinger and other lawmakers encouraged members of the public to continue reaching out to them. Senate Judiciary Chairman Alan Clark, R-Lonsdale, said he had received many calls against vaccine mandates from people in the medical field, mostly nurses.

The vaccines are under emergency-use authorization from the FDA and could gain full approval in the coming weeks.

"This is coming down to a head and the people are what's going to be able to change this," Sen. Terry Rice, R-Waldron, said. 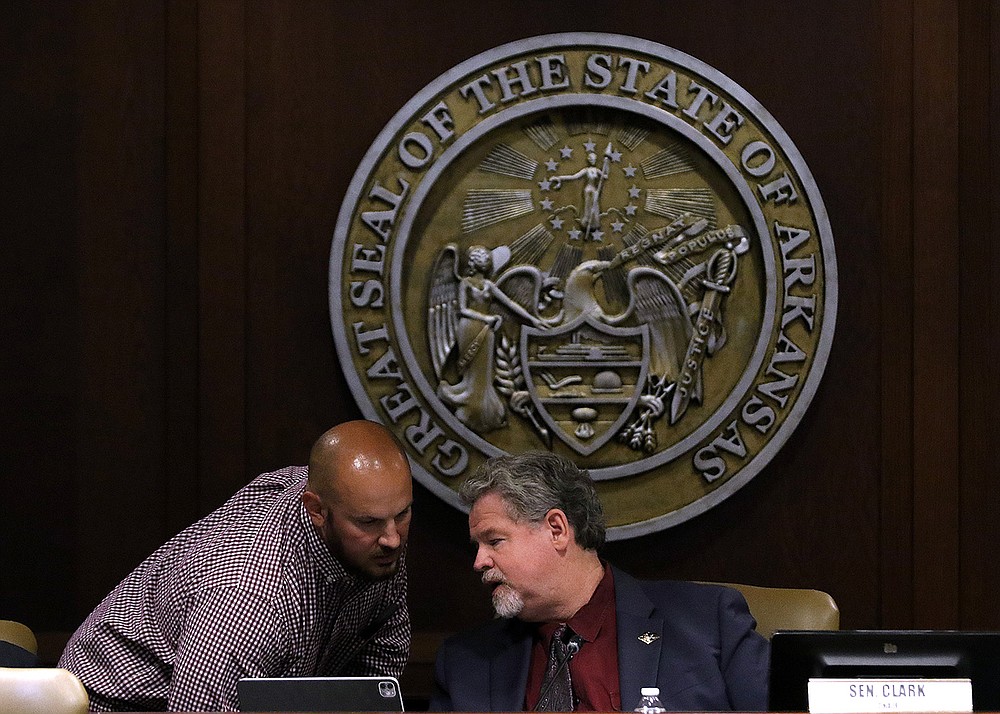 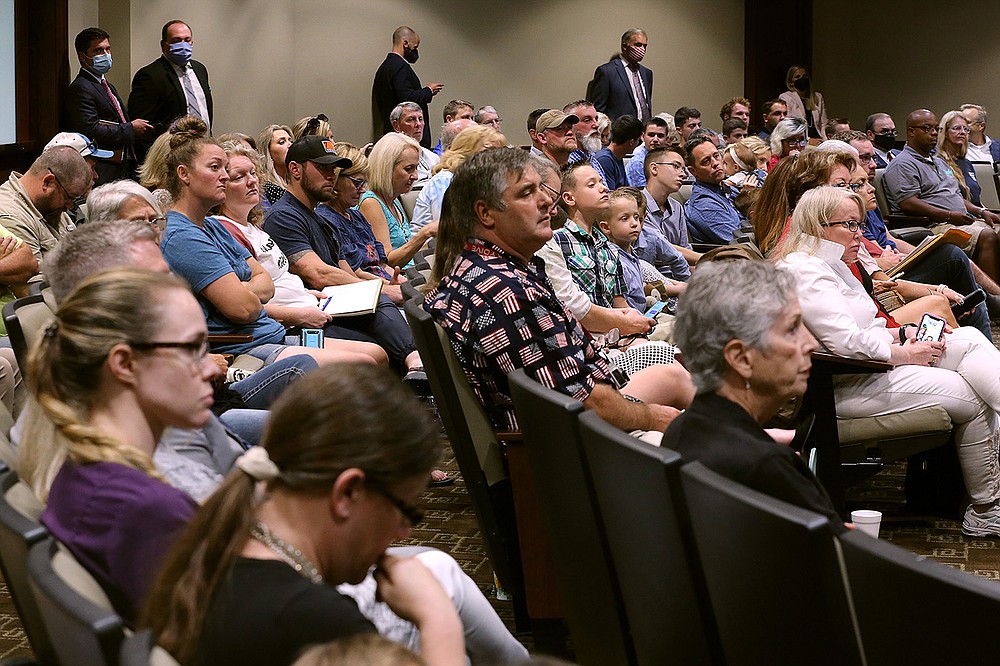 A large crowd of people watch during a meeting of the joint House and Senate Committee on Insurance and Commerce on Tuesday, Aug. 10, 2021, at the state Capitol in Little Rock. (Arkansas Democrat-Gazette/Thomas Metthe)