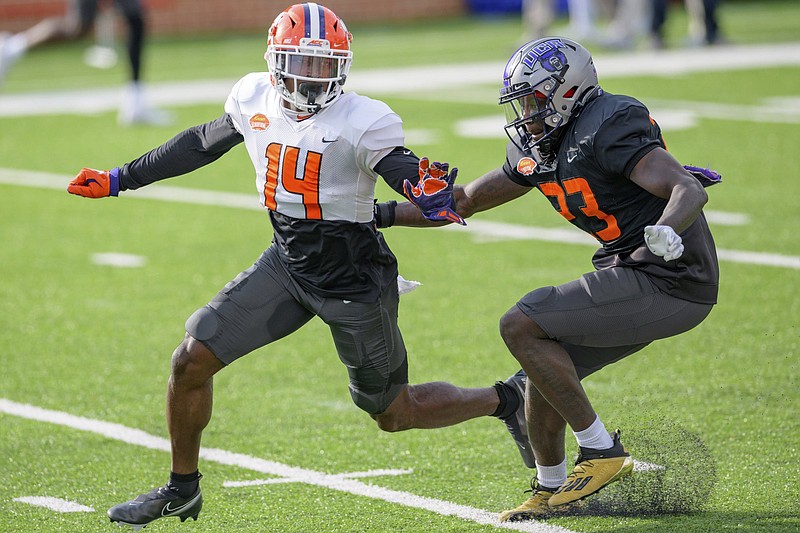 Less than a month out from his team's season opener, University of Central Arkansas Coach Nathan Brown isn't hesitant in his praise for this group of Bears.

"When you look [at the roster] from top to bottom, it's as talented a team as I've been around," Brown said Tuesday.

It's hard to fault him for the excitement.

STATS Perform's FCS preseason poll ranked UCA 14th in the nation. The Bears have a sixth-year quarterback in Breylin Smith, who's only emerged further as the team's clear leader this fall. And Smith has a pair of preseason All-American wideouts in Tyler Hudson and Lujuan Winningham.

None of those guys can replace Robert Rochell, though.

UCA's standout corner became the program's highest-drafted player earlier this year when he was selected in the fourth round by the Los Angeles Rams.

It was a momentous occasion for Brown and the Bears. Now, they have the task of replacing him.

With Matt Kitchens back in Conway after serving as former UCA Coach Steve Campbell's safeties coach at South Alabama, the Bears will transition to a 4-2-5 scheme as their base defense, typically putting five defensive backs on the field.

Two of those spots are spoken for: Cameron Godfrey, UCA's leading tackler and an All-Southland Conference honoree a year ago, will be the field safety, and Deandre Lamont will slide into the nickel spot.

Lamont, the Bears' pass-breakup leader in 2020, is someone Brown views as a versatile piece in defending against both the pass and the run. Brown compared Lamont to George Odum, who signed with the Colts as an undrafted free agent in 2018 after five seasons at UCA.

As far as the other three slots? There are plenty of names in the mix.

"What's fun right now is the corner battle is very heated," Brown said. "Where we have the most depth on our team is the defensive backfield and I don't think it's even close."

Wesley Anusiem is the lone true incumbent fighting for an outside spot -- he played in seven games a year ago after transferring from the California junior college ranks.

He'll battle with a trio of transfers in Willie Langham (Tulane), Kylan Stribling (Middle Tennessee State) and Nathan Paige (Austin Peay), all of whom have added "immediate credibility" to the defensive back room, according to Brown.

Things appear to be a little clearer with just one safety spot up for grabs.

Bryant native TaMuarion Wilson is the favorite to play alongside Godfrey. As a true freshman in 2020, Wilson capitalized on his opportunity as a result of injuries, playing all nine games and logging 31 tackles.

Nick Nakwaasah, a former three-star recruit now in his third season as a Bear, could also see time in the spot -- he intercepted now-San Francisco 49ers quarterback Trey Lance in UCA's matchup with North Dakota State last fall -- and is also capable of stepping into the nickel role in Lamont's stead.

At least for a while, Brown expects that it's going to be defensive-backfield-by-committee.

Given the void they're going to need to fill, though, the Bears will only benefit from a deep corps.

"You can't replace Robert Rochell. ... You don't get that every year," Brown said. "But I think we've got very, very, very good players in that room.