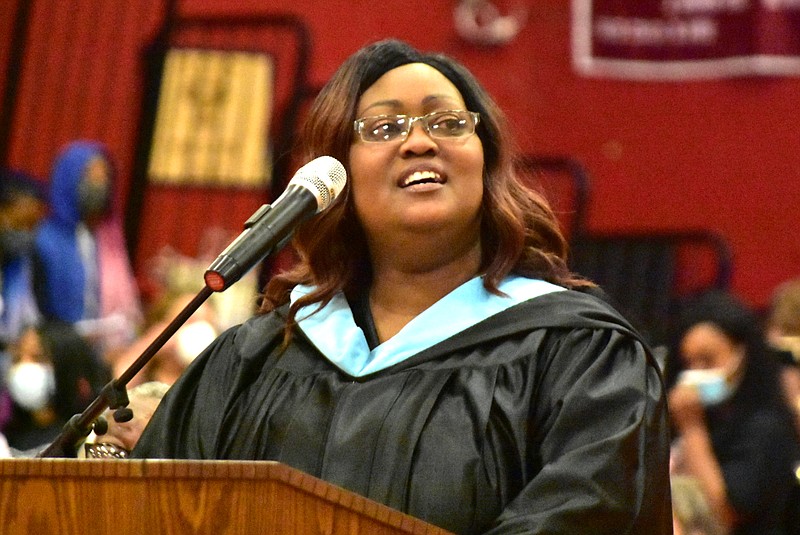 Pine Bluff School District Superintendent Barbara Warren says she is eager to get students and staff vaccinated against the covid pandemic. Shown here, she is speaking at the Dollarway High School graduation ceremony in May. (Pine Bluff Commercial/I.C. Murrell)

In an open letter Thursday, Pine Bluff School District Superintendent Barbara Warren announced that students, staff members and visitors must wear face coverings “at all times” on district property and buses, except while eating and drinking.

The mandate went into effect immediately, Warren specified. She added that the district would reevaluate the rule in 30 days “and make any necessary adjustments,” and she also solicited feedback from community members, asking them to complete a Ready For Learning survey at the district’s website: pinebluffschools.org.

“As you may know, on July 29, 2021, the Governor of Arkansas declared a state of emergency due to an increase in covid-19 cases,” Warren wrote in a letter addressed to parents, students, staff and community stakeholders of her district. “In an effort to protect our students and staff, we are implementing a mask mandate in our district, effective immediately. A mask or face covering must be worn over the nose and mouth at all times on district property and on buses, except for eating and drinking, by all students, staff and visitors. Visitors will be welcome; however, [they] should be prepared to adhere to procedures and protocols we have in place to include limiting the number of people in small enclosed offices and spaces, social distancing, and of course adhering to requirements to wear face coverings.”

Minutes before Warren’s letter was released, Southeast Arkansas College President Steven Bloomberg announced that his school’s board will hold an emergency meeting over Zoom at 9 a.m. Friday to vote on a measure that would require students and staff to wear masks.

The Pine Bluff district joins a growing list of Arkansas public school entities requiring the use of masks in light of an injunction against Act 1002 of 2021, which previously prevented state-supported universities, school districts and most other public entities from issuing such mandates. The act went into effect June 28, but Pulaski County Circuit Judge Timothy Fox blocked it last Friday amid a lawsuit from the Little Rock and Marion school districts challenging the act’s legitimacy. Two parents joined the school districts in the suit.

On Tuesday, the White Hall School Board approved a request from Superintendent Doug Dorris mandating masks. The day before, the Watson Chapel School Board voted in favor of a resolution authorizing Superintendent Andrew Curry to “set an expectation” for the wearing of masks. Curry said he would wait to see further covid-19 data before determining whether to enforce his "expectation."

Since the injunction of Act 1002, the University of Arkansas, Fayetteville and Arkansas State University in Jonesboro, among other higher-learning institutions in the state, have implemented their own mask mandates.