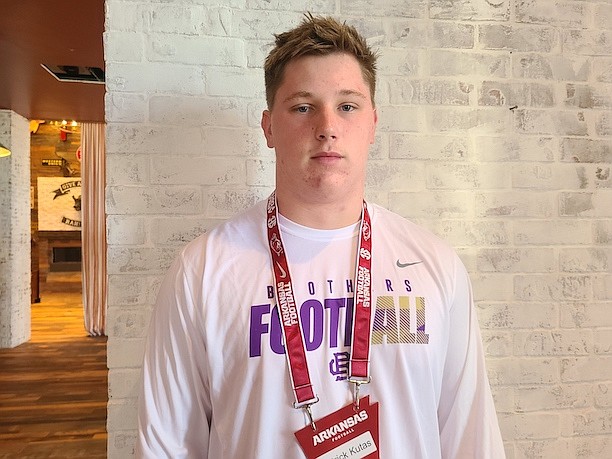 While many of Arkansas' 2022 commits are getting ready for their first scrimmage next week, one of the 17 already has two in the books and another one set for Friday.

Christian Brothers, 7-4 last season, will take on Arlington on Friday night and then open the season by hosting Germantown on Saturday, Aug. 21.

"I think it's been a learning experience because we have so many new guys, but I don't think that really means anything and I think we look pretty good right now," Kutas said. "It's kind of been just evaluating players and seeing who is the best fit where and trying to get the best players on the field.

"I think we can be a really special team this year."

Kutas is part of a Razorback recruiting class that is 18th nationally and sixth in the SEC according to 247 Sports' composite rankings.

That would not be surprising as Christian Brothers has made the state playoffs for 22 consecutive years.

The younger Hayden rushed for 2,010 yards and 24 touchdowns last season as a junior while being named Mr. Football in the state in an award presented by the NFL's Tennessee Titans.

Hayden chose the Buckeyes over Arkansas, Notre Dame, Tennessee, Illinois and others.

"Dallan is a special player and a pleasure to block for," Kutas said. "He's a very exciting guy that makes a lot of plays for us."

He got a solid look at Arkansas via a virtual tour on Feb. 20, an in-person visit for the Razorbacks' Red-White game on April 20 and his official visit on June 11-13.

"Choosing Arkansas, all the factors were right," Kutas said. "It's SEC football. Coach Pittman is a big offensive line guy and I just felt comfortable with everybody there. It just felt like the right place."

Arkansas and many other schools were recruiting Kutas as a defensive lineman at first, but he soon transitioned to being an offensive line prospect.

"I started off as a defensive lineman in high school, but obviously I grew a lot and I am still really athletic so that translates really good to an offensive lineman while still having the D-line skill," Kutas said.

Being just five hours away from Fayetteville, Kutas hopes to make plenty of Arkansas games this fall. He noted seeing an empty Reynolds Razorback Stadium for for the first-time was awe-inspiring and can't imagine what it will be like jammed with fans for games such as Arkansas-Texas one on Sept. 11.

"I want to get up there as much as I can and really get the feel for it," Kutas said. "I think Coach Pittman and his staff have everything going in the right direction and I am happy I am going to be a part of it."

"We knew when he was a sophomore that he was going to be special because he was very coachable, very tough," McDaniel told Memphis television station WTAN. "His work ethic is above everybody. There is nobody that works harder than Patrick Kutas."

Kutas, who had 55 tackles, nine for lost yardage and three sacks as a junior, is determined to enjoy his senior season with a stated main goal.

"I want to obviously win state, that's the biggest one, but really I want to have as much fun as I can," Kutas said. "It's my senior season so I want to put out and do the absolute best that I personally can."