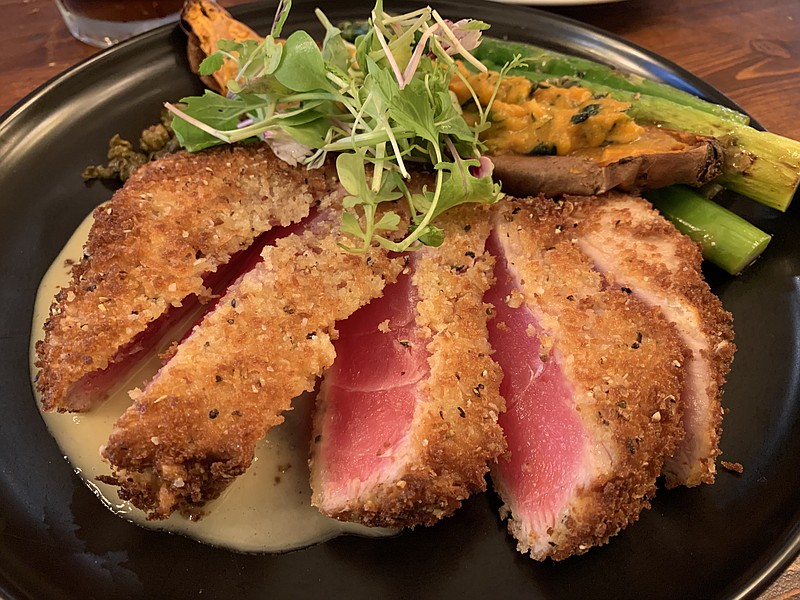 Our crusted ahi tuna steak at at Bennett’s by Keith & Co on Kiehl Avenue in Sherwood came with a with twice-baked sweet potato and asparagus. (Arkansas Democrat-Gazette/Eric E. Harrison)

Even folks like us who didn't get over there nearly often enough regret the loss of Zaffino's by Nori, a fine Italian restaurant on Kiehl Avenue, Sherwood's main east-west "drag." Zaffino's closed in June 2020.

But its successor, Bennett's by Keith & Co, a scion of an upscale Jacksonville sandwich shop, not only fills the space but fills a niche that the closure of Zaffino's left empty: No, the menu isn't Italian, but Bennett's offers pleasant fine dining and at almost shockingly reasonable prices.

It occupies the same two storefronts in a strip center that's easier to see if you're driving up (or down) Kiehl Avenue if you spot a prominent pedestrian bridge over the busy highway. Zaffino's layout was L-shaped and "vertical"; Bennett's is more square-ish, with a prominent open kitchen at the rear and hardwood-topped tables with thinly padded, vinyl-seat, hardwood ladder-back chairs. Along or near the walls (log ends distinguish a display wall just inside the entrance), they're lit by an eclectic assemblage of eclectic hanging bulb combos; in the middle of the room, the lighting is primarily indirect.

We mentioned the prices. Appetizers, which at $12, $13 and $14 look pricey on the menu, are actually priced and sized to share (see below). Entree prices, which range from $18 to $28, are well matched to portion sizes. Plate presentation is top-notch, too.

Our tomato bisque, the soup of the day ($4 cup, $6 bowl) was rich, tasty, thick, tangy, peppery — and tepid. It came with four croutons in a metal "thimble" cup, crisp and evidently house-made, but there were only four, so we had to apply them a lot more sparingly than we would have liked.

Tuna ($23), sushi-grade ahi tuna steak lightly breaded and "cooked to rare," in a fried- caper lemon sauce with twice-baked sweet potato (whipped with spinach and Gouda) and sauteed asparagus. The herbed crust was a little thick and might have slightly gotten in the way of the fish. Also partially blocking our way: a hefty pile of microgreens. Frying the capers added a flavor dimension to the lemon- caper sauce, a bed rather than a topping — it flowed underneath the sweet potato and asparagus, enhancing the latter, but as a result there wasn't quite enough of it under the tuna where we needed it. The sweet potato concoction was unique in our experience, the cheese giving it a rather exciting tang, but we would have probably enjoyed just plain whipped sweet potato with, say, some butter just as much.

The two round-ish items we saw on other tables were not, as they appeared from a distance, pre-meal Ding Dongs snack cakes, but pumpernickel rolls with herbed butter, a nice accent to the meal.

On our second visit, we opted for the Chicken Cacciatore ($18), a pounded-flat chicken breast in a light and lightly herb-spicy breading, tender enough to cut with a fork, topped with a rich, brown mushroom "gravy." (Put a pork cutlet in there and you could probably have called it a schnitzel.) It came topped with a huge parmesan crisp and, as with the tuna, too many microgreens. On the side: a goodly portion of tasty, lightly "onioned" green beans.

Bennett's Trio ($13) is listed among the "Starters," but there was enough guacamole, queso and salsa, served in three separate bowl-ettes, to make a meal in itself. It was certainly overwhelming for one diner — we would only suggest it if there's two or more to share. The guac was tangy and onion-y, but we only tasted avocado (or much of anything else besides onion and citrus) sporadically. The brick-red salsa blossomed more as a next-day leftover, chunky and lively with garlic. The Rotel-like yellow queso was decent but ordinary. We would have enjoyed all three more if our chips had been as fresh as the menu promised; they weren't yet in any way stale, but presuming they had been made fresh that morning, by dinner time they had gotten just a bit "stiff." 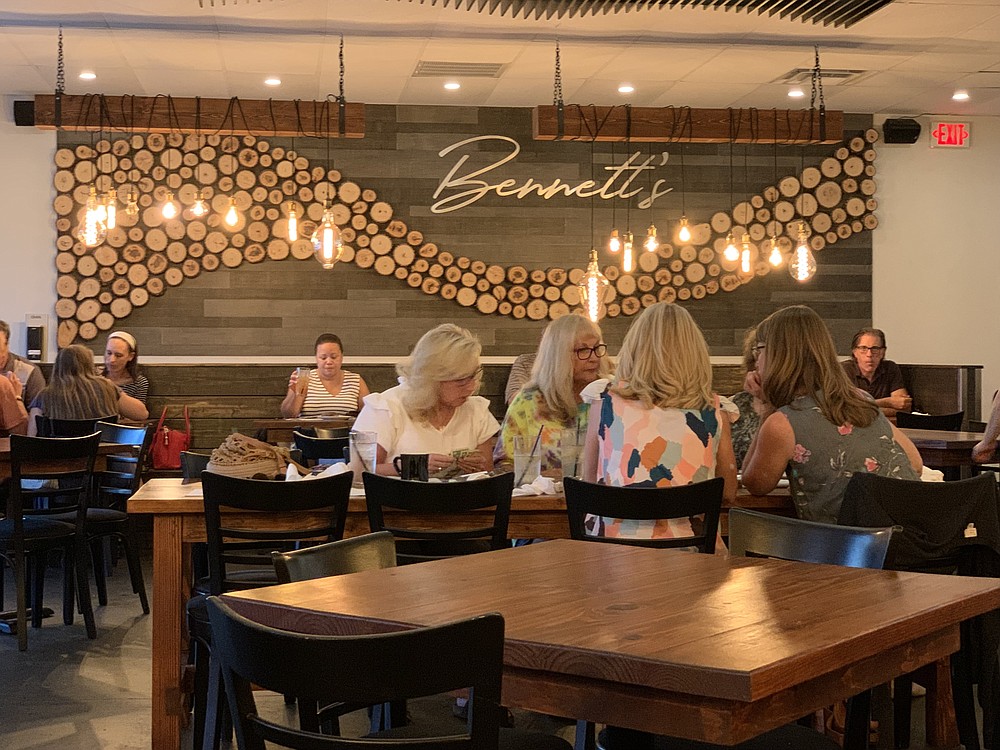 One day soon we'll try one of Bennett's burgers, on the menu for lunch and dinner, which looked tremendous on others' tables.

The lunch menu is rife with upscale sandwiches, including the grilled cheese ($10), which, though the menu didn't say so, also involved tomato and spinach, which we asked the kitchen to hold. The result was a huge and pleasant sandwich on multigrain bread; the cheese had melted enough to be soft but not runny, so the mouthfeel was a bit spongy. Accompanying was a small metal fry-basket of crisp, tasty, house-made chips.

For lunch, diners order at the front register and get a number; at dinner, it's full table service. On our first dinner visit the place was close to full and servers, each with four tables to cover, were kept on the run. On our second dinner visit, we had to ask the server for a setup and she never brought the bread, though we saw other servers taking it to other tables.

Oh, and we recommend you ask about specials. We didn't, our second-visit server didn't volunteer the information and we missed out on a scallop dish which, based on a photo we later spotted on Facebook, we strongly suspect we would have enjoyed.