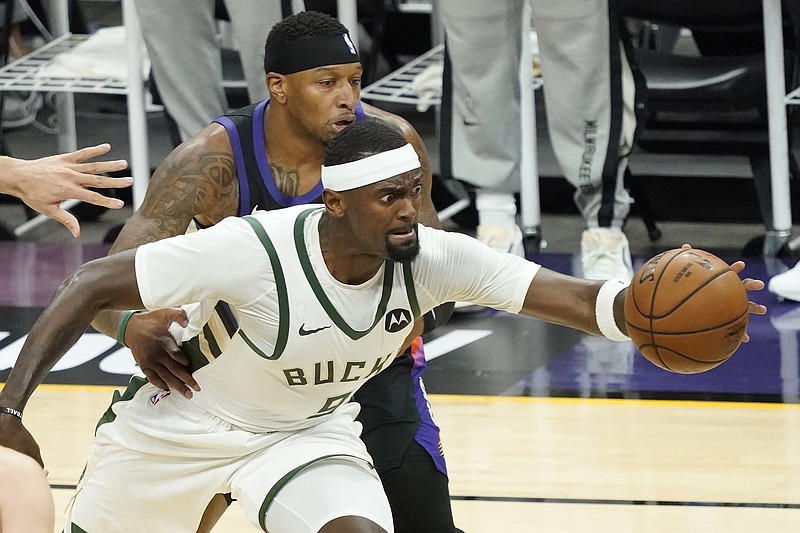 Milwaukee Bucks center Bobby Portis, a Little Rock native and former Arkansas Razorback, is taking time from his busy offseason for the Bobby Portis Foundation Weekend. The event, which returns after taking last year off because of covid-19, kicks off today with a basketball camp at Little Rock Hall. (AP/Matt York)

The summer of 2021 has been a bustling one for Bobby Portis.

The Little Rock native and former University of Arkansas standout helped lead the Milwaukee Bucks to an NBA title in June, found time to work out in Las Vegas when summer league play began and is about to ramp up his workload ahead of his seventh professional training camp that'll begin in September.

That busy schedule wasn't going to stop Portis from hosting an inspiring three-day event that's on the fast track to becoming a staple for the Central Arkansas area.

A basketball camp at Little Rock Hall STEAM Magnet High School today will kick off the Bobby Portis Foundation Weekend, and the sixth-year NBA veteran wasn't about to miss it.

The organization, which was created to aid single mothers throughout the community, held the first event in 2019 but was forced to cancel it a year ago because of health and safety concerns centered around covid-19. But this year, Portis, who earned All-American honors in high school at Hall and for the Razorbacks, was determined to bring the showcase back as a way to continue his benevolent ways of giving back – a trait that's seemingly comes just as naturally to him as breathing.

"My mom was a single mom, and she did the best she could to take care of me and my three little brothers," said Portis. "She had help along the way, and it's the job of my foundation is just to give a little help to the mothers around the city and do all the things we can to help inspire their kids. We want to help keep them motivated, help keep them off the streets.

"If you can help just one kid a year, two or three kids a year, then we feel like we're doing our job because at that point, we know we're out there doing the best we can."

Portis' best was definitely a boost to the Bucks last month when they finished off the Phoenix Suns in six games to win the NBA Finals and bring a championship to Milwaukee for the first time since 1971. The series victory also capped a whirlwind 16-month stretch for the 6-10, 250-pound forward.

After having his 2019-20 season with the New York Knicks end in March when the NBA suspended operations because of covid-19, Portis became a free agent when the team declined his $15.75 million option for the 2020-21 campaign. He would later ink with the Bucks in November, where he would grow to love a city that embraced him so much so that its fans constantly chanted his name during key stages of the NBA Finals.

"For me to be in a city that loves how I play, loves the effort that I give every night whether the shots are going in or not, that's big," said Portis, who averaged 11.4 points and 5.2 rebounds while shooting 47.1 percent from beyond the three-point line during the regular season. "To hear [fans] say, 'Bobby, Bobby', knowing where I come from, it's a surreal moment. Being in the league, you don't hear that too often, with guys getting their names cheered.

"You may hear a guy that's an MVP candidate get MVP chants at the free-throw line when they're having a big night or something. But for me, I'm a guy that comes off the bench. You don't really cherish it as much at first because you're so locked in to the assignment at hand on the floor, and you really can't enjoy the full dosage of it. I know my mom probably enjoyed it more during the games, but after I've sat down and thought about all the stuff I've been through and all the hard work I've put in, it really means a lot."

Portis' hometown means a lot to him as well, which is why he was adamant about getting his foundation's weekend extravaganza back on track.

Following the basketball camp at Hall, there will be a family bowling outing this evening at Professor Bowl from 8-11 p.m., followed by a community event at Big Rock Fun Park on Saturday from 11 a.m.-3 p.m. A formal gala is set to take place at the Governor's Mansion at 7 p.m. Saturday, while a free back-to-school backpack giveaway and autograph signing at the River Market Pavilion at Riverfront Park from 1-4 p.m. Sunday will cap the weekend. All proceeds from each activity will go toward the foundation.

"I have a platform to help others," said Portis, who recently signed a two-year deal to return to Milwaukee. "Little kids really need people to look up to and be inspired by, and I think I'm the perfect person for that. I try to do everything the right way, live the right way and work hard.

"I had guys that inspired me when I was young, and I want to try to do the same thing for others."