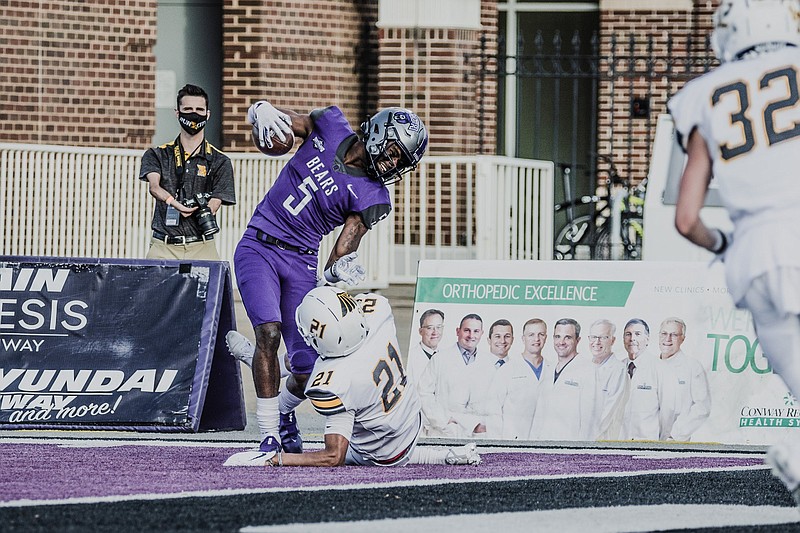 UCA wide receiver Lajuan Winningham said the outlook for a bigger year appears bright. “I think things, for us, will be a lot easier now that we’ll get a rhythm going,” Winningham said. (Photo courtesy University of Central Arkansas)

CONWAY -- University of Central Arkansas quarterback Breylin Smith joked with defensive back DeAndre Lamont about having his jersey on during a scorching hot day outside of the team's indoor practice facility on Thursday.

Three undoubtedly could have represented the climate gauge as temperatures neared triple digits, but the mood couldn't be any more lighthearted for UCA during its media day event. The heat didn't seem to faze the Bears, who had an additional reason to smile outside of having their individual and team pictures taken.

The Bears are 23 days away from opening their season at Arkansas State. Knowing that was enough to cause veterans and newcomers to grin throughout.

"It's about that time," said defensive back Cameron Godfrey. "We're very excited about it all, starting with getting a chance to play a normal type of season to being in a new conference. We normally do well as a program, and we all want to uphold that standard. Hopefully, it'll help us win a championship.

"But we're a confident group, as usual. So we're ready for the challenge that the season will bring us because we know it'll be tough."

Covid-19 challenges last season caused mass interruptions on every level of college football, from programs opting out altogether to teams, like UCA, having their schedules altered on a regular basis. The Bears still managed to finish 5-4 after winning three of their final four games.

According to wide receiver Lajuan Winningham, the outlook for a bigger year appears bright, at least for now.

There will still be some uncertainty to the year, particularly because the coronavirus is still prevalent. But there's a widespread belief that there will be some form of normality to 2021, and that's enhanced the eagerness during UCA's preseason practices thus far.

"Being back out here with the guys during a little bit more normal fall camp is great," Smith explained. "Just with covid versus last year, we're all super excited. We're excited about the leadership we have, we're excited about the players we have, the direction we're going in. ... It's rolling, and we're happy."

The enthusiasm is understandable for the Bears, considering the way they finished 2020 and the amount of talent they have returning, starting with Godfrey and Smith. But UCA, which is ranked No. 14 in the preseason Stats Perform FCS Preseason Top 25, is about to embark on a new era of sorts, and that's only added intrigue to what's expected to be a mysterious 2021 season.

After spending the past 15 years in the Southland Conference, the Bears are set to compete in the newly-revamped ASUN Conference. The move is not only expected to help give UCA a stronger presence, especially recruiting in areas such as Alabama, Kentucky and Florida, but also expand the Bears' overall visibility in those such markets outside of their region.

UCA, which was one of five teams to bolt from the Southland, got a small dose of the ASUN experience when it split a pair of games last season with fellow member Eastern Kentucky. The new league is also home to No. 10 Jacksonville State and No. 19 Kennesaw State among others.

"It'll be fun learning those new teams, and how they play and how they operate," said Winningham, who was one of 13 UCA players to be named to the All-ASUN preseason team. "I think the whole new progress of traveling to new places, everything with that sounds fine, and I'm here for it totally because I'm tired of going to Incarnate Word [in San Antonio].

UCA Coach Nathan Brown isn't concerned with long travel just yet. He's got other pressing matters to contend with before his team takes the field against ASU.

"One, we've got to take care of ourselves," he said. "We've got to get the horses to the race, especially some of our key players, and making sure we get good quality work in. We also have to pace those guys so we can get through a football season.

"I've got a lot of talented players on this team and a lot of position battles still going on, and they probably will go on for a couple of weeks. But I also want to see us keep coming together. I want to see who's going to develop as leaders, who's going to continue to push this team in the intangible ways, not just the football ways. Great teams are led by their peers, and that's what our challenge is each day."

Print Headline: UCA in rhythm for 2021