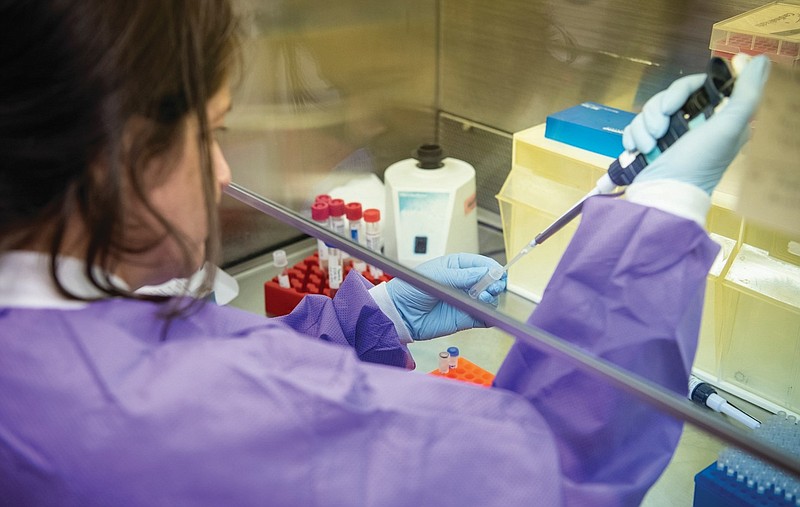 Dr. Jennifer Laudadio, director of molecular pathology at the University of Arkansas for Medical Sciences, conducts a coronavirus test in the UAMS labs using a screening sample during the early days of the coronavirus pandemic in this March 24, 2020, file photo. (Special to the Arkansas Democrat-Gazette)

The number of people hospitalized with covid-19 in Arkansas rose to a new high Friday for the fourth time in five days as the state's count of cases grew by 3,023.

The state's death toll from the virus, as tracked by the Department of Health, rose by 36, to 6,432.

"Our vaccination numbers are up by over 10% compared to last week," Gov. Asa Hutchinson said in a tweet.

"This is good progress, but we are still seeing record levels of hospitalizations. We have to do our part to stop this virus and reduce the workload on our health care workers."

To help handle the surge, which has been blamed on Arkansas' low vaccination rate and the highly transmissible delta variant, the veterans health care systems in Central and Northwest Arkansas announced Friday that they would be making a total of up to 10 beds in Little Rock and Fayetteville available to non-veteran patients.

"We're here for veterans, but we're also a very important part of the state and the state community, and it's very good for us to be able to offer help when we can," said Chris Durney, a spokesman for the Central Arkansas Veterans Healthcare System.

Health Department spokeswoman Danyelle McNeill said the beds are expected to cost about $2 million for 30 days, with FEMA paying the cost.

Arkansas will have the option to extend the agreement for an additional 30 days if needed, she said.

After falling a day earlier, the number of covid-19 patients hospitalized statewide grew Friday by 62, to 1,458.

That topped the previous record of 1,446 covid-19 patients hospitalized as of Wednesday and was 87 larger than the number's peak during the winter surge in January.

After rising to new highs Thursday, however, the number of covid-19 patients who were on ventilators fell by two, to 296, while the number in intensive care fell by eight, to 521.

Meanwhile, data from the U.S. Centers for Disease Control and Prevention showed that more than half of Arkansans as of Friday had received at least one vaccine dose -- meeting a goal set by Hutchinson but missing his target date by 11 days.

Hutchinson on May 4 said he wanted 50% of Arkansans to have at least one vaccine dose within 90 days, which would have been by Aug. 2.

At the time he set the goal, just 36% of Arkansans had had a vaccine dose, and Hutchinson acknowledged that the pace of vaccinations would have to increase.

As recently as early June, just over 40% of Arkansans had received at least one dose.

With the pace of vaccinations slowing, it appeared the state would not hit the 50% mark until sometime in October.

Then the state's cases and hospitalizations began surging, and more people started getting the shots.

So far in August, just over 100,000 more Arkansans started the vaccination process.

As of Friday 50.1% of the state's residents had received at least one dose, according to the data, up from 49.9% as of Thursday.

Compared with other states, Arkansas' vaccination rate remains low, although it recently moved up in the rankings.

On Friday, it continued to rank 40th among the states and District of Columbia in the percentage of its residents who had received at least one dose.

Its percentage of residents who had been fully vaccinated -- 38.2% as of Friday -- continued to be the country's sixth-lowest, ahead of only Idaho, Louisiana, Wyoming, Mississippi and Alabama.

Nationally, 59.4% of people had received at least one vaccine dose, and 50.5% were fully vaccinated.

In addition to requesting the beds at the veterans hospitals, Arkansas has struck agreements with Baptist Health and Unity Health to create an additional 200 beds for covid-19 patients for up to 60 days using money from the state's allocation of American Rescue Plan Act funds.

The remaining beds will continue opening in phases "based upon available staffing and could be open prior to Aug. 20," he said.

A spokeswoman for Unity Health-White County Medical Center said the hospital was working this week to hire nurses from outside Arkansas to staff the beds on its campus.

Durney said up to five beds in Little Rock and five in Fayetteville will be available to non-veterans, with or without covid-19, as long as the space and manpower to staff the beds is available.

Under a similar arrangement in place from December through March, the John L. McClellan Memorial Veterans Hospital in Little Rock admitted a total of 11 non-veteran patients, he said.

"If we can take care of them, we bring them in," Durney said.

As of Friday, the hospital had about 40 covid-19 patients who were veterans, and the Veterans Health Care System of the Ozarks in Fayetteville had 12.

At its 11 hospitals around the state, Baptist Health had 278 covid-19 patients Friday, up from 273 a day earlier.

The number of its patients who were in intensive care rose from 108 to 114.

"The majority of COVID-19 patients at Baptist Health remain under the age of 60, ranging in age from 20 to 93 years old," Riddle said in an email.

He said 89% of the hospitalized covid-19 patients, including 94% of those in intensive care, had not been vaccinated.

The University of Arkansas for Medical Sciences Medical Center in Little Rock had 64 covid-19 patients, down from 67 a day earlier, spokeswoman Leslie Taylor said.

The patients as of Friday included 20 who were in intensive care, 15 who were on ventilators and three who were on heart-lung bypass machines.

Ten of the 64 patients, all with compromised immune systems or other health conditions besides covid-19, had been fully vaccinated, Taylor said.

On its Facebook page, Baxter Regional Medical Center said it had 32 covid-19 patients, which it said was a "slight improvement" from earlier in the week.

Nine of the patients were in intensive care, and six were on ventilators, the hospital said. It said 90.6% of the 32 patients had not been vaccinated.

The hospital also said it had 36 employees who were out with active covid-19 infections.

The majority, he said, were asymptomatic.

"We are living in trying times of unprecedented proportions. Many of us have family, co-workers and friends who are battling sickness, some fighting for their lives at this very moment," Jones said in a news release. "And while every precaution has been taken within our facility through cleaning, sterilizing and isolating, the inevitable has now taken a foothold."

To "ensure the safety of the remaining inmates and employees," 86 inmates with nonviolent charges were released, Jones said.

"These individuals were released with a form advising them of quarantine protocols and were given masks as recommended by the CDC," Jones said.

"While none of us want inmates released before they have served their time, this was necessary to aid in halting the virus within the facility, as well as to assist the remaining correctional officers with a manageable population."

The reduction will also allow distance among inmates to be maintained, Jones said.

The inmate housing capacity for the jail is 172. During the past several months, the population has risen to 237, "straining the staff and resources even under normal conditions," Jones said.

"The remaining 133 inmates, some with positive results, are being closely monitored by the in-house medical team and have medical care available to them at all times," Jones said.

The statewide new case total was just the second one in a single day since January that topped 3,000, with the other being a spike of 3,037 cases the previous Friday.

Since the more recent increase was smaller, the average daily increase in the state's case count over a rolling seven-day period fell by two, to 2,271.

That was the second-straight drop in the average daily increase, which hit a nearly seven-month high of 2,351 the week ending last Saturday.

With new cases outpacing recoveries, however, the number of cases that were considered active rose by 742, to 25,175, the largest number since Jan. 16.

"I feel that we are still on a trend that shows a worsening situation," state Epidemiologist Jennifer Dillaha said.

She pointed to the state's hospitalizations, which, she said, "haven't really shown a slowdown yet."

"We did have a lot of discharges yesterday, but then we admitted more people than we discharged today, and I think that's likely a function of many people who needed to be in the hospital who couldn't get a bed," she said.

While the state's new case totals Thursday and Friday were lower than the ones a week earlier, she said the case numbers "are really kind of the tip of the iceberg."

"A lot of the people are now using over-the-counter tests," including many who likely don't report the results to the Health Department, she said.

In one indication of the level of transmission, she said 16.5% of the state's coronavirus tests were positive during the seven-day span ending Thursday, up slightly from the 16.2% that was initially reported for the week ending Wednesday.

"It's an indicator that there's a lot of positive people out there," Dillaha said.

According to rankings Friday from the CDC, Arkansas continued to have the country's fourth-highest number of new cases per capita over a rolling seven-day period, behind Louisiana, Mississippi and Florida.

In new deaths per capita, it moved from No. 3 to No. 2, second only to Louisiana.

Dillaha said five of the deaths reported Friday occurred in early June, and the rest happened within the past month.

The number of people who have ever been hospitalized with confirmed infections in the state rose by 155, to 19,781.

At 13,557, the increase in vaccine doses that providers reported having administered, including second doses of the Pfizer and Moderna vaccines, was larger by almost 1,400 than the one a week earlier.

The average number of doses administered each day over a rolling seven-day period rose to 10,618.

That was the third daily increase in the average in a row, although it remained below the three-month high of 12,950 it reached the week ending Monday.