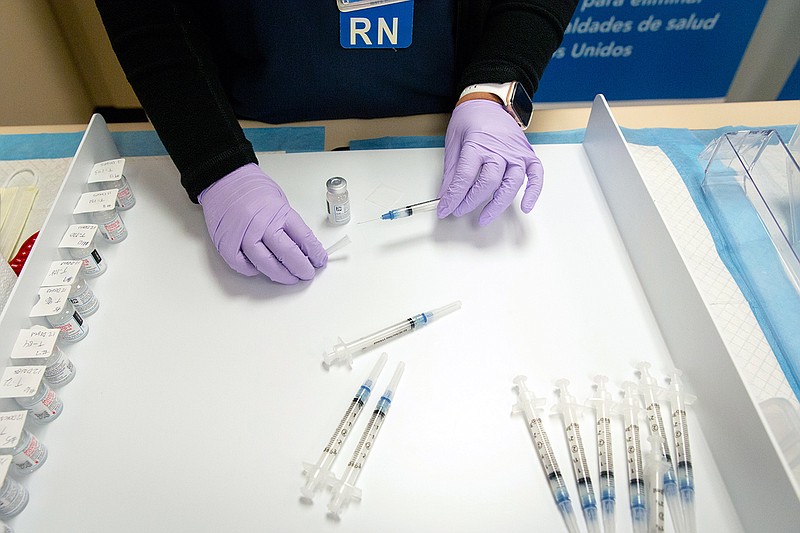 A nurse prepares doses of Moderna vaccine in April at a medical office in Los Angeles. Moderna and Pfizer are testing the timing and efficacy of booster doses, with Moderna developing a low-dose version of its current vaccine and another version customized for the South African strain. (The New York Times/Allison Zaucha)

Arkansas legislators met for hours this month during the latest surge of the coronavirus pandemic, discussing whether to lift their ban on mask mandates for schools or if they should block employers from requiring vaccinations.

Committee meetings featured hours of discussion, which sometimes included claims by lawmakers and witnesses that were unproven, misleading or factually untrue.

The Arkansas Democrat-Gazette consulted with experts and other medical sources to shed light on common myths and misconceptions about the coronavirus, masks, vaccines, treatments and effect on children.

Lawmakers met in a special session Aug. 4-6 that was called by Gov. Asa Hutchinson, who hoped they would allow public schools to require masks for children under 12. Children that age cannot be vaccinated under guidelines from the U.S. Centers for Disease Control and Prevention. The bills failed to get out of committee.

However, on the same day the session ended, Act 1002 of 2021, which prohibits most state and local entities from enacting mask mandates, was put on hold by a judge pending a trial.

Since the court ruling, dozens of school districts and some higher-education institutions have opted to implement mask requirements, according to a list maintained by the Arkansas Democrat-Gazette.

Three legislative committees met jointly Tuesday on the issue of employer-mandated vaccinations. Tyson Foods, one of the state's largest employers, announced Aug. 3 that it would require all U.S. employees to be fully vaccinated by Oct. 1, and a number of hospitals in the state have announced that they will require workers to be vaccinated.

Many opponents of mask and employer mandates expressed their fears of loss of freedom and the effects of the vaccines. Some offered thoughts on other ways to combat the virus.

What follows are common claims and what the experts say.

CLAIM: Only a certain type of mask works to stop the spread of the virus.

WHO SAID IT: "The only mask that has any efficacy is the N95 with a respirator," Sen. Gary Stubblefield, R-Branch, said Tuesday at a legislative committee meeting.

FACT CHECK: There are still benefits to fabric or paper masks, though they do serve a different purpose from N95 masks, Dr. Jennifer Dillaha, Arkansas' chief epidemiologist, said in an interview Friday.

"The purpose of wearing a mask primarily is to prevent the person wearing the mask from spreading the illness, and it's been clearly demonstrated in scientific studies that masks do a good job of doing that. The N95, of course, its primary purpose is to keep the wearer from getting sick," she said.

CLAIM: Putting schoolchildren under a mask mandate in 2020 prevented them from building up natural immunity that would have helped them fight covid-19.

WHO SAID IT: "Do you think that allowing students to develop a natural immunity is the safest thing we could do for them?" Rep. Mary Bentley, R-Perryville, asked at a legislative meeting Aug. 4. "It might be better if we hadn't masked the kids last year and they could have developed some immunity."

FACT CHECK: "I think that's not really a very well-informed perspective because if a person had covid-19 last year, they could potentially get it again this year," Dillaha said. "I think many people assume just because you have antibodies to something you have permanent immunity or lasting immunity to something and that's not necessarily the case."

Dillaha said she would urge people to get vaccinated even if they have had covid-19 before for that reason and because the long-term effects of the illness aren't yet fully understood.

"We know that people who have had it can have lasting damage to their lungs, their heart, their kidneys and their brains and there are reports of children having problems thinking and remembering things, as well as some changes in behavior," she said. "I just would not encourage people to assume that young children will have mild disease with no consequence, because we know some of those complications can occur even with people who have had mild disease."

WHO SAID IT: Bentley, as well as parents who spoke against school mask mandates referred to a June report about some parents who sent children's masks to a lab at the University of Florida for testing, which detected 11 pathogens on the masks including pneumonia, tuberculosis and E. coli.

FACT CHECK: Dillaha said that studies show that fabric and paper masks work, because they block the pathogens from being spread by the wearer to other people, though she added that it was important to provide children with clean masks or use masks that can be discarded or laundered.

Dr. Heather Young, a pediatric infectious-disease doctor at Arkansas Children's Hospital, testified to a legislative committee on Aug. 4 that no child in Arkansas had been hospitalized because they wore a mask.

"We have not seen any children being hospitalized as a consequence of wearing a mask but right now with this delta variant, we are seeing the rates of covid-positive children in our hospitals rising astronomically," she said.

CLAIM: We don't know the long-term effects of the vaccine.

WHO SAID IT: "We have no ideas about the long-term effects of this new mRNA vaccination. ... They are essentially mandating a vaccine that they have no idea what's going to happen four, five, 10 years down the road," Stubblefield said Tuesday.

FACT CHECK: This claim is unproven. When someone gets a vaccine, it goes into the muscle, which makes a spike protein that travels through the immune system, Dillaha said. The vaccine doesn't stay in the body -- it's gone within hours or a day and isn't making any additional protein beyond the initial amount, she said.

"In general we do not see new effects of a vaccine down the road, and so we don't see long-term side effects because the vaccine's not in the body," Dillaha said. "What we could see is effects from the vaccine that started within the first six weeks after the vaccine was given but they have continuous effects down the road. ... We don't see vaccines do something new months down the road that they didn't do when they were first given."

She said it was highly unlikely something unexpected would happen to vaccinated people 10 years from now.

CLAIM: The risk of the vaccines outweighs the risks of the disease for people who are not high risk.

WHO SAID IT: "There's a risk of an enlarged heart and possibly a lifelong condition and very little risk from the disease" for young and healthy people, Sen. Alan Clark, R-Lonsdale, said at Tuesday's legislative committee meeting.

FACT CHECK: Vaccines have not been associated with an enlarged heart, and "the risk of the vaccine is so much less than the risk of covid-19," Dillaha said.

There have been reports of myocarditis and pericarditis, the inflammation of the heart and its exterior lining, associated with the Pfizer and Moderna vaccines, she said. In Arkansas, there have been reports of myocarditis, usually among adolescents or young adults, and Dillaha said she was aware of one brief hospitalization during which a patient was monitored, did very well and was sent home.

But the virus can cause a far more severe version of that condition, she said.

"Covid-19 itself can cause really severe myocarditis that puts kids in the hospital and into the ICU and it can result in permanent damage," Dillaha said. "It's important to weigh those risks and benefits. The vaccines lower the risk of severe myocarditis by 1,000 times."

She added that people of any age with even mild covid-19 infections can have lasting complications from the virus, including cognitive dysfunction, heart problems, lung damage and kidney damage.

CLAIM: PCR tests are not accurate, so the CDC is phasing them out.

WHO SAID IT: A parent who spoke against school mask mandates on Aug. 5 questioned the number of cases in a school district if they were based on polymerase chain reaction, or PCR tests.

FACT CHECK: This claim is false. The PCR test is accurate for covid-19, Dillaha said. The CDC is working on a new version of the test that can detect both covid-19 and the flu and plans to replace those tests with ones that can detect both viruses. The reason for doing so is because it would be helpful to be able to test for the flu alongside covid-19 in the wintertime, not because the tests are inaccurate, Dillaha explained.

CLAIM: Ivermectin, for parasites, and hydroxychloroquine, for malaria, are effective treatments for covid-19.

WHO SAID IT: At legislative meetings earlier this month, Bentley and Stubblefield said the drugs could have been used for early intervention to save covid-19 patients in Arkansas and that physicians and Arkansans have seen great results with them.

FACT CHECK: These claims are unproven. Kimberly Haverstick, assistant director of pharmacy at the University of Arkansas for Medical Sciences, said there is not sufficient evidence to show that ivermectin benefits humans being treated for covid-19, and that health organizations now have enough information on hydroxychloroquine not to recommend it.

She said that there have been a number of studies over the past year trying to find out whether ivermectin benefits covid-19 patients, but the problem with many of them is the quality of data and concerns about the lack of peer review.

"A lot of the studies were really small in sample sizes," Haverstick said. "Also, a lot of them were more observational rather than being randomized and controlled. ... You can't really pinpoint in a study like that, was it the ivermectin or was it maybe something else that they were already also taking, were there other factors, was it in a patient who might have recovered anyway on their own without further treatment?"

She added that the studies were highly variable as to the dosage, dosage form, the time point in therapy when the treatment was administered and the severity of the patient's illness, so it wasn't possible to definitively link a patient's outcome to the drug.

Laboratory studies of ivermectin did show some slowing of viral replication, she said, but it's not clear whether that translates to clinical benefit in a patient.

The World Health Organization advised in March that ivermectin only be used within clinical trials, and the FDA advises against using it to treat covid-19.

John Vinson, CEO of the Arkansas Pharmacists Association, said Thursday that "it is far safer for a patient to talk to his or her doctor and health care team about covid-19 treatment and prevention than to take any medication in a way that is not intended."

Haverstick said early studies on hydroxychloroquine that took place around March and April of 2020 showed a possible benefit but problems with data quality are similar to the studies on ivermectin, and later studies showed the net effect was detrimental.

WHO SAID IT: In reference to suggesting ivermectin and hydroxychloroquine as covid-19 treatments, Bentley said Aug. 4 that "the FDA's not approved all of them but neither have they approved vaccinations."

FACT CHECK: The three covid-19 vaccines available in Arkansas are being administered under the FDA's emergency-use authority. Though it does not yet have full approval from the FDA, Haverstick said the emergency authorization means there have already been large studies done on the vaccines' safety and efficacy.

The steps between emergency-use authority and full approval include things like packaging, marketing materials and commercials, she said.

So the emergency-use authorization designation does not mean studies haven't been done, Haverstick said.

"There have, and in addition to the studies that were done before the authorization, we now have lots of data to look at and people who have received the vaccine, and that's different than with ivermectin; we have data for what it's used for as an anti-parasitic agent. That doesn't really translate well to treating covid," she said. 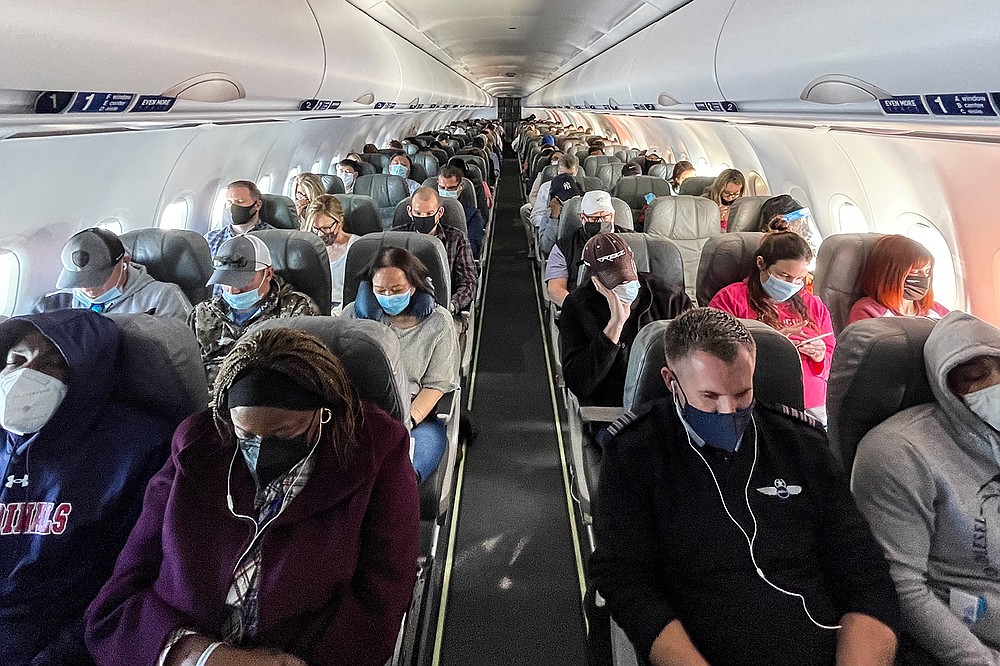 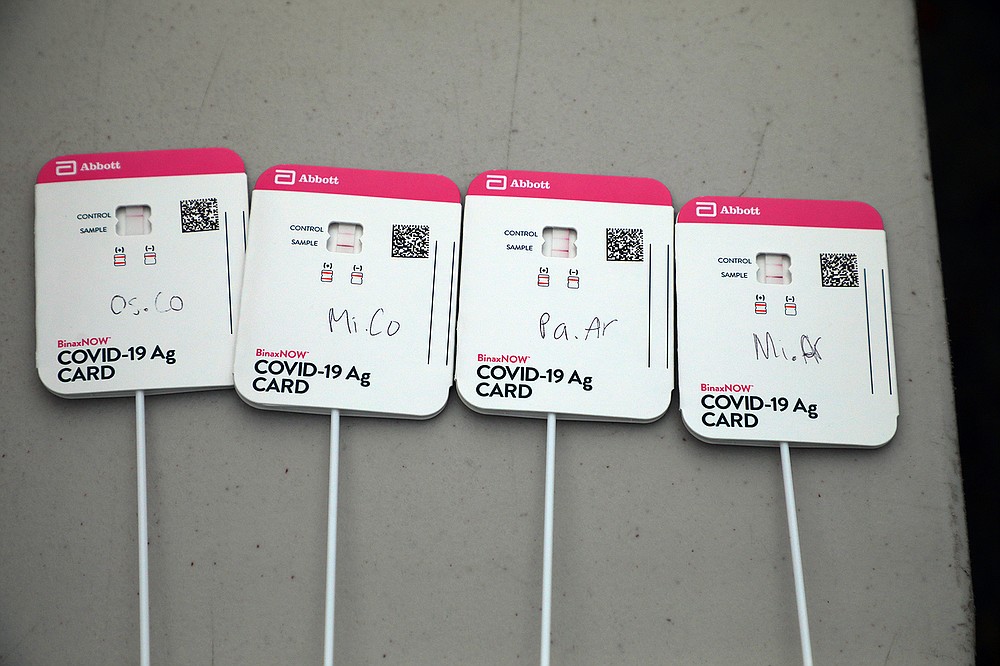 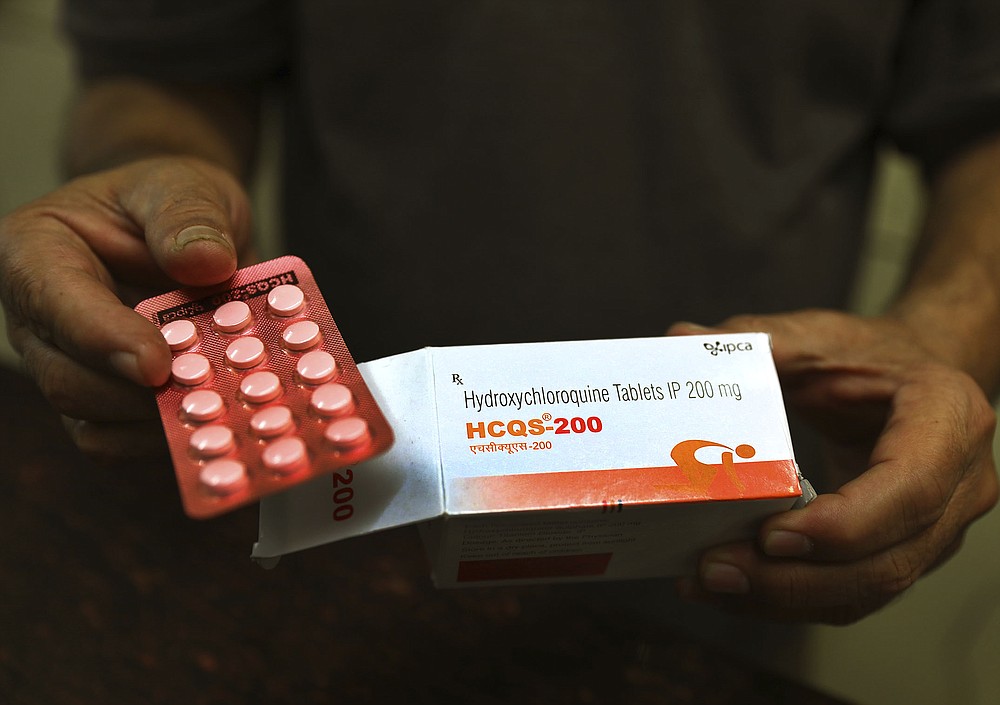