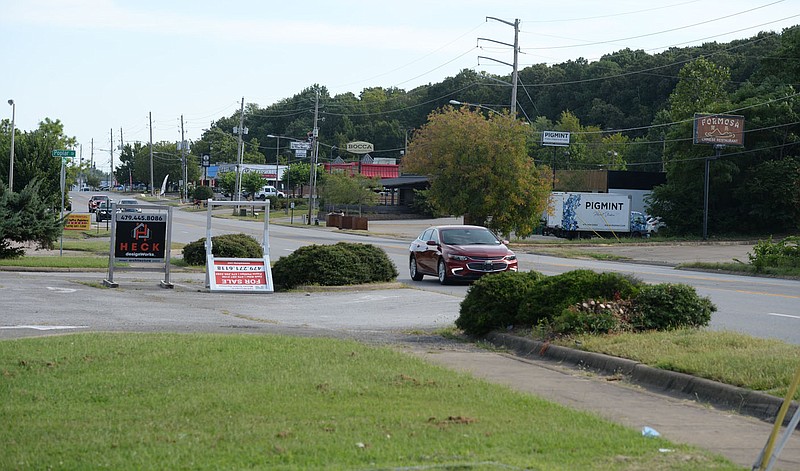 Traffic passes Poplar Street Thursday, Aug. 12, 2021, along College Avenue in Fayetteville. The city is ready to begin detailed design leading to construction for certain stretches of College and South School avenues. A conceptual drawing shows a traffic signal at Poplar Street and College Avenue, with a roadway leading to a parking lot and trail head east of College Avenue, between the former Gypsy building and Formosa restaurant. Visit nwaonline.com/210815Daily/ for today's photo gallery. (NWA Democrat-Gazette/Andy Shupe)

FAYETTEVILLE -- A piece of North College Avenue from near Sycamore to Poplar streets will serve as the focal point of a project to spruce up the main drag through town.

The city has conceptual drawings and a budget outline for work on a few sections of North College and South School avenues.

Administrators hope the work will spur redevelopment along certain stretches, encourage cars to adhere to the speed limit, improve safety for pedestrians and improve the overall look of the corridor.

A transportation bond issue voters approved in 2019 included $10 million for general improvements along what was at the time U.S. 71B, which doubled as North College and South School avenues through the city.

The city has since taken ownership of the corridor from the Arkansas Department of Transportation, enabling it to make changes without getting approval from the state.

In addition to the $10 million available in bond money, the city also can use $1.5 million the Transportation Department gave the city as part of the U.S. 71B ownership agreement. The city also has access to another $1.5 million in federal money through the Northwest Arkansas Regional Planning Commission.

The city has to prioritize the work with about $25 million in changes identified for the project and $13 million available.

The City Council's Transportation Committee on Tuesday only reviewed plans for College Street from North to just north of Poplar Street and South School Avenue from Martin Luther King Jr. Boulevard to 15th Street. Additionally, administrators plan to do only a few of the features proposed for College Avenue from North to Sycamore streets.

Right now, College Avenue has four, 12-foot-wide traffic lanes, a 12-foot-wide turning lane and 10 feet of right of way on each side for sidewalks and green space.

Plans show reducing the traffic lanes and middle lane to 11 feet each. Right of way for sidewalks and green space would increase to 12.5 feet on each side.

City administrators at least want to get new sidewalks on both sides of College Avenue from North to Sycamore streets, crosswalks at most intersecting streets and some street trees and lights on both sides of the road. Other features such as planted medians, storm drainage and integrated art may have to wait, Brown said.

Council member Matthew Petty, a representative of the part of town where the College Avenue work is planned, said he hopes the city can find a way to do most, if not all, the features proposed for the section, especially near Veterans Health Care Center of the Ozarks. The sidewalk near the hospital runs right next to the street, posing a danger for pedestrians, he said.

The road branching off to Green Acres Road would be moved to make it easier for cars traveling south to turn right onto Green Acres. An island of grass at the intersection would have some kind of stormwater management feature and public art display. There is $500,000 proposed in the budget for public art along College Avenue.

A traffic light also is proposed for the intersection at Poplar Street.

South School Avenue south of Martin Luther King Jr. Boulevard to 15th Street would be reduced to three car lanes, with one lane in each direction north and south and a turning lane in the middle. A painted buffer would separate cars from a two-way bicycle lane on the west side. On-street parking also would line certain spots on the west side.

A pedestrian refuge median is planned near 11th Street. Street trees, lights, crosswalks and continuous sidewalks on both sides also are included.

There is $200,000 in the budget proposed for public art along South School Avenue.

The city will seek recommendations from the Fayetteville Arts Council and local artists on the art to be included in the project, Brown said. Engineers and designers will work on finding spaces and providing platforms for the art, he said. Curating the art will go through the city's separate bidding process.

Council member Sonia Gutierrez Harvey, a representative of the south part of town, said she hopes the public art is evenly spread.

"One of the things it really helps with is wayfinding. A lot of people will use 'before the elephant' or 'after the arch,'" she said. "One of the things I'm looking forward to with this whole plan is how we allow some breaks with some visual elements, and I think the public art is such a key part of that."

The project is scheduled as part of the second phase of bond projects the city plans to undertake. Projects in the first phase covering several bond issues, including transportation, parks, trails, drainage, police and fire, started soon after the election in 2019. The city is planning three phases total over about a decade.

The administration is planning to issue bonds for the second phase of projects sometime next year, Brown said. That means residents should expect work to begin in North College and South School avenues by late 2022 at the earliest, or most likely 2023, he said.

To see the conceptual drawings for North College and South School avenues in Fayetteville, go to: nwaonline.com/815drawings/