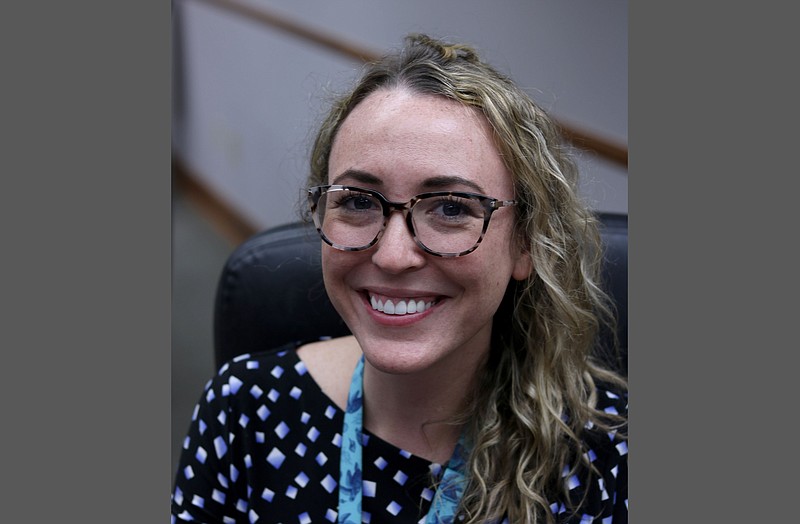 Little Rock Police has begun using a social worker to provide a resource to people who officers encounter in the course of the duties but need help beyond what a typical officer can provide.

Mallory Visser, who worked in the department's victim services department since 2019, said she is excited to be able to help people in her new role.

"It's exciting," Visser said. "There's something new everyday, and I like helping people."

Maj. Casey Clark said the administration of the department was trying to figure out how to solve problems in the community that are not traditional law enforcement issues.

"For us, there are so many mental health issues that we run into on a daily basis that take up time for calls and services," Clark said. "Then we get there, and there's no crime that's occurred or they don't meet the criteria for involuntary commitment or housing in a hospital. It's not a crime to be mentally ill."

According to Clark, a misconception about the role of social workers in police work is that they respond to violent situations. That won't be the case for Visser, he said.

"Miss Visser is not a first responder," Clark said. "She is a secondary resource for when our officers meet someone who fits the criteria of someone in mental distress but not enough to be voluntarily or involuntarily committed."

The number of incoming calls where those who need the kind of services Visser will provide is significant, according to Clark.

That is why, Clark said, the first of three phases in the program will attempt to help people who are responsible for many of the calls that come into the department.

"One of the primary missions that Mallory is working with those frequent callers and finding them resources, mental health resources as well as other resources and helping them get medicated, or hospitalization, or reaching out to families, or finding a new place to live," Clark said.

According to Clark, one of the early cases Visser helped with was a man who was responsible for over 20 calls per month. Clark said he thinks that as Visser works with the police department that she will have a positive impact on the call volume.

Visser has already helped multiple residents with mental health issues find solutions since beginning in the position at the start of July, although it is too early to tell what kind of impact it will have on the amount of time officers spend on these calls.

"There have been referrals coming in from the department asking for some additional help, like someone who calls 20 times and now it's a neighborhood issue," Visser said. "And I've been able to work with the families to make sure they're signed up with Medicaid, receiving any benefits that they're able to get, and then from there making a plan of where they're going to go next so that they can get the mental health or substance abuse treatment that they need."

According to Visser, she spends a lot of time talking with the individuals and families both in person and over the phone "almost daily" to work towards getting them help.

Clark said the second phase will focus on broad community issues relating to mental health, like helping the unsheltered population in Little Rock get help with substance abuse issues, therapy and other areas.

"If we have a lot of unsheltered folks who are downtown in a specific area and there might be an issue and the community comes to us, we will work hand-in-hand in a team approach to find what the best way is to solve these issues," Clark said.

According to Visser, her job will be to inform the unsheltered communities and be a resource for them.

"Some people enjoy being homeless," Visser said. "I'm not in a position to force anyone to do anything, whether that's getting treatment or living in a traditional home. My job is to meet with them, tell them what resources they have, work with them if they want to seek help with a substance abuse issue."

For her third phase, Clark said, Visser will be integrated into officer training to help them understand mental health issues they encounter and recognize them.

"She will be integrating herself with the team in our training division that continues to give veteran and new officers that training in crisis intervention," Clark said. "Basically, that's a crash course in mental illness, how to properly deal with people who might be suffering from some kind of mental illness, that sort of thing."

Down the road, the team will possibly be expanding with several internship positions under Visser who will help cover the entire city, according to Clark.