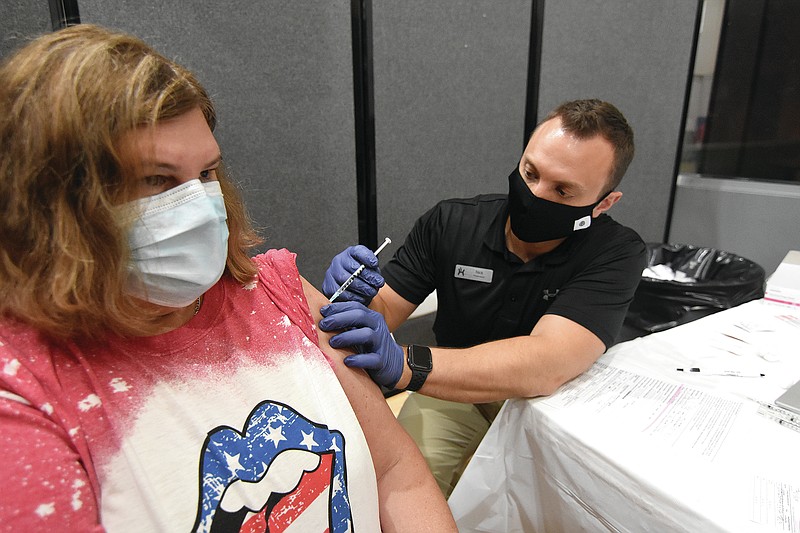 Sandi Elliott of Maumelle receives a dose of the Johnson & Johnson coronavirus vaccine from Nick Dziurkowski, a pharmacist for the Pharmacy at Wellington, Sunday, June 27, 2021, during the Community Health Fair at the Islamic Center of Little Rock. (Arkansas Democrat-Gazette/Staci Vandagriff)

While the number of new covid-19 cases announced Monday was lower than a week ago, patients on ventilators in Arkansas reached a record high of 323 -- 20 more than the previous day -- according to the Arkansas Department of Health.

Covid-19 hospitalizations climbed by 46 to 1,459, breaking Friday's record by one. The department reported 31 more deaths from the virus, bringing the cumulative total to 6,498.

"Today's report shows another high day of hospitalizations and deaths from COVID," Gov. Asa Hutchinson said in a Twitter post.

But he added: "Our vaccine numbers are up from last week, a trend that needs to continue. As many children across Arkansas head back to school today, I am praying for a safe and productive year."

The number of covid-19 patients in intensive care totaled 553.

Another 856 cases were added Monday, bringing the cumulative total to 420,663.

Case numbers are typically lower on Mondays because fewer people get tested over the weekend, state Epidemiologist Jennifer Dillaha said. A week ago Monday, on Aug. 9, the state reported 995 new cases. Two weeks ago, the state had 844 new cases. By contrast, on other days of the week, the state has sometimes topped 3,000 cases recently.

Health Department spokeswoman Danyelle McNeill said the increase in ventilator usage is likely related to the ravages of the delta variant, compared with other versions of the coronavirus.

"The delta variant is causing more severe disease in a higher proportion of patients than what was circulating before," she said. "What is also different about this variant is the number of younger people who are needing a ventilator. By far, the majority are unvaccinated."

As of Monday, the state had 1,049 ventilators in inventory, but only 515 -- or about 49% -- available for use, the lowest point since the pandemic began. There were 17 fewer ventilators this week compared with the previous Monday, Aug. 9, when 532 were available.

When it comes to ventilator usage, the Little Rock metro region had the highest number with 126 admissions on ventilators. That's up 26 a week ago.

A ventilator is used to help people breathe when they can't breathe on their own, Wade said. A tube from the ventilator machine is inserted through the mouth down into the windpipe. The end of the tube blows oxygen into the lungs.

"While on a ventilator, you cannot eat or drink and nutrition is given through a small tube in the nose. You also cannot talk while on a ventilator, but some patients that aren't sedated can write notes to communicate," Wade said. "Patients are removed from the ventilator when they can breathe on their own without support and maintain their own oxygen levels."

Baptist Health has surpassed its record of hospitalized covid patients across the system, Wade said. The previous high was last week when the hospital system reached 278 covid patients, but that number reached 288 on Monday with 84 of those on ventilators.

"We monitor daily our ventilator supply throughout our system. Though it is possible to run out of ventilators, we have plans and alternative methods to help keep that from happening," Wade said. "Ventilators can be moved around across our Baptist Health hospitals or a patient could be potentially transferred to a facility if there was a need."

Meanwhile, the number of vaccine doses that providers reported having administered, including second doses of the Pfizer and Moderna vaccines, rose by 7,443 to 2,524,334.

"We are very pleased with the vaccination rate and have experienced a monthly growth in demand of almost 300%," retired Air National Guard Col. Robert Ator, who is coordinating Arkansas' vaccination effort, said in an email. "Of particular note is that, on average, 65-70% of the vaccinations are first doses, which leads us to believe that the current demand signal will remain for the next 30-60 days as we pass out the second doses."

Of the 3,173,450 total doses received by the state, 79.5% have been administered, according to Health Department data.

"We have received over 84,000 doses in the past week to replenish the vaccine that is being administered. This is very much a good thing," Ator said. "We have maintained at least a two-week supply in every public health region and will continue to order to support that supply. We do not expect any further loss to expiry."

The number of individuals 12 and over partially immunized increased by 2,343 on Monday to a total of 353,657 or 13.8% of that group. Children under 12 can't be immunized under current federal authorization.

"For this to happen, a large majority of the population will need to develop immunity to the virus that causes covid-19, and the best way for people to develop immunity is for everyone that is eligible to get vaccinated," Dillaha said. "Depending on natural immunity to covid-19 will likely be ineffective for stopping the pandemic, because many more people who have had covid-19 but remain unvaccinated will get re-infected compared to people who have had covid-19 and then also get vaccinated."

The Arkansas Foundation for Medical Care and the Arkansas Department of Health are partnering to provide the vaccine from noon to 6 p.m. today at the foundation's offices, located at 1020 W. Fourth St. in Little Rock.

Total hospital beds in the state -- whether filled or vacant -- increased by 32, going from 8,644 on Sunday to 8,676 on Monday, according to Health Department data.

The total critical care beds, filled or vacant, remained the same at 1,121. That means that more than 98% of the special-care beds are full.

The total bed capacity -- hospital beds that can be staffed whether or not they are occupied -- was at 8,814 on Monday, according to Health Department data.

The maximum flex bed capacity, the number of beds at the hospital regardless of the facility's ability to staff them, was at 11,394.

According to a Health Department report released Monday, the number of cases in Arkansas found to have been caused by the delta variant, which first emerged in India, rose by 601, from 1,564 on Aug. 7 to 2,165 on Aug. 14.

The delta variant is the only one in the state that has affected children from birth to 4 years old, with the 25-44 age group being hit the hardest by the variant, according to the report.

The number known to have been caused by the alpha variant from the United Kingdom rose by 98, to 706.

Health Department data indicated that Pulaski County had the largest increase in total cases, with the count rising by 140.

Benton County had the next-largest increase, 85, followed by Craighead County with 82.