Even as infections ebb, Indians fearful of third wave 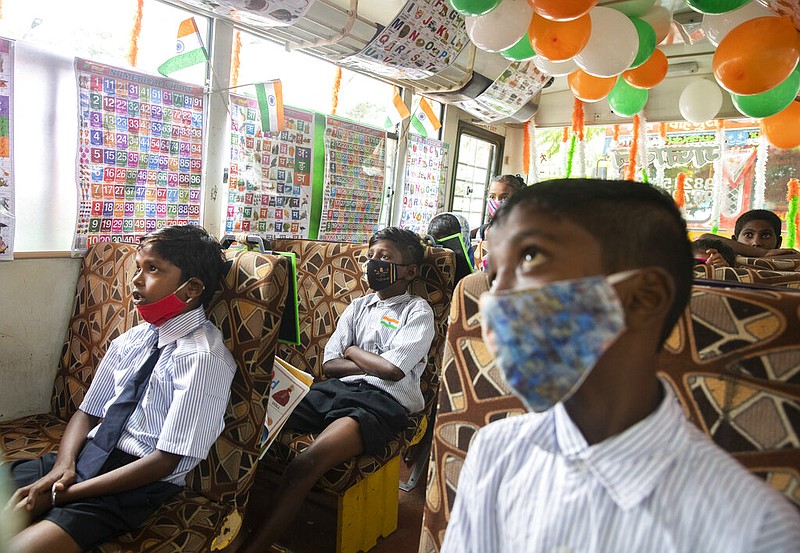 Children wearing masks attend a mobile classroom for children of a slum set up inside a parked bus by a social activist in Mumbai, India, on Sunday, Aug. 15, 2021. (AP/Rafiq Maqbool)

In the state of Maharashtra, one of the first places struck by India's devastating second wave of covid-19 this year, scientists are anxiously looking for signs of a third.

New laboratories in the financial capital, Mumbai, and in the city of Pune are searching for dangerous new variants. They have stepped up testing, to more than 3,600 samples per month from 134 in December, as they search for mutations that could make the virus even harder to stop.

[Video not showing up above? Click here to watch » https://www.youtube.com/watch?v=RQ2SRsnhavk]

India is still far short of its goal of increasing genome sequencing nationwide. While covid-19 cases and deaths have plunged, according to official numbers, the virus is continuing to spread in some parts of the country. A low vaccination rate and other factors have left India especially vulnerable to variants such as delta, the strain that helped power India's second wave over the spring.

"We need to track new variants to prepare ourselves for the next wave because waves will keep happening, much like the flu or common cold, which keep recurring because the virus mutates or recombines," said Dr. Vinod Scaria, principal scientist at the Institute of Genomics and Integrative Biology in New Delhi. "You can't really prevent that. But you can always be prepared for it."

The second wave, which exploded across the country in April and May, exposed both the delta variant's increased communicability and India's inability to cope. Official figures show that about 430,000 people have died since the virus hit early last year, though the numbers are widely considered unreliable and experts say the toll may be in the millions. The second wave pushed the country's medical system past its limits and led to anger over the government's inability to handle the crisis.

For now, the disaster appears to have ebbed. India's daily official caseload has fallen to about 40,000, compared with the more than 300,000 it saw during the worst of the crisis. The hardest-hit urban centers like New Delhi, Mumbai and Pune have had a dramatic decline in cases. Covid-19 wards in many major cities have emptied.

Some hope that the sheer contagiousness of the delta variant means that many people have already caught it and developed a measure of protection. A recent survey by the Indian Council of Medical Research, a government agency that funds and evaluates studies, found that two-thirds of blood samples surveyed had coronavirus antibodies, compared with about one-quarter in December and January. In some states, as many as three-quarters of samples surveyed carried antibodies.

However, scientists cautioned that the survey, with a small sample size of 36,000, shouldn't be read as an indication that India is out of the woods. Such tests can be prone to false positives. Also, the survey doesn't represent all areas, said Giridhara Babu, professor of epidemiology at the government-affiliated Public Health Foundation of India, though it could help Indian officials better target areas for testing and vaccinations.

The potential for new variants complicates the picture even further. Places such as India with low vaccination rates and other risk factors are particularly vulnerable to new strains.

After a chaotic and slow start, India has intensified its inoculation drive, regularly delivering 5 million doses per day. About half a billion doses have been administered, and more than 100 million citizens are now fully vaccinated. Indian medical experts hope the increased vaccinations will help blunt the effect of a third wave because even one shot can reduce the severity of infection.

Still, only 8.5% of the population is fully vaccinated. It remains to be seen whether the country can reach its goal of vaccinating the entire adult population of 900 million by the end of the year.