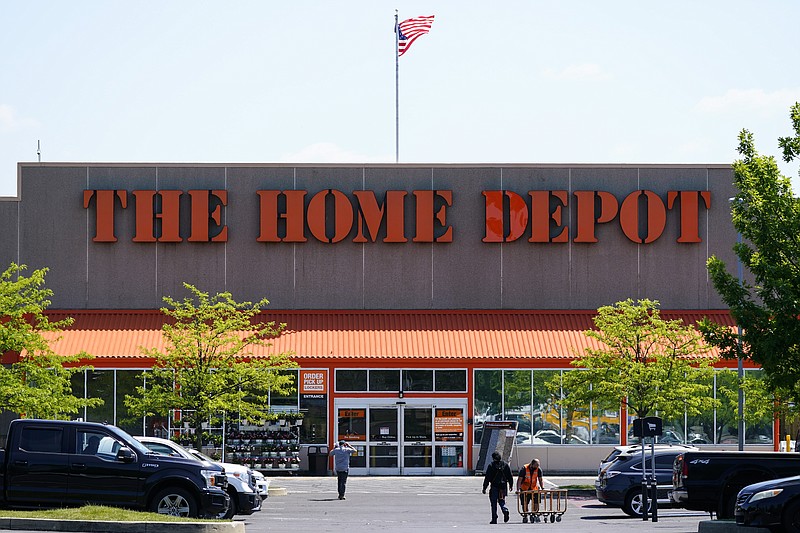 This May 19, 2021 photo shows The Home Depot location in Willow Grove, Pa. Home Depot&#x2019;s sales continued to rise in its fiscal second quarter, thanks to a housing market that remains hot. Chairman and CEO Craig Menea said in a statement on Tuesday, Aug. 17, that this was the first time in its history that the chain surpassed sales of more than $40 billion in a quarter. (AP Photo/Matt Rourke)

Home Depot's sales continue to surge, though same-store sales appeared to come back to earth after a year in which the home-improvement chain outperformed expectations repeatedly.

For the three months ended Aug. 1, sales climbed to $41.12 billion from $38.05 billion. Craig Menear, chairman and chief executive, said in a prepared statement Tuesday that this was the first time the chain surpassed quarterly sales of more than $40 billion.

Revenue also surpassed the $40.71 billion analysts were expecting, according to a survey by Zacks Investment Research.

However, sales at stores open at least a year, a key indicator of a retailer's health, increased 4.5%, and 3.4% in the U.S. Wall Street had expected same-store sales of 5.4% according to FactSet.

And while the average receipt per ring-up at Home Depot registers was higher, customer traffic slowed compared with the period last year when the pandemic kicked off frenzied do-it-yourself projects at home.

Home-improvement stores have filled during the pandemic as people working from home took on new projects. Many also moved to places with more room for the home office, and that, too, fueled sales.

Yet sales of new homes fell for a third-straight month in June, dropping by 6.6% to the lowest level in more than a year.

Neil Saunders, managing director of GlobalData, said in an emailed statement that most of last year's sales growth was caused by an increase in customers and a sharp rise in the volume of products bought thanks to the remodeling and decorating increase that happened while people quarantined.

"These trends are now abating, albeit gradually, which is evident in the decline in the number of shoppers visiting Home Depot during the quarter," he said.