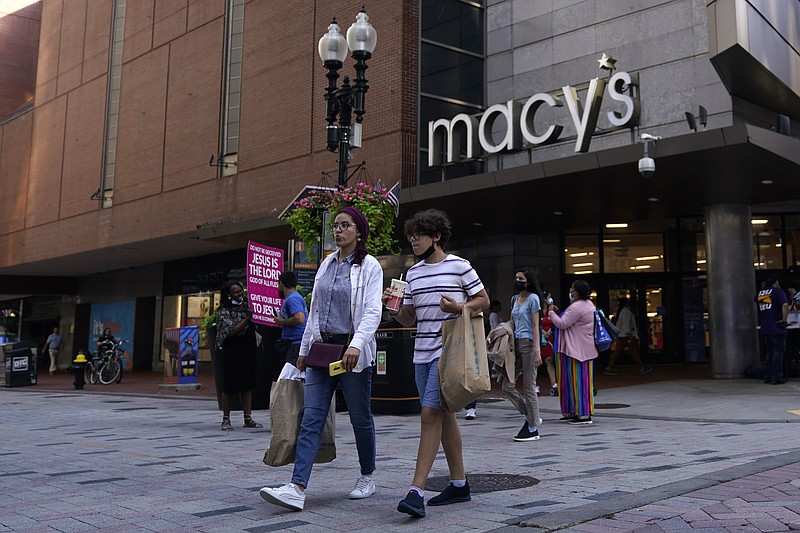 FILE - In this July 14, 2021 file photo, pedestrians pass the Macy's store in the Downtown Crossing shopping area, in Boston. Americans cut back on their spending last month as a surge in COVID-19 cases kept people away from stores. Retail sales fell a seasonal adjusted 1.1% in July from the month before, the U.S. Commerce Department said Tuesday, Aug. 17. (AP Photo/Charles Krupa, File)

NEW YORK -- Americans cut back on their spending last month as a surge in coronavirus cases kept people away from stores.

Retail sales fell a seasonal adjusted 1.1% in July from the month before, the U.S. Commerce Department said Tuesday. It was a much larger drop than the 0.3% decline Wall Street analysts had expected.

According to Tuesday's report, spending fell at stores that sell clothing, furniture and sporting goods. At restaurant and bars, spending still rose nearly 2%, but the rate of growth has slowed from recent months before the delta variant spread and people were feeling safer about dining with others without masks.

Economists think Americans are shifting their spending from goods to services, things like haircuts or vacations, which are not included in Tuesday's report. And rising prices for everything from food to washing machines may have checked spending.

Major retailers are releasing quarterly financial results this week, offering more insight into behavior during yet another uptick in infections. On Tuesday, Walmart raised its sales outlook for the year, a sign that it expects Americans to keep on shopping at the same pace.

But the Commerce Department reported Tuesday that even online sales have begun to slow, falling 3.1% from the month before. Companies have reported a slowdown after astronomical growth last year as people stayed home and shopped more online during the pandemic.

Ebay, for example, said that its number of active shoppers slipped 2% to 159 million in its latest quarter. UPS said that it is shipping fewer packages in the U.S. Amazon, the world's largest online retailer, said online sales grew 13% in its most recent quarter, the company's smallest quarterly online sales growth in two years.

Sales at restaurants, the only services-spending category in the retail report, rose 1.7%, the smallest advance in five months. Restaurant spending could soften in the coming months, depending on the path of the delta variant. Total card spending from Bank of America Corp., decelerated at the end of July, while OpenTable restaurant bookings have moderated.

Sales at motor-vehicle and parts dealers slumped 3.9% in July after a 2.2% slide a month earlier, likely in response to limited inventory and higher prices as automakers face supply-chain constraints.

There also were declines in sales at apparel retailers, building-supply outlets and furniture stores.

"There are signs that pent-up demand has passed its peak," said Ted Rossman, an analyst at CreditCards.com. "The first round of advance child tax credit payments went out in July, and unlike previous rounds of government stimulus, this didn't lead to an immediate pop in retail spending."

Consumer sentiment -- which nose-dived between July and August -- has hit a 10-year low, according to a closely watched measure released last week by the University of Michigan.

"Consumers reported a stunning loss of confidence in the first half of August," Richard Curtin, chief economist of the consumer survey, said in a statement. "There is little doubt that the pandemic's resurgence due to the Delta variant has been met with a mixture of reason and emotion."

Consumer spending drives roughly 70% of the U.S. economy, making it a crucial component of the recovery. Wall Street signaled its disappointment in the retail report, with the Dow Jones Industrial Average shedding almost 300 points in New York trading. The S&P 500 and Nasdaq also traded lower.

The slowdown in spending takes place as retailers begin reporting quarterly earnings. Two of the nation's largest chains -- Walmart and Home Depot -- said Tuesday that sales had picked up in the most recent quarter, though the rate of growth had slowed from earlier in the year.

Sales at Walmart rose 2.4% in the second quarter, compared with a 5.6% increase a year earlier, when shoppers were stocking up on food and households essentials.

Growth also cooled at Home Depot, where much of last year's sales spikes were driven by stimulus payments and enhanced unemployment benefits. And as vacations were canceled and commutes eliminated during the coronavirus pandemic, many consumers channeled those savings into upgrading their homes.

Those who did shop at Home Depot spent more on average as the average ticket size rose by 11%, helping drive the company's sales up 8.1% over the previous year. But analysts said the increase was likely driven by spiking lumber prices and not by customer demand.

Information for this article was contributed by Joseph Pisani of The Associated Press; by Olivia Rockeman of Bloomberg News (TNS); and by Abha Bhattarai and Aaron Gregg of The Washington Post.