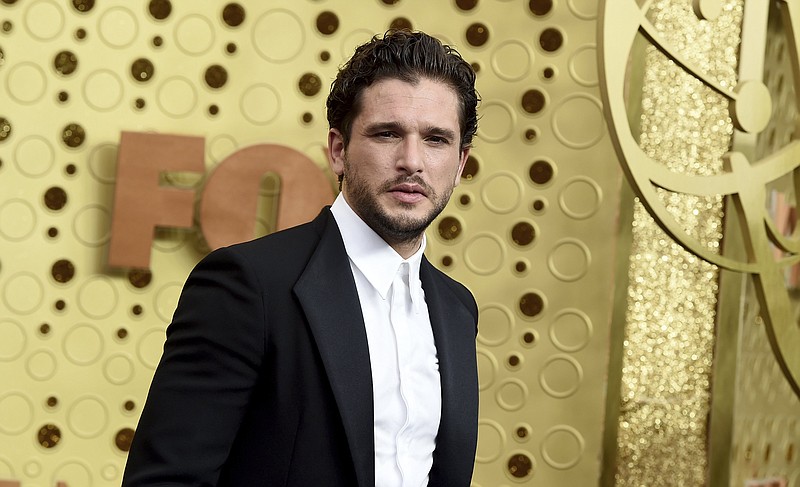 Kit Harington appears in the second season of “Modern Love,” in which he plays a tech worker and a hopeful romantic dazzled by a woman he meets on a train. It’s a far cry from his role as Jon Snow on HBO’s “Game of Thrones.” (Jordan Strauss/Invision/AP file)

LOS ANGELES — In "Game of Thrones," Kit Harington famously played the brooding Jon Snow through eight seasons, stalking icy landscapes and dark castles, trying to figure out how to save humanity.

Now Harington has hung up his bulky black fur coat for a lighter role in the new season of "Modern Love," based on The New York Times column about real-life love stories. Each episode tells a different story with different actors. The series is now streaming on Amazon Prime.

In it, Harington plays a tech worker and a hopeful romantic dazzled by a woman he meets on a train.

"It was a breath of fresh air," Harington said recently from New York. "You don't get to spend eight years being the most serious, grumpy human being on the planet without wanting to go and do something a bit lighter afterwards."

Harington, who fell in love with and married his "Game of Thrones" co-star Rose Leslie, said that part of the reason he was attracted to "Modern Love" is that "our love lives and our love histories are made up of anecdotes" like those in the series.

The combination of all those stories "creates something beautiful."

He also was sold on the script after cracking up at a "Game of Thrones" joke in it. The joke comes as Harington's character is describing the woman he's fallen for; she's a medievalist.

"That was actually one of the things that made me want to do this piece, was that joke. I just thought it was kind of meta and wonderful and hilarious," Harington said. "And John (Carney), the director, asked if I wanted him to cut that joke. And I said, 'No, keep it in.' Personally, I love self-deprecation and sort of pointing the finger at oneself."

As for his character, who arranges to meet the woman of his dreams in person in two weeks rather than get her number, Harington said he couldn't help but judge his plan, given that the story is set at the beginning of the coronavirus pandemic just before lockdowns were put into place.

"He makes a big swing at something really romantic," Harington said. "I don't think I would have gone quite as far, you know. I'm a bit like, 'You idiot. You should have got her number.'"

Carney, who directs Harington's episode among others this season, said the whole series was shaped by the pandemic, though most of the episodes don't directly have anything to do with it.

"The last thing we want to be doing when we come out of this is watching people with masks on in TV, which is oh so woke and up to date that it's about COVID," he said from his home in Dublin. "I don't think anybody really wants to watch that and given the news is so full of it anyway."

What Carney tried to do, he said, was make television that was useful.

"It isn't just mindless entertainment or like, escapist romance," he said. "There's something more tragic and more human to it, and it could still have uplift and still have hope and be optimistic.

"I think we've done a good job and the actors did a great job in acknowledging that there's this other thing in love and romance now, this other fact in our lives now that's so enormous and it's right there," Carney said. "We don't have to always show it and point the camera at it, but we have to be respectful of it."

For Harington, the pandemic has been an "incredibly sad and incredibly profound, incredibly important time for me."

He and Leslie had a baby boy six months ago. "So in many ways, it's beautiful things that have come out of it for me personally. And I'm very grateful for that."

As for his former "Game of Thrones" life, Harington said it's not quite completely over.

He said he's planning to watch HBO's prequel, "House of the Dragon," set 300 years before "Game of Thrones," when it premieres in January.

"It's being written and produced and run by a very good friend of mine, Miguel (Sapochnik), who directed me in the original 'Thrones,'" he said. "It might be painful to watch, you know. I think there's so much tied up in that, that I might find it hard, but I would like to watch it and support him and support his work, and I wish them the best with that."