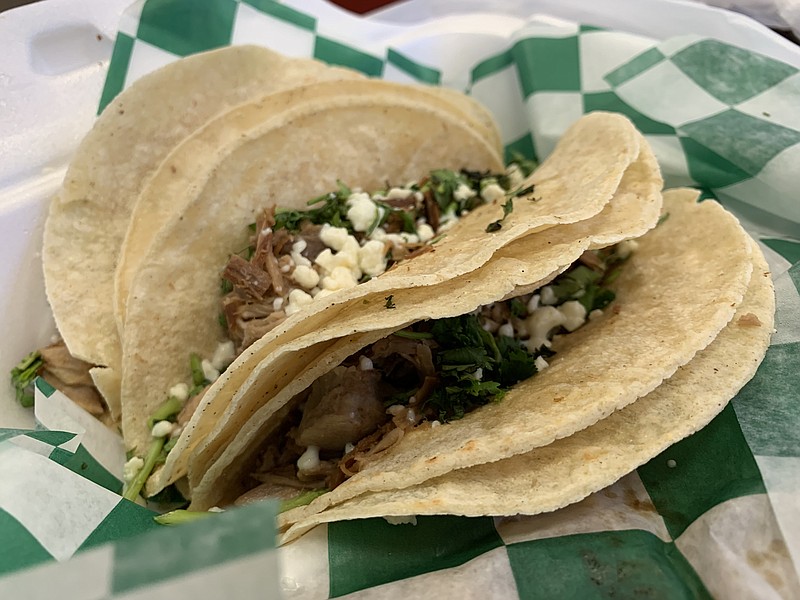 The resurgence of the pandemic and the advent of the nefarious, insidious delta variant has made people more nervous about dining in, and looking at the drive-thrus of various area establishments, has given a whole new meaning to the term "pickup lines."

So we're taking to takeout again this week, with the usual baselines: We're sticking primarily to locally owned or franchised establishments, within a reasonable radius to ensure that food is still hot, or at least edibly warm, when we get it back to home base, and we pay for all our meals up front.

This is an offshoot, more or less, of Rock City Kitchen, on which we reported a while back, and which fairly recently opened in a tiny space that most recently housed a poke place. Their twist on typical tacos, burritos, etc., is that they center on smoked meat rather than, say, the carne asada or puerco al pastor that you'd find in typical Mexican tacos.

We ordered the three-taco set with smoked pork on soft corn tortillas; they came out of the kitchen topped only with some crumbled feta-like queso fresco. The counter person then dressed them to order from the topping bar — cilantro, onions and various peppers, lettuce, etc. Salsas, guacamole, sour cream and more cheese are available in little plastic takeaway cups. The taco plate comes with a moderately flavorful Mexican rice and dry (rather than soupy) and pretty tasty refried beans.

We also indulged in a side item: roasted corn on the cob topped with butter, Mexican sour cream, chile powder, cheese and lime; we unfortunately let it cool while we attended to our tacos but enjoyed it nonetheless.

HOW IT WENT: It took about five minutes for our food to come out of the kitchen.

HOW IT'S GOING: Shortly after it opened, the place was constantly packed, with lines out the door and parking places within easy walking distance impossible to find. Several weeks later, ours was the only order late in a lunch cycle. 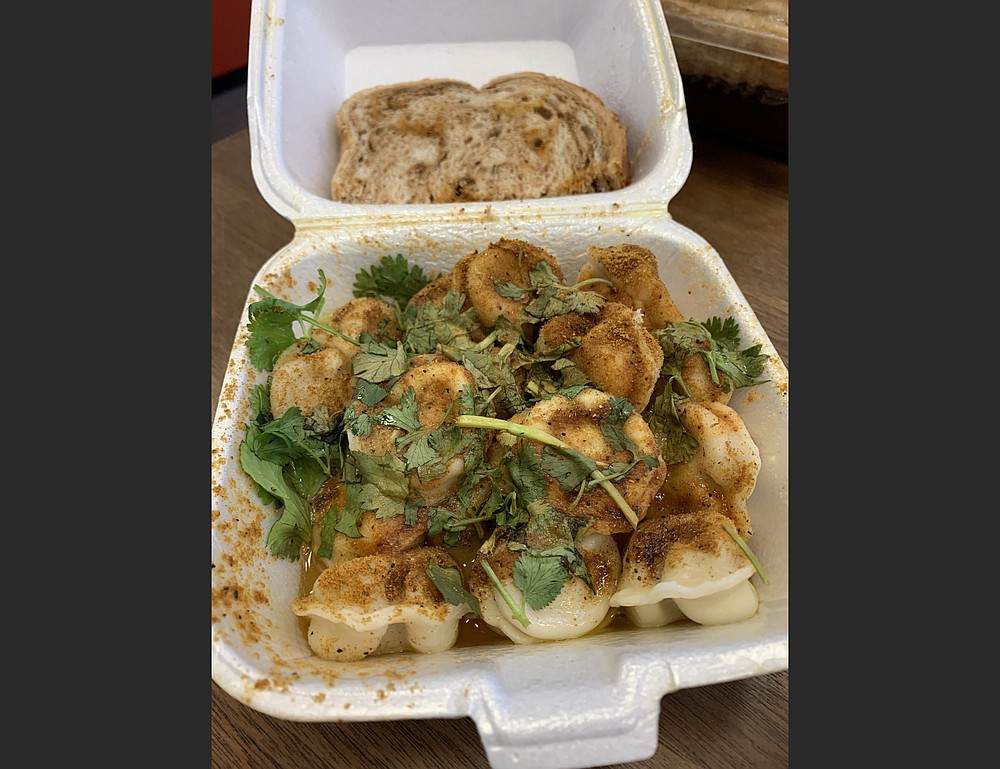 We ordered our tortellini-like pel’meni with the works from the Slader’s Alaskan Dumplings food truck. (Arkansas Democrat-Gazette/Eric E. Harrison)

Pel'meni are small Russian dumplings, about the size of, and with a strong resemblance to, tortellini, and which are apparently a big hit in Alaska. (The website for this Searcy-based operation includes considerable detail on its founder's Alaskan background.) The food truck is parked at the confluence of Cantrell and Cedar Hill roads, on the parking lot of a former bank, and has taken the place of Excaliburger, which is involved in a project in Louisiana.

These are filled with a mixture of spiced ground beef and/or shredded chicken, boiled with a butter glaze, and if you want them with "the works," a light dusting of ground curry powder and finely chopped cilantro, plus side cups of Sriracha and sour cream. An order consists of 15-20 dumplings, which is just enough for a good-sized meal. Ours were delicious, with just enough kick that we didn't really need the hot sauce; the sour cream made for an additional flavor/texture dimension.

The other option on Slader's menu, which some day soon we'll try: potato and cheese pierogi, in a similar pasta shell, and available similarly topped.

HOW IT WENT: It took only a couple of minutes to prepare and pack up our order.

HOW IT'S GOING: The food truck has not been overwhelmed with customers at any time we've stopped or driven by. We were the only order for an early dinner. 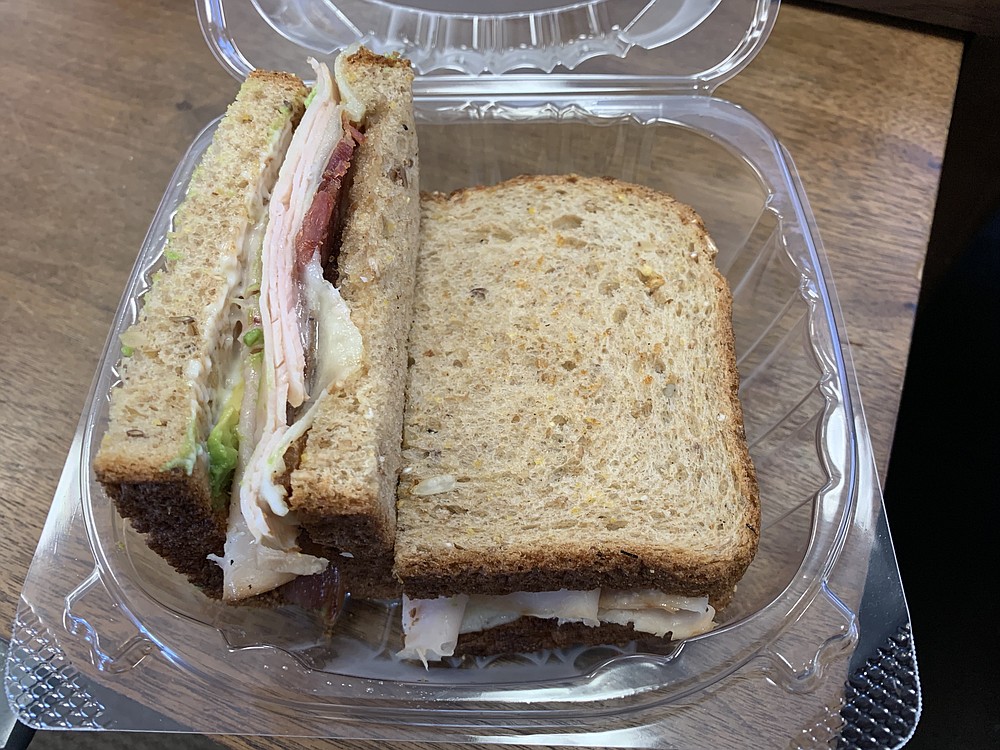 This newly opened coffee shop, which replaced Blue Sail in the Little Rock Tech Park building on Little Rock's Main Street, offers the usual astounding range of coffee- and tea-based concoctions, plus pastries from Community Bakery and a few food items produced in house. For example, the daily "melt" sandwich, which staff identifies in answer to the question "what's hot?" On a recent early-week lunch visit, what was hot was a turkey melt — an ample portion of sliced, smoked turkey with bacon, cheese, lettuce, tomato and a pesto mayonnaise on multigrain bread (we eschewed the veggies). Our sandwich was hefty and tasty, though perhaps the bacon might have been crisper. Our lavender lemonade was tart and fresh-tasting.

HOW IT WENT: It took nearly 15 minutes for our sandwich to be constructed and heated in a tiny oven until the cheese melted.

HOW IT'S GOING: There were other customers in the shop, all of whom had either been served or were just using the facility for the Wi-Fi. A few folks ordered coffee concoctions behind us; shortly before the staff member handed over our sandwich, Gov. Asa Hutchinson came by. (We don't know what he ordered.) 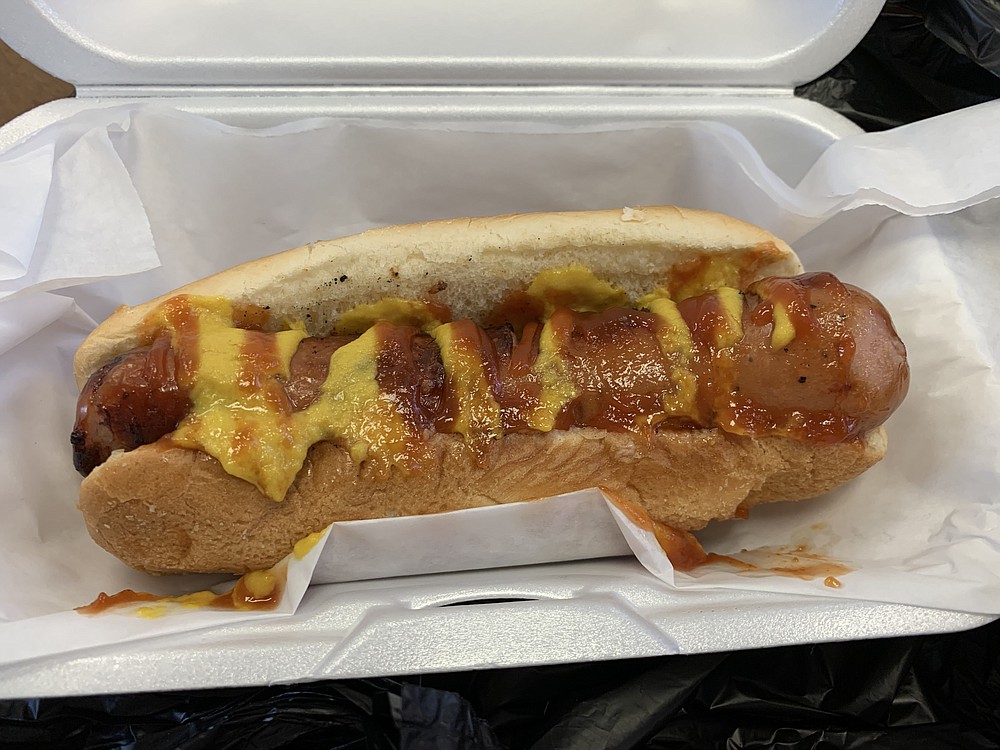 Want something simple from from Lea Lea’s Gourmet Dogs & Daiquiris? Try this Dog Catcher, which we got with a Polish sausage for an extra $2. (Arkansas Democrat-Gazette/Eric E. Harrison)

WHAT WE GOT: Dog Catcher ($3) with a Polish sausage ($2 extra), small virgin strawberry daiquiri ($5)

But if you're looking for something simple, there's the $3 Dog Catcher, a dog on a bun with mustard and ketchup. Except we didn't want it quite that simple, so we spent an extra $2 to make it a Polish dog (with a thick, pinkish-interior Polish sausage). That made for pretty good eating. All of the ingredients listed on the specialty dogs are available as "doggone add-ons" for 95 cents-$2. There's also footlong and vegan dog options and a dog-fries-drink combo. Non-dog menu items include nachos, frito pies and a grilled chicken salad, plus, for dessert, a mini-Key lime pie, Kool-aid pickles and a rocky road brownie.

Behind the counter, nine machines spin the blendings for fruity daiquiris, simple — strawberry and peach — to the elaborate — L.I.I.T. (apparently that's Long Island iced tea), pina colada and Slurricane. As of this writing Lea Lea's alcoholic beverage license hadn't yet come through, so they're all "virgin" daiquiris (we're told they're eventually going to wine-based, not rum-based). Our strawberry daiquiri turned out to be surprisingly tart.

HOW IT WENT: The charming young woman at the front counter helped us negotiate our way through our order, which took less than five minutes to emerge from the kitchen.

HOW IT'S GOING: There was one to-go order ahead of us and two women were picking up a call-in order as we were leaving. 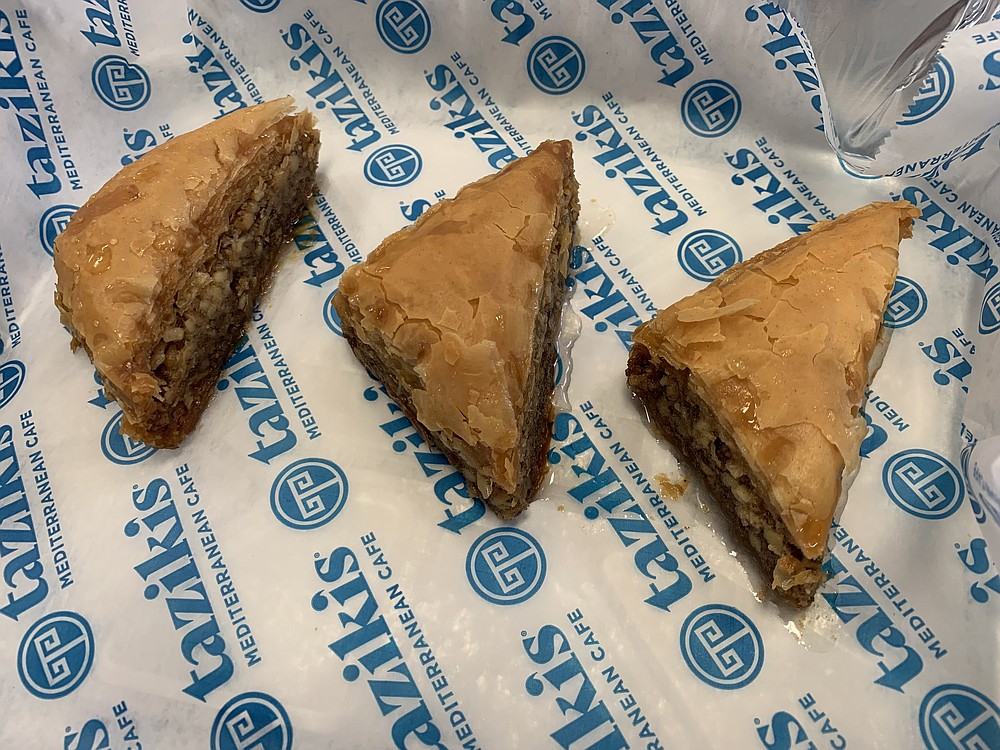 Taziki's made good on the baklava that was missing from our recent order by dropping off three pieces at our office. (Arkansas Democrat-Gazette/Eric E. Harrison)

◼️ And an addendum: In our July 29 report, we griped that we'd ordered and paid for a piece of baklava at Taziki's Mediterranean Kitchen, 8200 Cantrell Road, Little Rock, but it was missing from our order when we got it back to the office. It's hopefully something they might have done for any customer, though probably it's because we ran something in the paper, but the management recently dropped off at our office three make-good pieces of baklava. We gave two of the pieces away to colleagues, but the one we saved for ourselves was nicely flaky and sweeter than some baklavas we've had recently. So, thanks.

Print Headline: Picking up all over