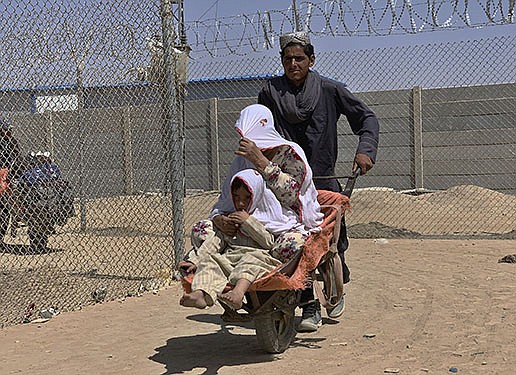 A man pushes a woman and her son into Pakistan from Afghanistan at a border crossing point Thursday in Chaman, Pakistan. (AP)

WASHINGTON -- President Joe Biden said that even with the Taliban in power in Afghanistan, he sees a greater threat from outposts of al-Qaida and its affiliated groups in other countries, and that it was no longer "rational" to continue to focus U.S. military power there.

"We should be focusing on where the threat is the greatest," Biden said in an interview that aired Thursday on ABC's "Good Morning America".

Biden has said repeatedly that America will not send significantly more forces to fight in Afghanistan. The U.S. has not had tens of thousands there for several years and had 2,500 to 3,000 deployed there when Biden took office.

The comments were made as the Biden administration has faced sharp criticism for the timing and execution of the Afghanistan withdrawal, after the Taliban seized power more quickly than administration officials predicted.

Biden also pushed back against concerns about the treatment of women and girls in the country, arguing that it's "not rational" to try to protect women's rights around the globe through military force. Instead, it should be done through "diplomatic and international pressure" on human-rights abusers to change their behavior.

[Video not showing up above? Click here to watch » arkansasonline.com/820taylor/]

Up to 15,000 Americans remain in Afghanistan. Biden said during the same interview that he's committed to keeping U.S. troops in Afghanistan until every American is evacuated, even if that means maintaining a military presence beyond his Aug. 31 deadline for withdrawal.

Pressed repeatedly on how the administration would help Americans left in the nation after Aug. 31, Biden said, "If there's American citizens left, we're gonna stay till we get them all out."

Biden told ABC that there wasn't anything his administration could have done to avoid such chaos.

"The idea that somehow, there's a way to have gotten out without chaos ensuing, I don't know how that happens," he said.

Senior U.S. military officers were talking to Taliban commanders in Kabul about checkpoints and curfews that have limited the number of Americans and Afghans able to enter the airport.

Nearly 6,000 people had been evacuated by the U.S. military since Saturday, a White House official said Wednesday night.

The top congressional Republicans, Rep. Kevin McCarthy and Sen. Mitch McConnell, asked Biden on Wednesday for a classified briefing with the "gang of eight" -- the top Democrats and Republicans on the House and Senate intelligence committees as well as House Speaker Nancy Pelosi, Senate Majority Leader Charles Schumer, McCarthy and McConnell.

McCarthy and McConnell said they want a briefing on the number of Americans still in Afghanistan and the plans to evacuate those outside of Kabul. Their letter prompted Pelosi spokesman Drew Hammill to tweet that she already had requested such a meeting. He also said House members will receive an unclassified telephone briefing today and an in-person briefing Tuesday.

In the chaos of renewed Taliban rule and the evacuation efforts, Afghanistan's economy faces calamity.

[Video not showing up above? Click here to watch » arkansasonline.com/820wardak/]

Sunday, the U.S. Treasury Department froze Afghan central bank assets kept in the U.S. The move will prevent the Taliban from accessing the bulk of the $9 billion in central bank reserves held by the Afghan government, but could exacerbate the financial crisis feared by many experts.

The International Monetary Fund also announced this week that Afghanistan would not have access to hundreds of millions of dollars in emergency funds that were scheduled to be disbursed to the country next week.

The dangerous economic climate developed as the Biden administration faces critical decisions over how to maintain leverage over the Taliban without allowing the country to tip into an economic disaster that would likely hurt everyday Afghans.

Senior officials in Afghanistan's toppled government have warned in recent days that parts of the nation's economy are on the brink of devastation, given the country's high dependence on international funding. Acting central bank governor Ajmal Ahmady, who recently fled the country, said in an interview that the nation's economy faces severe strains as foreign capital and aid are choked off.

Similarly, Wahid Majrooh, the acting minister of public health in Afghanistan, said he is "deeply, deeply concerned" about cuts in international aid and funding for the Afghan government's national health care system. Majrooh said in an interview that he is already facing shortages of critical medical supplies and other "basic supplies for emergency rooms." He said he is pleading with international officials to maintain public health funding for Afghanistan but has largely not yet received a clear response.

Exports and imports are reported to have cratered as major borders close to traffic. A half-dozen people in communication with Afghan residents reported dramatic price increases and shortages in grocery stores. Fears are mounting about the impact of a failure of the largest employer in the country -- the Afghan government -- to pay its workforce when paychecks are due this month.

"The situation will be dire," Majrooh said.

Biden administration officials have said they will resume the flow of humanitarian aid, but they have not signaled how they plan to proceed.

Biden vowed in his public address earlier this week that aid to the Afghan people would continue, but that pledge may prove difficult to keep in practice, given the prospect of the Taliban standing between international donors and the intended recipients of the money. The U.S. is also not expected to lift financial restrictions on the Afghan government until the White House sees how the Taliban governs the country, posing a further logistical hurdle.

Roughly 80% of the Afghan government's budget comes from international grants and aid, according to PGIM Fixed Income, a global income manager. Billions of dollars in congressional appropriations to Afghanistan -- primarily in the form of military support -- are expected to cease flowing.

White House national security adviser Jake Sullivan reiterated Tuesday that the U.S. has means of delivering aid to those in need in a way that bypasses other governments.

White House and State Department officials say the U.S. will continue to provide aid to Afghanistan as it has in other countries where it has strained relations, such as Venezuela or Yemen.

But in those countries, the U.S. provides funding to aid organizations working there rather than payments directly to the government. In the case of Afghanistan, Congress appropriates billions of dollars in direct government aid.

Now that a designated terrorist group is in charge of the government, U.S. officials are prohibited from transferring funds to the Afghan government in the absence of a new U.S. license. Given the Biden administration's profound disagreements with the Taliban, it has to determine what aid it is willing to continue. However, the administration has been explicit that it does not yet recognize the Taliban as the official government of Afghanistan, which may mean the sanctions do not yet affect funding for the Afghan government.

"I don't want to get into hypotheticals, but I would point out that there are a range of different diplomatic relationships the United States has with countries around the world, including some in very difficult or nonexistent relationships with governments where we still provide forms of aid to people," Sullivan said. "And I will leave it at that, because we're not at a point yet where we can speak directly to how things will play out in Afghanistan."

The European Union's foreign affairs chief, Josep Borrell, on Thursday called the fall of Afghanistan's capital and the resurgence of the Taliban "a catastrophe" and "nightmare" that laid bare a failure of intelligence and trans-Atlantic cooperation.

Borrell further criticized Biden for underplaying the commitment to nation-building in Afghanistan. Borrell insisted that instilling the rule of law and achieving basic rights for women and minorities were goals of the Western military intervention in the country, along with the initial goal of stamping out terrorism emanating from the region.

"State-building was not the purpose? Well, this is arguable," Borrell said of Biden's stance, which has come under criticism in much of Europe.

Borrell also criticized intelligence agencies for failing to anticipate the collapse of the Afghan force in almost days instead of months.

"Where [was] our intelligence in order to have a clear look at what was going to happen? Nobody was expecting it. I don't even [think] the Taliban were expecting it," he said.

A major strategic task lies ahead, he said.

"What we cannot do is to let the Chinese and Russians to take control of the situation," Borrell said. "We could become irrelevant."

China and Russia have both issued warm statements about the Taliban in recent days but have stopped short of formally recognizing its rule.

Borrell, said the EU would open a channel of communication with the Taliban but stop short of recognition. "The Taliban have won the war, so we will have to talk with them," he said.

Borrell said 106 staff members of EU delegations and their families had safely left Afghanistan and landed in Madrid, while at least 300 remain behind.

Many Europeans remarked that Biden's assertion that, "our only vital national interest in Afghanistan remains today what it has always been: preventing a terrorist attack on American homeland," could have come from a speech by former President Donald Trump.

EU Council President Charles Michel underscored the different stances when he said in a tweet Thursday that the "rights of Afghanis, notably women & girls, will remain our key concern: all EU instruments to support them should be used."

French Parliamentarian Nathalie Loiseau, a former Europe minister for President Emmanuel Macron, put it more bluntly: "We lived a little bit the great illusion," she said. "We thought America was back, while in fact, America withdraws."

It was no better in Germany, where a leading member of German Chancellor Angela Merkel's center-right Union bloc, Bavaria Gov. Markus Soeder, called on Washington to provide funding and shelter to those fleeing Afghanistan, since "the United States of America bear the main responsibility for the current situation."

Even in the United Kingdom, which has always prided itself on a its "special relationship" with Washington and now, more than ever, needs U.S. goodwill to overcome the impact of leaving the EU, barbs were coming from all angles.

Former British army chief Richard Dannatt said, "the manner and timing of the Afghan collapse is the direct result of President Biden's decision to withdraw all U.S. forces from Afghanistan by the 20th anniversary of 9/11."

"At a stroke, he has undermined the patient and painstaking work of the last five, 10, 15 years to build up governance in Afghanistan, develop its economy, transform its civil society and build up its security forces," Dannatt said Wednesday in Parliament.

"The people had a glimpse of a better life -- but that has been torn away."

Biden putting much of the blame on Afghan forces for not protecting their nation has not gone down well with Western allies, either.

"To see their commander in chief call into question the courage of men I fought with, to claim that they ran, is shameful," Tugendhat said.

Chris Bryant, from the opposition Labor Party, called Biden's remarks about Afghan soldiers, "some of the most shameful comments ever from an American president."

In Prague this week, Czech President Milos Zeman said that, "by withdrawing from Afghanistan, the Americans have lost their status of global leader."