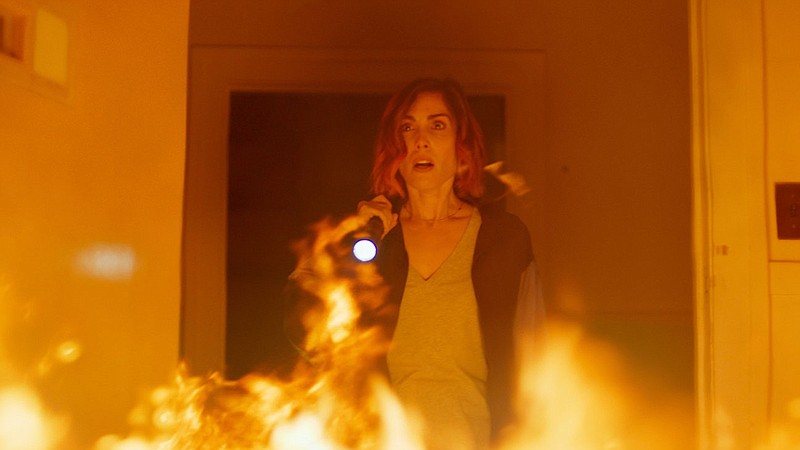 Carly (Carly Pope) is haunted by nightmares in Neill Blomkamp’s horror film “Demonic,” which was shot last year at the height of covid-19 pandemic.

South African filmmaker Neill Blomkamp made quite the memorable splash with his 2009 debut film "District 9." The heady and perceptive sci-fi thriller set itself in an alternate 1982 and explored themes of xenophobia, class and income inequality. In addition to being a box office success, "District 9" was well-received by critics and it went on to earn four Academy Award nominations.

Blomkamp's next two films "Elysium" (2013) and "Chappie" (2015) didn't strike the same chord, but both were built around big ideas and were visually interesting. Also, both took special aim at specific social ills while highlighting the ugly side of humanity.

Now Blomkamp is back with "Demonic," his first feature film in six years and one that sees him dipping his toes into a new genre. This low-budget and self-financed horror project was written in two months and shot over 24 days in British Columbia right in the middle of the covid-19 pandemic. You have to appreciate the filmmaker's ambition in crafting his own unique vision and bringing it to life on screen. That's not easy, especially when you're funding it yourself.

Unfortunately "Demonic" ends up being a dry and toothless horror experience; one that's never as captivating as it could be or as chilling as it needs to be. The mostly scare-free story introduces plenty of fun and crazy ideas, but it never fully embraces the sheer nuttiness that it teases. So we end up with a movie that can't quite muster the frights and that isn't willing to let loose and go full gonzo.

The story centers around Carly (Carly Pope), a woman haunted by nightmares of her incarcerated mother Angela (Nathalie Boltt) who she hasn't spoken to in nearly two decades. Out of the blue, Carly is contacted by her former best friend Martin (Chris William Martin) who wants to meet up. Martin is a bit of a crackpot; the kind of guy who pushes theories about demon gateways and Vatican-funded demon-hunting black-ops units (like I said – sheer nuttiness).

Martin reveals to Carly that her estranged mother is in a coma and is part of an experimental study run by a medical company called Therapol. Carly is invited to Therapol by a corporate suit and ambiguous "physician" named Michael (Micheal J. Rogers). Once there, he and the company's head researcher Daniel (Terry Chen) let her in on the cutting-edge work they're doing.

It turns out Therapol has developed a technology that allows them to enter a comatose person's subconscious and communicate with them. Their "goal," Carly is told, is to alleviate suffering in patients. But can you ever really trust big companies in movies like this? It seems that during their most recent simulations Angela has been calling for her daughter. So they convince Carly to let them send her into Angela's mind where she quickly learns that it may not be her tortured mom doing the calling. It might be something much more sinister and (wait for it ...) demonic.

For the scenes inside the mom's head Blomkamp uses a nifty technology called volumetric capture. Thanks to Google I learned that it's a technique that captures and digitizes a three dimensional target, in this case actress Carly Pope. Once digitized the target/Pope can be transferred into a virtual world. The results in the movie are more intriguing than effective. The digitized Carly resembles a low-res video game character and the first-person, third-person and isometric perspectives Blomkamp uses seem video-game inspired. Again, the tech is cool to look at, but it adds nothing memorable or effective to the movie.

Things aren't much better outside of the simulation and the budget constraints are hard to miss, especially in the final act. With the exception of some clever lighting, we're ushered through the surprisingly unremarkable finale without any eye-catching visual touches to speak of. It's much the same with the fizzling story as Blomkamp tries to bring everything to an exciting crescendo but instead lands it with an uneventful thud.

So what we're left with is a bewildering movie -- one with demons and possessions but not a scare to be found. One with goofy stuff like militarized Catholic exorcism squads and an ancient weapon called "The Holy Lance" yet it can't squeeze out a single laugh. Pope does everything she can to bring energy and heart to the sputtering story. But the film's problems end up being more than any one actor can overcome.

It's really a shame because "Demonic" is the kind of movie you want to root for -- a small intimate film made well outside of the big studio machine. But there is only so much you can look past and at some point the movie has to start delivering on its early promises. Sadly, "Demonic" never does.

Rating: R, for language, some violence, and bloody images