No heroes in 'The Witcher: Nightmare of the Wolf' 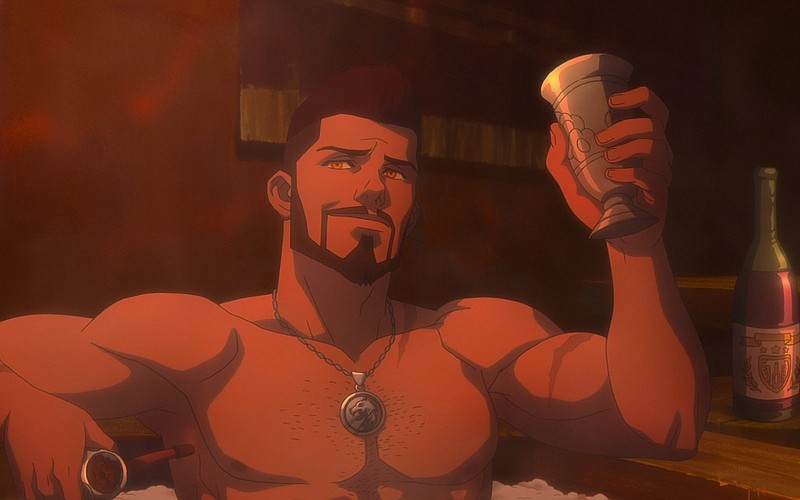 Monster-dissuader-for-hire Vesemir (voiced by Theo James) slaughters a lot of animated baddies in the new Netflix movie “The Witcher: Nightmare of the Wolf.”

While fans of Netflix's "The Witcher" series eagerly await December for season two, the streaming service has a new movie to tide them over. It's called "The Witcher: Nightmare of the Wolf," and fans of the series will be pleased.

As for newcomers looking for a jumping in point to the series, this movie probably ain't for you.

"The Witcher" franchise has really grown in popularity over the last few years, starting with the release of "The Witcher 3: Wild Hunt" video game for Xbox One and Playstation 4. That game ended up being an anniversary present from my wife, and I loved it.

One of the great things about "The Witcher" franchise is it has so many jumping in points. There's the original book series by Andrzej Sapkowski, the even more popular video game franchise (which has sold more than 50 million copies), or the Netflix series starring Henry Cavill, which debuted right before covid-19 hit. There's also a Polish film called "The Hexer."

"The Witcher: Nightmare of the Wolf" is an animated film that serves as a prequel/spinoff of sorts for the live-action Netflix series with Cavill. It's 81 minutes long and focuses on the back story of a character that'll appear in season two of the forthcoming series. But fans of the novels and/or video games will already know Vesemir.

For those unfamiliar, the world of The Witcher is a medieval-like fantasy series set in a grim world full of monsters. It's a cynical and dark series where, in most cases, the only way to protect your loved ones facing a monstrous threat is to hire a witcher. Witchers are monster hunters, humans mutated through strange magic and potions to gain extra abilities. They've got a little magic, enhanced senses, greater strength, faster healing, slowed aging and more.

The process is painful and kills most of the young boys who undergo the transformation and trials. It's meant to be horrific and teach audiences the only way for monster hunters to kill monsters is to become like them in some ways.

There are no obvious heroes in the world of "The Witcher." If you don't have coin to hire a witcher, you're fresh out of luck, because they don't do charity. It's a point Vesemir (Theo James) makes early on in the film.

The story begins with a father traveling through a forest with his kids when they stop for a potty break. "The Witcher" immediately shows audiences it's going to be a mature film filled with blood and gore, even a little nudity in one scene. The family is quickly slaughtered by a horrific monster, and as the only surviving child is about to be killed, Vesemir shows up to kill the beast.

The witcher dispatches his foe and saves the boy but then turns to leave, ready to collect his coin for killing the beast. As the boy informs Vesemir that he's of noble blood, and the witcher can't just abandon him, our protagonist just turns and smiles. We soon learn Vesemir did abandon the boy, telling him to practice his sad face so a traveling merchant or someone else coming down the road might give him a ride home.

"The Witcher" sets a tone right off the bat that there are no heroes in the movie, just witchers motivated by coin and those in the world who fear and hate them.

I'm not joking when I say even at the film's climax I found myself turning to Meghan and saying, "I don't know who to root for."

Vesemir isn't an evil guy, but he is entirely selfish. As he takes a warm bath and treats himself to booze and fresh fruit with the money he earned, Vesemir speaks with an elf to translate a phrase the monster spoke just before death. When the translator informs Vesemir that elvish girls have been disappearing and asks for his help to find them, the witcher shrugs his shoulders. There's no money to be had, so he's not interested in "elvish drama."

ALL GUTS, NO GLORY

It's a constant theme in the Witcher universe, large quantities of suffering, usually at the hands of monsters or evil wielders of magic. Once in a while a witcher might come along and accomplish something good, but they won't look pretty doing it, and it's almost never an act of charity. The world is filled with hatred, and the only reasons witchers are tolerated is because they do kill monsters others can't. Yet even this service earns them no adoring fans or gratitude.

The main antagonist for this film is a sorceress named Tetra (Lara Pulver), who urges the local ruler to drive the witchers out of their nearby fortress. She isn't a hero, but Tetra does have her own reason for hating witchers.

You'd be surprised how much story "The Witcher" is able to weave together in 81 minutes. Interspersed through the film are scenes of young Vesemir, a poor servant who barely gets enough to eat and dreams of going off on adventures. When he meets a witcher named Deglan (Graham McTavish), the boy decides he, too, wants to be a witcher, and finds his way to Kaer Morhen (fortress of the witchers).

He enters with a group of boys who are also training to become witchers, and the pain they undergo through magic and mutations is unspeakable. The film does a great job of showing the cost Vesemir pays for strength to go out adventuring and surviving in the world. And while he's a cheeky S.O.B. as an adult and a powerful fighter, underneath is a hollow boy who might sometimes wish he'd stayed at home with his father and childhood crush.

One of the strengths of "The Witcher" video games is the rustic and beautiful soundtrack that plays as you explore the large fantasy world, killing monsters. "The Witcher: Nightmare of the Wolf" does a great job supplying the same level of audio excellence throughout the movie. It feels at times like the music has been cherry-picked from the game.

Studio Mir handled the animation for this film, and it's pretty good. The action is fluid and smooth, the character designs are mystical, and the monsters look spooky. It's everything you'd want from a Witcher movie.

I was tickled to learn Studio Mir also handled animation for "Legend of Korra," which is the sequel to the critically acclaimed "Avatar: The Last Airbender" cartoon. Korra had a great deal of fighting and action, and I always thought Studio Mir did a fantastic job with all of the combat and raw elements being wielded by martial artists.

The story in "The Witcher" might not make sense if you haven't seen the series, read the books or played the games. It's not extremely accessible to newcomers. But that often seems to be the trade-off for projects like this.

Do the creators make something more generalized for new audiences to come in and risk alienating the longtime fans, or do they craft a film or series that pleases traditional fans and isn't quite as accessible for newcomers? This film seems to have chosen the latter, and I'm OK with that. But I also loved the games and Netflix series (not the books, though).

If you're already a Witcher fan, you'll probably enjoy this movie. If you're new, well ... there are worse ways to spend 81 minutes of your life.

Netflix will release "The Witcher: Nightmare of the Wolf" on Monday. Hopefully it'll tide you over until season two starts come winter.

Print Headline: No heroes in 'The Witcher: Nightmare of the Wolf'