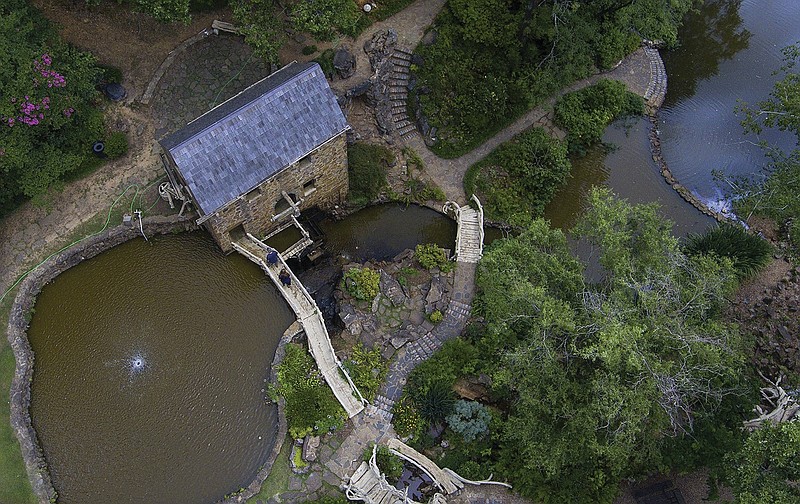 The Old Mill in North Little Rock is shown in this July 16, 2021, file photo. A waterfall in the park had collapsed the previous September. (Arkansas Democrat-Gazette/Staton Breidenthal)

The Old Mill is back to working in full, nonfunctioning order.

A 19th-century replica mill that was the brainchild of a depression-era real estate developer has been North Little Rock's postcard landmark for almost a century, but in September a waterfall in the park collapsed. While T.R. Pugh Memorial Park -- where the Old Mill is located -- remained open, the waterfall was in need of a rebuild.

Now, after some planning and a bit of stone masonry, North Little Rock's biggest draw looks ready for the silver screen again. City officials held an open house ceremony Thursday for the waterfall, complete with a ribbon-cutting ceremony where Mayor Terry Hartwick christened the new installation with a giant pair of scissors.

Restoration work for the cascading stone waterfall took about 100 days and cost the city about $180,000, according to Chris Wilbourn, North Little Rock city engineer. The waterfall collapse was likely due to water pressure.

The waterfall sits against a dam and over the years water pressure likely eroded the mortar, causing the stones to give out, Wilbourn said.

"The structure had collapsed basically from probably water pressure and all of that," Wilbourn said.

As part of the restoration, workers fortified the dam with a concrete retaining wall behind the waterfall.

For Bert Turner, the park is a labor of love as the nonprofit organization he runs, Friends of the Old Mill, assists with its upkeep.

For much of the 90 years the Old Mill has been around, it's been a key attraction for the city. Constructed in the 1930s by real estate developer Justin Matthews, it was built as a rustic centerpiece with a two-story mill, benches and bridges designed by Mexican artist Dionicio Rodriguez for a new suburban development.

Turner said Matthews' idea was that the Old Mill would harken back to Arkansas' early 19th-century pioneer roots.

"It was supposed to really be a symbol for this entire neighborhood out here," Turner said. "Everybody loves this."

Shortly after it was finished, the Old Mill caught the eyes of filmmakers at Selznick Studios who were looking for rustic pieces to help set the stage for "the Old South" in their new movie "Gone With the Wind."

While the Old Mill only got perhaps five seconds of screen time in the film's opening credits, notoriety from the film has enticed tourists looking for a photogenic backdrop ever since.

For others the Old Mill has served as a picturesque wedding venue and an education tool for early 19th-century life for many schools.

Completed in 1933, the Old Mill never functioned as a working mill. Rushing water may turn the wheel, but the mill isn't grinding anything, nor has it ever.

While the waterfall was authentic, powered by gravity, it is now powered by a pump that takes water from Lake Number Two. But even with some modern upgrades the rustic sites and sounds that harken people back to another century are still the main draw.

"It's beautiful," Turner said. "It is just extremely attractive."