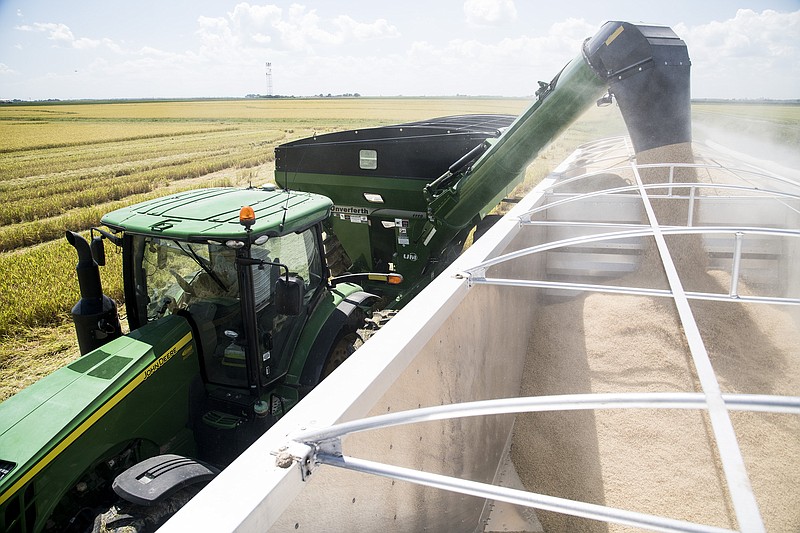 The 2020 rice harvest is underway in Arkansas County in this file photo. (Special to The Commercial/Fred Miller, University of Arkansas System Division of Agriculture)

The covid-19 pandemic created a spike in global rice prices in the second quarter of 2020, according to a new University of Arkansas System Division of Agriculture report.

Since then, rice prices have remained higher than expected despite ample rice stocks and a record 2020 global rice production.

"Most commodity prices went down during the pandemic because of lower demand," said Alvaro Durand-Morat, assistant professor of agricultural economics and agribusiness for the Arkansas Agricultural Experiment Station, the Division of Agriculture's research arm. "But rice went the other way."

"The importance of our report is the international view of the rice markets. It is one of the few international outlooks out there," Durand-Morat said. "It's essential from a policy standpoint for farm bills and trade negotiations for a crop like rice where half of it is exported. What happens with our trading partners affects us directly."

Arkansas is the nation's leading rice growing state, producing more than 40% of the U.S. rice crop, bringing in around $1 billion per year in cash farm receipts, according to the 2020 Arkansas Agriculture Profile, published by the Division of Agriculture and available for download: https://bit.ly/AAES-AgProfile2020.

Arkansas is also the nation's leading rice exporter, accounting for about half of all rice from the U.S., Durand-Morat said.

Because of pandemic concerns in some leading rice-exporting countries, rice prices surged when other commodities declined, Durand-Morat said.

"Large exporting countries like Vietnam, India and [Burma] reduced exports to see how they would fare during the pandemic," Durand-Morat said. "They wanted to secure the domestic supply. Vietnam actually banned exports for a couple of months."

By August 2020, Durand-Morat said, prices of all commodities began to go up. "Some went up really high.

"Rice prices are still high, though lower than the peak months of the covid-19 lockdowns," he said. "But they are still higher than pre-covid. This is despite global rice supplies being high."

"We project global rice production will surpass global rice consumption for most of the coming decade, with a small deficit developing by the end of the projected period," Durand-Morat said.

Durand-Morat expects rice production to grow despite a decline in rice acres by 2028-2030. The production gains will be exclusively because of improvements in yields. Global rice consumption will also rise based only on population growth while per-capita consumption of rice stagnates.

"The international prices of long-grain and medium-grain rice is projected to increase nominally," Durand-Morat said. "But they will decrease in real terms -- because of inflation and ample rice supplies."

The world rice production and consumption map is likely to change over the next decade, Durand-Morat said.

"At the country level, rice production is projected to decrease in China, South Korea and Brazil, and grow the most in Tanzania, Madagascar, Egypt and Nigeria," Durand-Morat said.

"Total rice consumption is projected to decline in Japan, South Korea and Brazil," he said. "It will increase strongly in Iran, Madagascar and Nigeria. These increases will support fast growth in regional production and imports."

Rice consumption is going up in Africa, Durand-Morat said, because of a combination of population growth outpacing production and investment in research and development by USAID, Japan and other countries.

"They discovered rice, and they love it," Durand-Morat said. "When people move to the city, they eat more rice because it's easier to prepare than a native staple like casava."

"These differential changes in production and consumption across countries will push global rice trade to new records," Durand-Morat said.

Durand-Morat said the global rice market is subject to many factors that could alter projections.

"The key factors to watch will be China's rice stock management, India's yield and overall production trend, and the price gap between Asian and American long-grain rice," Durand-Morat said.

"We get great support from the Rice Board," he said.

The publication is researched and developed in collaboration with FAPRI, the Food and Agriculture Policy Research Institute based at the University of Missouri.

"FAPRI uses U.S. rice numbers that come from us to build their U.S. models," Durand-Morat said. "What we do is couple our model with the FAPRI models to develop projections for international markets."