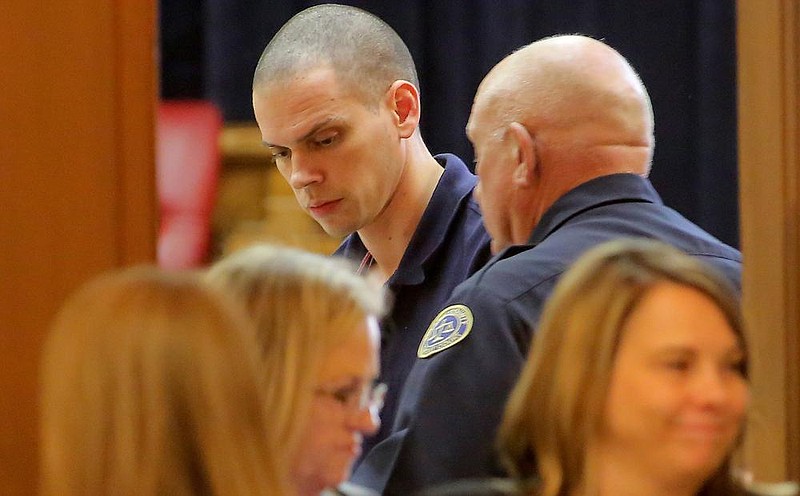 FILE — Arron Lewis, top left, stands to be escorted from the courtroom during a lunch break in his his capital murder and kidnapping trial Thursday at the Pulaski County Courthouse in Little Rock in this Jan. 14, 2016 file photo. (Arkansas Democrat-Gazette staff photo)

The man convicted of killing a Little Rock real estate agent won't be permitted to call any witnesses but himself in next week's trial over whether he was assaulted by state prison guards in 2016, a federal judge ruled Friday.

Arron Lewis, 40, of Jacksonville, who is serving two life sentences without possibility of parole for the 2014 kidnapping and murder of Beverly Carter, sued then-Arkansas Department of Corrections Director Wendy Kelley, Capt. Mark Stephens and Sgt. Hazel Robinson in U.S. District Court in 2018.

Kelley and Stephens were dropped from the civil-rights suit earlier this month, leaving Robinson as the sole defendant.

After a pretrial hearing before U.S. District Judge Billy Roy Wilson, Lewis, who is representing himself, was left with no witnesses to testify to his claim that Robinson punched him in his left shoulder as he was being escorted to prison sick call at the Varner Supermax Unit in June 2016. Lewis said he was being seen at sick call for a dislocated left shoulder and was left in severe pain.

A second officer, Cpl. Jarius Sanders, who was assisting Robinson in escorting Lewis to sick call, said in an affidavit, dated July 14, 2021, that he did not witness the alleged assault.

Robinson and Sanders are both expected to testify in Robinson's defense in the civil trial set to begin Tuesday.

Wilson excluded 10 of Lewis' witnesses because none had any direct knowledge of the matter, making their testimony irrelevant. The only witness he did not exclude was Lewis himself.

All 10 witnesses were prison personnel who investigated the grievance that Lewis filed against Robinson, but they had no direct knowledge of the incident beyond that.

"It's going to come down to my testimony, which you've already deemed is not credible, against two officers who I can't provide any supporting evidence to," Lewis complained. "I guess my whole list will have to be excluded except for myself."

At the outset of the hearing, Wilson addressed a complaint Lewis had lodged regarding a recent transfer from the Tucker Maximum Security Unit in Jefferson County to Brickeys. Lewis told Wilson that after the move he had discovered a number of materials he needed for the trial had disappeared.

"The morning I was transferred, they just came to my cell, I was about to use the phone, and they told me come with them," Lewis said. "They didn't tell me I was being transferred or anything."

Lewis said he was left in a visitation cell while the contents of his cell were packed for transport.

"They left numerous things," he said. "My address book, my hearing aid, numerous notes that I had for court. I had all of my docket entries and my notes that I had written out for this case, and half of that stuff is gone. It was a subversive attempt to do whatever they do instead of just telling me, 'Hey, you're transferred. Pack all of your stuff up.'"

Wilson noted that an internal email, sent between prison officials and copied to Robinson's attorney, Vincent France, indicated that photos of Lewis' property had been taken before shipment. The email said the photo record was included because of Lewis' past claims about property disappearing after a transfer.

France, who along with William Bird is representing Robinson, said documentation was provided regarding all of the property that was transferred and that the property was inventoried in Lewis' presence.

"We included documentation from the officer at Tucker who went through the property while Mr. Lewis was present," France said. "He never said anything was missing."

Lewis argued that no inventory was provided of his legal materials; France said this was because those materials were not examined.

"They're not holding anything back that I can determine," Wilson said.

Lewis was sentenced to two life terms after being found guilty in January 2016 of capital murder and kidnapping in connection with the September 2014 death of Carter, whom he lured to a vacant home in Scott on the pretext of being interested in buying it.

At his trial, prosecutors said Carter, a married mother of three, died in agony and terror as she suffocated under green tape that Lewis had wrapped across her face after his and his wife's plans to hold her for ransom fell apart.

Lewis' wife, Crystal Lowery, testified against Lewis in exchange for leniency. She is serving a 30-year sentence for her part in the murder.

Information for this article was contributed by John Lynch of the Arkansas Democrat-Gazette.

Print Headline: Inmate is left with no witnesses