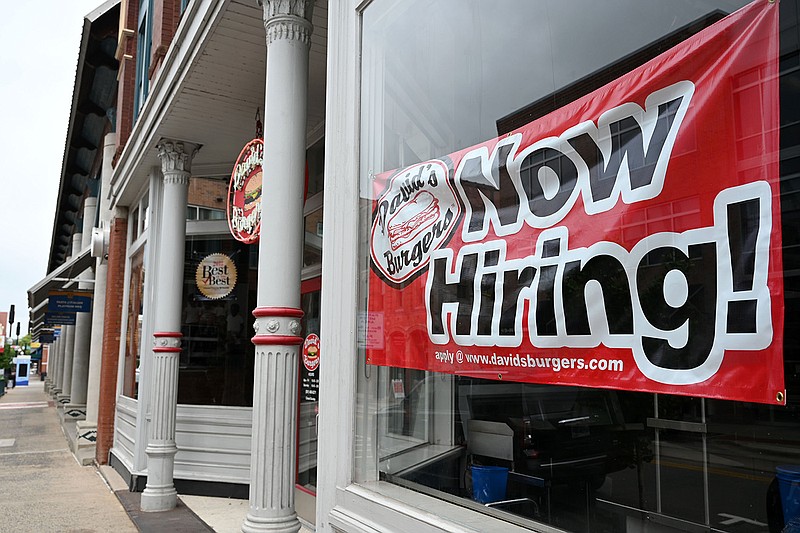 A sign Friday at David’s Burgers in Little Rock’s River Market District announces job openings while another sign says that the outlet is temporarily closed because of a shortage of workers. (Arkansas Democrat-Gazette/Stephen Swofford)

Friday's announcement is a sign that joblessness in the state has improved and remains relatively stable. Statewide unemployment has remained at or below 4.6% this year after spiking to 10% in April 2020 when the pandemic began ravaging the economy, businesses were forced to close and thousands of workers were laid off.

Now, businesses across Arkansas are closing or reducing hours for an entirely different reason -- they can't persuade workers to fill job openings. Expansion efforts may be reevaluated, and recruitment of new businesses to the state is being hampered by declines in the labor force, officials say.

"We've experienced a shortage of workers for quite some time but we were able to augment our staff with high school and college workers, but now they're going back to school," Bubbus said. "We just haven't been able to reload. I'm hoping the labor force will come back like it was before, but it's an obvious concern for our business."

That's a decline of more than 7,000, a trend that has economic development officials on edge.

"This is a terrifying situation to think about, and it's certainly not a unique situation for the hospitality and restaurant industry," Preston said of businesses like David's Burgers closing simply because of staffing troubles. "Businesses are either closing or they're having to adjust their hours."

Multiple businesses and industries across the state are weathering staffing difficulties, Preston said. "This is not a demand issue -- people have been pent up and they're ready to go out," he said. "We're seeing this issue because businesses can't find workers. It's frightening."

The labor force reflects the number of Arkansans who are actively seeking work. There are multiple factors that could contribute to the decline: Arkansans who are on unemployment benefits and not seeking work, employees who have retired or workers who were in one career and have opened their own businesses, for example.

"This is unlike anything I've ever seen," Jay Chesshir, chamber president and chief executive officer, said, referring to the volume of jobs available and the scarcity of workers available to fill them. Chesshir has been involved in business expansion and recruitment efforts for nearly 30 years.

He noted that the labor force decline takes on more significance when accounting for population growth revealed in the 2020 census data.

Arkansas' population grew by 95,606 or 3.3%, and growth was even stronger in key metropolitan statistical areas like Little Rock and the Fayetteville-Springdale-Bentonville corridor. "You would think the labor force would grow with the population," Chesshir said. "The growth we're seeing in our core [Little Rock] MSA has not yet been reflected in the labor force."

Jobless workers may be restrained from returning to the job by health concerns related to covid and the delta variant while others may be content with the unemployment benefits they are still receiving, he said.

In any case, the dwindling labor force is a major concern, Chesshir said, pointing to the decline of more than 7,000 workers in the labor force since July 2019. "With the population growth that we've had, you would think we certainly would go beyond where we were in 2019," he added. "We're seeing employee shortages all across the economic spectrum."

Labor-force shortages also threaten business recruiting efforts, Chesshir said. "The issue is front and center in every project that we work, whether it be an existing company looking to expand or a new company looking to locate," he said.

In Northwest Arkansas, small businesses are scrambling to adjust to the worker shortage. Restaurants and retailers, especially, are struggling to adapt, according to Mary Beth Brooks, director of the Arkansas Small Business and Technology Development Center at the University of Arkansas.

Wages in the area have increased from the $10-$12 an hour range to upward of $15 per hour. Restaurants that traditionally would be open six or seven days a week are now moving to a Wednesday-Saturday schedule. Businesses, including area banks, are offering hiring and retention bonuses to bring workers on board and keep them on the job.

"This is a real hot-button issue in Northwest Arkansas," Brooks said Friday of the labor force shortage. "We deal with this every single day working with small businesses. It is their top ongoing concern and chief complaint."

The organization, which provides mentoring and support services to small businesses, has been holding a weekly meeting with business owners and operators since the pandemic began last year. Hiring difficulties have been a topic brought up at nearly every meeting, Brooks said.

Businesses can't get applicants to show up for interviews. "They'll have 10 interviews lined up and not a single one will even show up," Brooks said.

One byproduct of the labor shortage is reflected in an increased demand for employment agencies, officials say. The state's unemployment news release Friday noted that the administrative and support services subsector, which includes employment agencies, added 10,600 jobs over the past year.

Staffing agencies provide much-needed support for businesses grappling with hiring troubles, Chesshir said. "Companies that have never had to turn to those types of services are doing so now because they don't know where else to turn," he added. "But I also think it's a reflection of the workforce in so much as people wanting to search for a better opportunity than what they had."

With so many job openings, potential workers may be relying on staffing or search agencies to help them find the right job. "They want to have the opportunity to try new things and land the job that they're most interested in for their career," Chesshir said.

"With an employment agency, you can be in one job one week and in a completely different job the next week," Chesshir said. "It becomes an experiential workforce opportunity for you to determine what you might want to do next as opposed to what you were doing."

"Our unemployment rate continues to be significantly below the national rate, and the fact that unemployment is now down to 4.3% reflects a growing economy in the state," Gov. Asa Hutchinson said in a statement released Friday. "The job opportunities are abundant with virtually every employer in Arkansas needing more workers.

"The challenge is the number of Arkansans who have not returned to the labor force after they lost a job early in the pandemic," the statement said. "There is a constant need to increase the number of workers in order to keep our economy vibrant."

Michael Pakko, chief state economist at the Arkansas Economic Development Institute in Little Rock, noted that the state seems to have hit a wall in working to lower the unemployment rate.

"Recovery of Arkansas' labor markets is continuing at a snail's pace," Pakko said. "The past few months have been a slow slog back to normal."

The largest decline was in government employment, down 10,600 jobs, mainly because teachers and school staffs were on summer vacation. Construction jobs fell by 1,600, and trade, transportation and utilities declined by 2,200. Food services dropped 800 jobs.

On the plus side, financial services added 1,100 jobs, and manufacturing grew by 300 jobs.

Meanwhile, employers like Bubbus at David's Burgers are looking to their future expansion plans with some anxiety. The company is adding a new restaurant in Hot Springs in the next 45 days and plans to open its first chicken-focused restaurant, Jess'sChicken, in the next 90 days.

"There's definitely some fear there about finding enough staff," Bubbus said. "But we're trying to remain optimistic that things will come back."