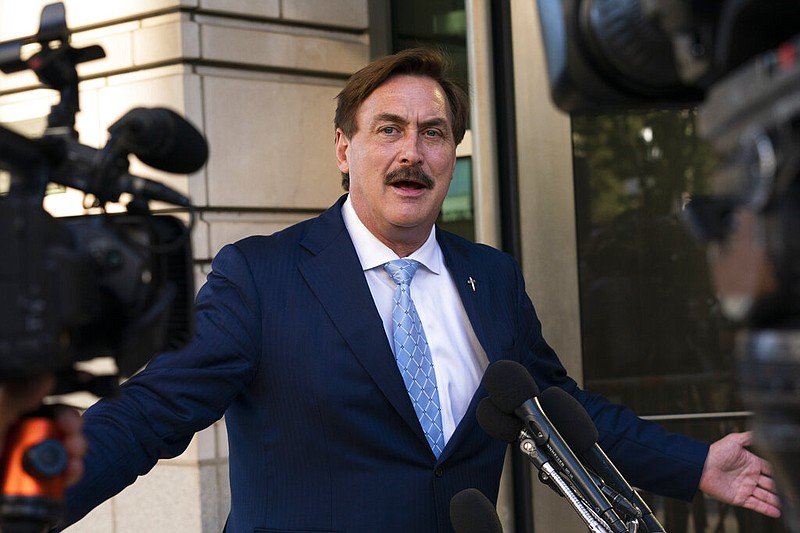 But Thurston's Republican challenger, Rep. Mark Lowery of Maumelle, said he doesn't believe state resources should have been used to attend the symposium.

Lindell, founder and chief executive officer of My Pillow Inc., has promoted former President Donald Trump's unsubstantiated allegations of widespread voter fraud in the 2020 election that Trump lost to President Joe Biden. Trump is a Republican. Biden is a Democrat.

Last week, a federal judge cleared the way for a defamation case by Dominion Voting Systems to proceed against Sidney Powell, Rudy Giuliani and Lindell -- allies of Trump who all had falsely accused the company of rigging the presidential election.

Nearly all the legal challenges from Trump and his allies were dismissed by judges, including two by the U.S. Supreme Court. A range of election officials across the country, including Trump's attorney general, William Barr, have confirmed there was no widespread fraud in the election. Republican governors in Arizona and Georgia, key battleground states crucial to Biden's victory, also vouched for the integrity of the elections in their states.

Chris Powell said in a written statement that he attended the symposium in Sioux Falls, S.D., from Aug. 10-12 because in the weeks and months leading up to the event, "the Secretary had numerous concerned constituents reach out and request that our office attend the conference."

"Mike Lindell's organization invited elected officials, media and cybersecurity professionals from all states to attend," Powell said in response to the Arkansas Democrat-Gazette's query about who invited him to the symposium.

Asked what he learned at the symposium, Powell said, "A mix of information was presented demonstrating different types of data analysis on the 2020 elections as well as historical election analysis."

Asked whether Thurston agrees with Lindell's claims that the 2020 election was rigged, Powell said that election processes and procedures vary from state to state, "therefore the Secretary feels that it would be inappropriate for him to comment on elections results of other states."

"The Secretary remains confident that the 2020 Election in Arkansas was secure and accurate," he said in his written statement.

Asked about how much state money was spent on attending the symposium, Powell said airfare and hotel expenses were $1,087.49. He said he flew to the symposium Aug. 9 and returned home Aug. 12.

Lowery said he's not surprised that Thurston sent an aide to attend Lindell's symposium, but he doesn't believe state resources should have been used to attend the event.

Lindell is partisan and "I think all voices should be heard," Lowery said, adding a more balanced discussion would be more appropriate.

Asked whether he agreed with Lindell the 2020 election was rigged, Lowery said, "I really can't give an opinion to the deep dive that he is doing."

Lowery said he is doing his own research and talking with cybersecurity experts and studying the issue of election security and integrity in Arkansas.

Asked to respond to Lowery's comments, Powell said Friday, "I would just refer you to the answers we submitted earlier."

Lea wrote in an email to this newspaper: "Never heard of it!"

Thurston is an East End Republican who has served as a low-profile secretary of state since 2019.

Nearly two months ago, Lowery announced his challenge of Thurston in the May primary election.

Last month, former Pulaski County Election Commissioner Josh Price of Maumelle announced his bid for the Democratic nomination for secretary of state in 2022.

Print Headline: Tab for travel to S.D. paid by state