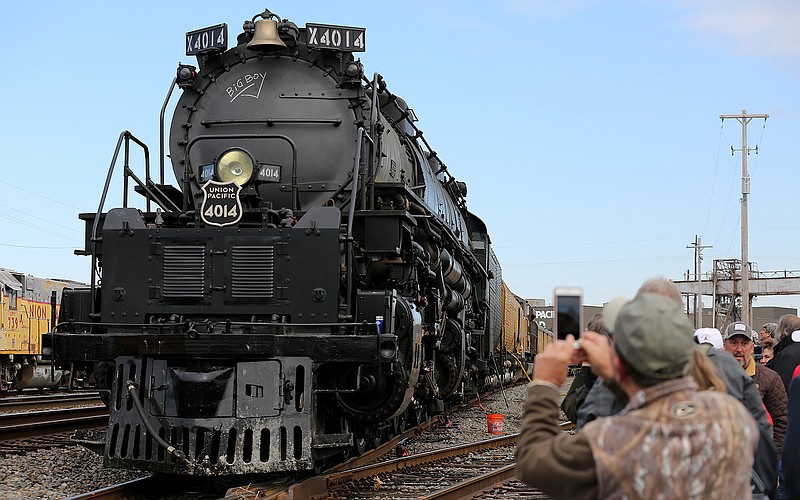 It's big, it's famous, and it's back from the dead.

The appropriately named steam locomotive, Big Boy No. 4014, will make its second journey through Arkansas this week.

While Union Pacific toured its resurrected steam locomotive two years ago, it's in the midst of its second long-distance journey after being restored.

The rarity and excitement of seeing a working steam engine -- literally with all its bells and whistles -- is difficult for many train enthusiasts to describe. There are only eight of the 80-year-old steam locomotives left. Big Boy No. 4014 is the only one that hasn't been turned into scrap metal or a museum display piece.

That makes each stop the locomotive makes along its 4,000-mile journey across 10 states a must-see for model train hobbyists and historians.

[Video not showing up above? Click here to watch » arkansasonline.com/822bigboy/]

"It's such a unique experience to see one running, you know, that a lot of people thought were dead -- dead and gone," said Cheri Neil, an operations director at the Museum of the American Railroad in Frisco, Texas.

This week the train will chug its way diagonally across Arkansas, making 10 stops from Texarkana in Southwest Arkansas to Walnut Ridge in Northeast Arkansas. On Thursday, the train will pull into Union Pacific's facilities in North Little Rock where it will overnight for some scheduled maintenance.

Along the way, rail fans from all over await the locomotive's arrival. For the non-initiated, the cultlike following for a historic locomotive may be puzzling, but for rail fans from around the world it represents everything that made them love trains.

The locomotive is 132 feet long and weighs about 1.2 million pounds. Simply put in laymen's terms -- it's huge.

Their size, their strength and nostalgia is why people line the Union Pacific railroads to get a brief glimpse of the historic locomotives, said Neil who made the trip to Texarkana in 2019 to see Big Boy No. 4014 in action.

Big Boys were the last of their kind, capping over a century when steam locomotives dominated continental transportation and bound the nation together.

Built in 1941, the 25 Big Boys commissioned by Union Pacific were one of the last steam locomotives built before diesel engines made them obsolete. Big Boys were the peak of what mid-20th century engineers could do with steam power -- they were massive, loud and could haul just about anything.

But just over a decade later most of them were headed for the scrap yard.

For Union Pacific, the six-year process to locate, purchase and fully restore one of their old locomotives was arduous but worth it for the sake of "honoring the history of the railroad," according to Union Pacific spokesperson Robynn Tysver.

"You know railroads are kind of in the background of our lives," Tysver said. "But they're transporting goods and services, and stocking shelves from the big-box stores to grocery stores all over this country. Big Boy is a historical reminder of how far this industry has come in the last 80 years."

When the historic locomotive pulls into North Little Rock midafternoon Thursday, the steam engine also will be paying homage to a city built by railroads.

While Little Rock was incorporated as a city in 1831, the swampy marshlands just across the Arkansas River were not prime real estate yet.

In the 1850s, a railroad depot opposite Little Rock was constructed but soon was abandoned after the Civil War.

"There wasn't a city over here, on the north side, until the railroad industry started building," Bradburn said.

Over the decades, railroad companies consolidated, went bankrupt and bought one another out. Left standing today is Union Pacific, which has a major repair shop in the city, making it an ideal place to host the historic locomotive overnight.

At the Museum of the American Railroad, people from all around the world come to see the museum's decommissioned Big Boy locomotive, Neil said. Whether someone can cite the steam locomotive's specifications from memory or doesn't know much about trains, its appeal remains.

"They're huge, they're complicated and they move," Neil said. 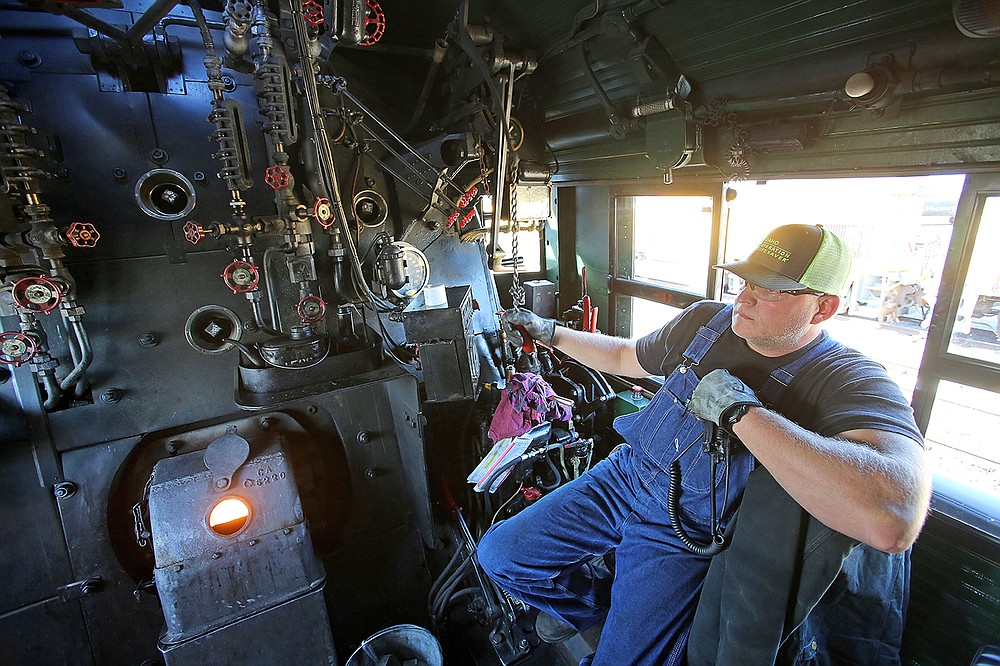 Curt Clark of Cheyenne, Wyo., blows Big Boy No. 4014’s whistle during its Nov. 14, 2019, stop in North Little Rock. When the historic Union Pacific locomotive returns to North Little Rock on Thursday, the steam engine will be paying homage to a city built by railroads. (Arkansas Democrat-Gazette/Thomas Metthe)