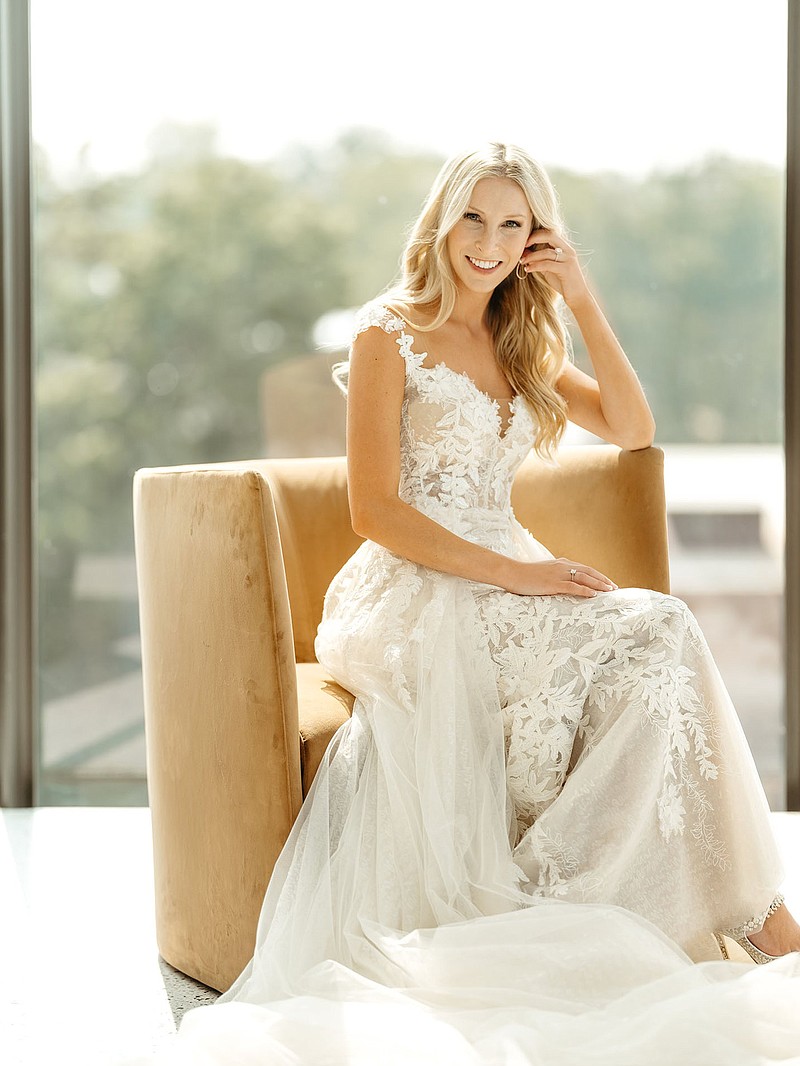 Crystal Bridges Museum of American Art in Bentonville was the setting for the 5:30 p.m. Saturday, Aug. 14, marriage of Hannah Claire Banwarth and Richard Lawson Vassar. The officiant was Kent Webb, uncle of the bride.

Parents of the groom are Terri and Rick Vassar of Little Rock. He is the grandson of Becki and Larry Vassar of Sherwood, the late Linda Caldwell Lain of Little Rock and the late Wayne Welch of Lonoke.

A tunnel of fresh silver berry, hydrangeas and Candlelight garden roses decorated the aisle entrance, and groupings of white delphinium and roses lined the remainder of the aisle. An altar was framed with large white arrangements in cast iron urns. Music was by the Matt Smith Trio. Guests were greeted by Katherine Hinson of Washington and Hayley Kate Webb of Searcy.

Escorted by her father, the bride wore an off the shoulder A-line gown of lace and tulle embellished with floral appliques. The backless bodice had a sweetheart neckline and the skirt extended to a cathedral-length train. She carried a white bouquet of garden roses, lisianthus, peonies and tulips.

Amanda Isabell of Bentonville served as her sister's matron of honor. Bailey Younger of Dallas was maid of honor.

Bridesmaids were Celina Banwarth, Hannah Bigger and Haley Roberts, all of Fayetteville; Briana Barganier of Denver; Jordan Gore of St. Louis; Emi McGhee of Nashville, Tenn.; Lauren Peterson, Jessica Sonnentag and Lauren Vassar, sister of the groom, all of Dallas; Mandy Stefanic of Bentonville; and Cassandra Trexler of Tontitown.

A reception at the museum was held after the ceremony. Guests' tables held white cherry blossom trees and arrangements of garden flowers. A bar tent was decorated with garden greenery and centered with a large arrangement of white wedding flowers. Cocktail hour music was by Smoothman Jazz Ensemble followed by music from The 12 South Band of Nashville.

The bride is a graduate of the University of Arkansas with a bachelor's degree in apparel merchandising and product development. She is employed by Sam's Club as a merchant in children's and team apparel.

The groom has bachelor's and master's degrees in accounting from the university and is an associate merchant with Walmart in outdoor lighting.

After a wedding trip to Maui, Hawaii, the couple will live in Fayetteville.