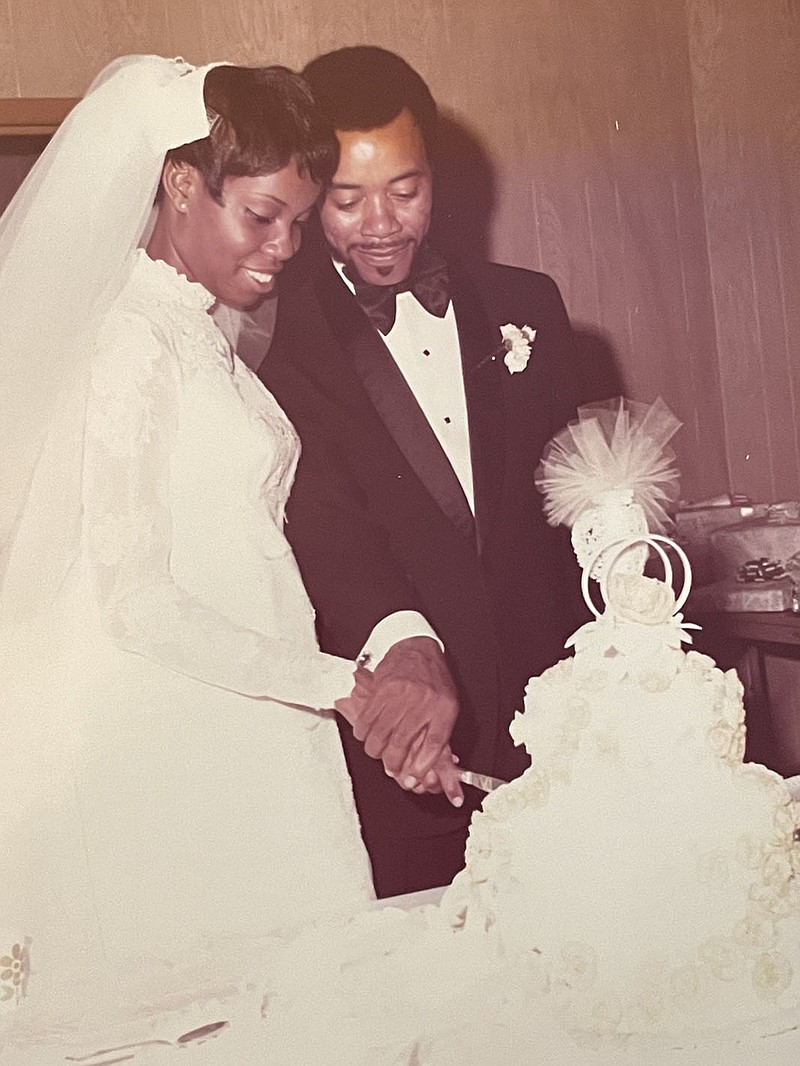 Billy Booth fancied himself an entertainer when he was out with his friends. Teresa Hune wasn't a fan of his group's act but found his solo one charming.

Teresa, a student at Philander Smith College, met him when she went with a friend to a party at someone's apartment in 1969.

"They were too much into themselves and I was not interested," she says of Billy and his friends. "They were talking. They were flirting with everybody."

Billy and his friends had a sizeable audience that night; Teresa remembers there being about eight women for every two men at that party. She and Billy had a brief conversation before she found an excuse to leave.

"I remember telling her that I was going to marry her," Billy says. "That was the first time I saw her."

Later, though, she went out with her friend again. While they were out, she spotted Billy sitting alone at a bar.

"I went over and reminded him that I had met him before and all that and that's when we exchanged numbers," she says.

Without his friends around, Billy's demeanor was completely different, according to Teresa.

"They all had nice cars and they dressed nicely and they were just all showing out when they all were together," she says. "He told me he was going to come visit me, and I thought he was just joking."

Teresa's aunt was going to spend a week in Chicago shortly after that and Teresa went with her.

"When I got back, my mom said, 'Who is this Billy boy who's been calling you? You should have told him you were going out of town,'" Teresa says.

She returned his calls, and he promptly asked her for a date. They went to a drive-in movie to see "Pufnstuf."

"How can you forget that?" says Billy in response to Teresa's claim that she doesn't remember what they saw that night.

That was just the beginning of the fun for them.

"We went out to eat a lot and he went shopping with me," Teresa says. "We went to see Michael Jackson perform in Memphis and we went to football games, things like that. He likes sports so we did a lot of sports things."

Teresa had a job as a ward secretary at Baptist Medical Center while she was going to college, and Billy surprised her at work one day with lunch.

"I had never ordered a pizza before," he says. "I was carrying the pizza sideways under my arm like you would carry a book."

He didn't realize when he left it with Teresa that all the toppings had slid from the top and piled together inside the box. Teresa and her friends poked fun at him about his pizza problem, but they let him know they were grateful for the pie anyway.

"The girls on the floor and I did enjoy it," she says.

About a year after their first date, Billy asked Teresa to go to the jewelry store and pick out a ring.

"I knew we were going to be together forever, even back then," he says. "There wasn't any doubt."

A friend helped Teresa choose a ring she liked and she asked the jeweler to hold it. Billy didn't tell her when he went in to buy it.

"The next thing I knew he brought it over. We were just sitting on the couch talking and he gave me the ring," she says.

Teresa was the only girl in her family.

"I have four brothers," she says. "My mother said she had been waiting all of her life for this moment. She did all the planning for the wedding. Basically all I had to do was show up."

They were married on Aug. 29, 1971, at Mount Olive Missionary Baptist Church in North Little Rock.

Billy and Teresa live in Little Rock. They have three daughters -- Phylinthia Givens and Telesa Hadley, both of Sherwood, and Billynda McAdoo of Atlanta. They also have four grandchildren.

They were planning to take a trip to celebrate their 50th anniversary, but health issues combined with hospital crowding related to the covid-19 pandemic have led them to choose staying closer to home.

"I'm not sure what we'll do but maybe we'll travel somewhere later," she says.

After all these years, Teresa still finds Billy to be entertaining on his own. They find ample opportunities to laugh together.

"He's very entertaining," she says. "We do laugh together a lot."

He says: “I would say it was exciting.”

She says: “Open communication and trust.”

He says: “Always discuss the issues.”