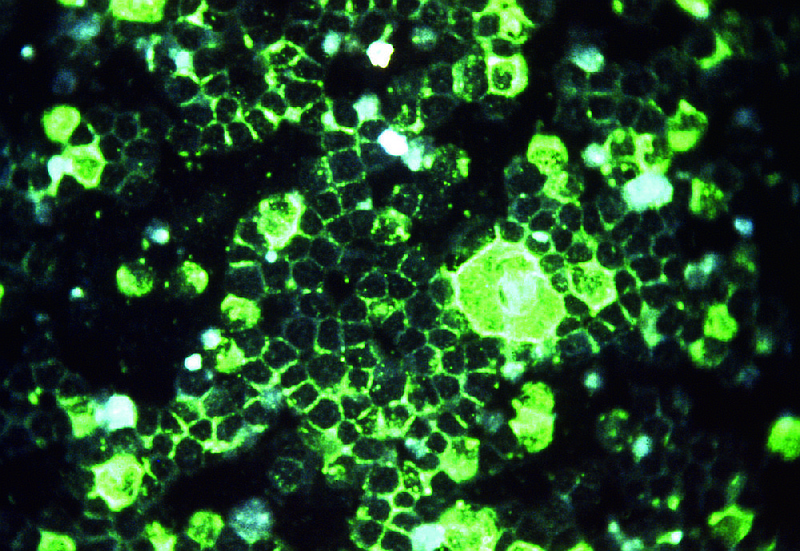 Antibodies to respiratory syncytial virus glow green under ultraviolet light in this photo taken through a microscope using indirect immunofluorescence. RSV is the most common cause of bronchiolitis and pneumonia among children under 1 year of age.

The 36-year-old suffers from asthma, which puts her at a higher risk for being hospitalized from a virus, according to the U.S. Centers for Disease Control and Prevention. So on Aug. 11 she went to the University of Arkansas for Medical Sciences Northwest for monoclonal antibody treatment.

Riklon noticed a difference within 36 hours, including a reduction in her fever and chills, she said.

Her husband, Frailian Riklon, experienced an even more dramatic effect from the treatment, she said.

Riklon, who was vaccinated in January, still has a lingering cough, but feels the treatment made a difference.

Monoclonal antibody treatment helps minimize symptoms and helps keep people who are at high risk for a severe case of covid-19 out of the hospital, according to the university.

"The drug is not a cure but is designed to lessen the viral load and severity of illness," said Dr. Sheena CarlLee, a UAMS internal medicine physician who is helping lead the Northwest Arkansas antibody treatment clinic. "The therapy has proven to help reduce the need for hospitalization for high-risk covid-positive patients by nearly 70%."

Washington Regional Medical Center; Mercy hospitals in Rogers, Fort Smith and Berryville; Northwest Health System; Baptist Health in Fort Smith; and Ozark Community Hospital in Gravette also provide the treatment, along with an infusion therapy center and pharmacy in Washington County, according to the Arkansas Department of Health.

The antibodies are available to qualifying people with mild to moderate covid-19 symptoms, but treatment must start within 10 days after symptoms begin, according to UAMS. People over the age of 65, as well as those 12 through 64 who are at high risk, may be eligible.

However, the treatment isn't approved for patients who are already hospitalized with covid-19 or who require oxygen therapy because it is associated with worse outcomes, according to the Arkansas Department of Health.

What are monoclonal antibodies?

The laboratory-made proteins work by binding and starting to neutralize the virus, which keeps it from attaching to and entering human cells, according to Dr. Sonal Bhakta, chief medical officer at Mercy Hospital in Rogers.

Not only does the treatment keep patients out of the hospital, it also helps them feel so much better that within 24 to 48 hours, they often call and thank their health care providers, she said.

Several high-profile people have made headlines after being treated with monoclonal antibodies, including former President Donald Trump and Texas Gov. Greg Abbott.

The U.S. Food and Drug Administration issued an emergency use authorization in November, allowing monoclonal antibodies to be used to treat mild to moderate symptoms of covid-19 in people 12 and older, according to the Arkansas Department of Health.

Initially, the antibodies bamlanivimab and etesevimab were approved for use, but in June, the FDA announced the CDC found the drugs to be less effective treating the newer variants circulating in the United States. The FDA therefore paused use of the two drugs and recommended Regen-Cov and sotrovimab be used instead, according to the U.S. Department of Health and Human Services.

In July, the FDA issued another emergency use authorization to use the antibodies as way to prevent people from getting sick after exposure, the Health Department website states.

For Kathryn Parker, 36, of Fayetteville, monoclonal antibody treatment was easy and painless.

Parker, who was vaccinated, came down with covid-19 symptoms Aug. 8. She had a high fever and chills, worse than any flu she had ever experienced, and was especially worried because she was about 10 weeks pregnant, she said.

Her father, a physician, suggested she go to the Washington Regional Medical Center emergency room for a covid test and to get antibody treatment, she said.

While some treatments are issued through infusion, Parker said she received four tiny shots in her stomach with very small needles. They weren't at all like the larger jabs that come with a covid-19 or flu shot, she said.

Within a day and a half, the treatment relieved Parker's most severe symptoms, she said. Her husband, Trent Parker, 36, who caught the virus from her also benefited from the treatment, she said.

"It cut everything real quick," she said.

Thursday marked the 12th day since Parker had tested positive, and although she still felt fatigued and had a small cough, her symptoms were minor, she said.

UAMS and Mercy also offer the injectable form of treatment. The entire process, including paperwork and a one-hour observation period after the injection, takes about three hours, Bhakta said.

Parker said she didn't feel any side effects from the treatment. Mercy in Rogers has not seen any side effects among patients either, but there is a potential for an allergic reaction, with symptoms such as hives or wheezing, just like any other medication, Bhakta said.

The Arkansas Department of Health doesn't track how many people have received monoclonal antibodies, according to Danyelle McNeill, public information officer. However, the department's website does keep a list of facilities that offer the treatment. Treatment is available at no cost to patients, but health care facilities may charge for administering it, the website states.

Washington Regional has provided treatment to more than 1,400 people since it began offering antibodies in December, according to spokeswoman Natalie Hardin. Most insurance covers treatment, but some self-funded plans have not waived covid-related deductibles, she said.

Northwest Health has provided treatment to 150 people since November at its hospitals in Bentonville, Springdale and Siloam Springs, said spokeswoman Christina Bull.

Most people should contact their primary care physician to find out if they qualify for treatment and to get help locating an infusion site, Bhakta said. Since the treatments can only be administered inside a 10-day window, it's important for patients to have a sense of urgency once they develop symptoms and test positive for the virus, she said.

Because treatments are available only to people who aren't already hospitalized, injections are offered only on an outpatient basis. UAMS set up a special monoclonal antibody clinic space so covid-positive patients are kept separate from other clinic patients, CarlLee said. The clinic has the capacity to treat about eight patients a day in Northwest Arkansas, she said.

Both UAMS and non-UAMS providers can screen and order treatment for their patients, she said. Individuals can also email the clinic at healthnow@uams.edu with their name, date of birth and phone number. Staff will call to provide screening and order treatment if appropriate.

Covid-positive Marshallese residents who need to be screened can call UAMS at (479) 332-0222 to speak to a Marshallese community health worker in their native language.

For more information and a list of providers in the state, visit healthy.arkansas.gov .

Those who qualify for monoclonal antibody treatment include non-hospitalized patients with mild to moderate symptoms, with less than 10 days since symptom onset and high-risk factors such as:

• Obesity, with a body mass index more than 25

• Neurodevelopmental disorders such as cerebral palsy

• Having a medical-related technological dependence such as a tracheostomy or gastrostomy, or use positive pressure ventilation not related to covid-19