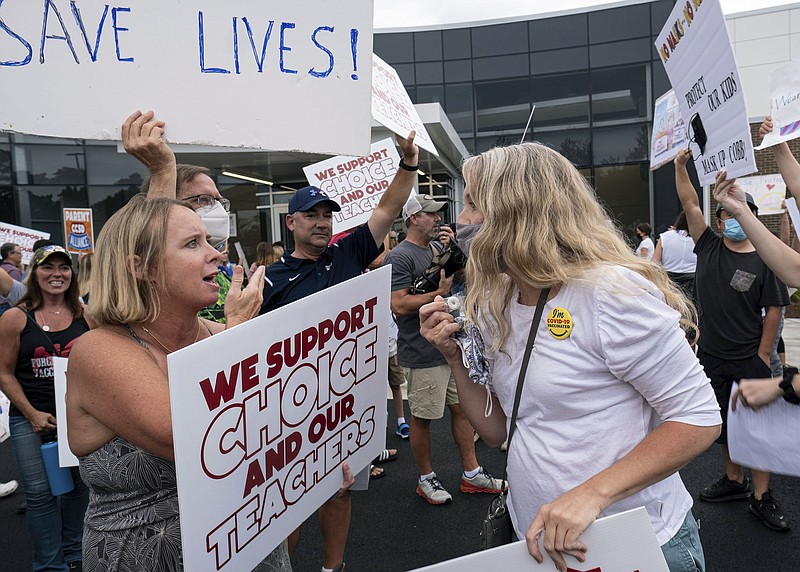 People on both sides of the mask mandate in schools issue in Cobb County, Ga., face off Thursday ahead of a school board meeting in Marietta, Ga. Similar confrontations are happening across the country over masks and vaccines. “The heat definitely got turned up this week,” said Shannon Portillo, a county commissioner in Kansas who was berated Wednesday at a meeting on masks. “It got much more hostile than anything I had seen.” (AP/Atlanta Journal-Constitution/Ben Gray)

PHOENIX -- Across the country, anti-vaccine and anti-mask demonstrations are taking scary and violent turns. People have been stabbed, punched or harassed at their homes for being in favor of vaccine and mask mandates. Often the assailants are parents.

Educators, medical professionals and public figures have been stunned at the level at which they have been vilified for even stating their opinions. And they have been terrified over how far protesters will go in confronting leaders outside their homes and in their workplaces.

"The heat definitely got turned up this week," said Shannon Portillo, a county commissioner in Kansas who was berated at a meeting Wednesday in which the board mandated masks indoors for unvaccinated children. "It got much more hostile than anything I had seen."

The pandemic rage has coincided with a surge in covid-19 cases and hospitalizations, a growing movement to require vaccines and a new round of mask requirements, most notably in schools where exhausted families had hoped the worst days of the virus were over. Now, the country is averaging nearly 1,000 coronavirus deaths a day.

Anger from parents over masks has been simmering in rural Amador County in Northern California, and it reached a peak earlier this month when for the first time a teacher was attacked. A father became irate when he saw his daughter leave school wearing a mask while teachers in a lounge were unmasked. Vaccinated staff members are allowed to take off their masks if students aren't present, said Torie Gibson, Amador County Unified School District superintendent. The father was told this and left, but returned later to speak with the principal.

[Video not showing up above? Click here to watch » arkansasonline.com/822miller/]

A concerned male teacher went to the principal's office. An argument ensued and the father struck the teacher.

"The teacher had some lacerations and bruising on his face and a knot on the back of his head," Gibson said.

He was treated at a hospital and returned to work the next day. Still, the incident has shaken teachers and the community.

"The teachers have definitely been on edge. They are fearful because the last thing they want is to have an issue with a parent," Gibson said. "They definitely looked over their shoulder for quite a few days, but I think things are now a little bit more calm."

Meanwhile, the father is prohibited from entering the school and could face prosecution.

Since Hawaii announced a mandate earlier this month that state and county workers would have to show proof of vaccination or face weekly tests, 50 to 100 unmasked vaccination opponents have gathered almost nightly outside the downtown Honolulu condominium building where Lt. Gov. Josh Green lives with his wife and two children, ages 14 and 10.

Some yell into bullhorns and shine strobe lights into apartment units, Green said.

Flyers with his photo and the words "Jew" and "fraud" have been plastered around the neighborhood. Green, who is Jewish, has been tearing them down and turning them over to the state attorney general's office.

[Video not showing up above? Click here to watch » arkansasonline.com/822labrawl/]

He understands the right to protest, he said, but not why demonstrators subject bystanders to such rage.

Ironically, Green wasn't home during a recent intense weekend of protests. He was on the Big Island working at his other job as an emergency room doctor, treating mostly covid-19 patients during a record surge in hospitalizations in the state.

"I will personally be taking care of these individuals in the hospital as their doctor when they get sick from refusing to wear masks and refusing to be vaccinated," he said.

The parent's attack on the teacher in Northern California was among several recent such incidents. At a school in Texas, a parent ripped a mask off a teacher's face during a "Meet the Teacher" event.

A Missouri hospital leader was approached in a parking garage last week by a man from Alabama who handed him papers accusing him of "crimes against humanity."

School board members, county commissioners, doctors and leaders are regularly confronted at meetings and in public with angry taunts that compare them to the Taliban, Nazis, Marxists and the organizers of Japanese internment camps.

[Video not showing up above? Click here to watch » arkansasonline.com/822sdcboard/]

In the Kansas incident, commissioners in Douglas County in the Lawrence area were confronted with an angry, mostly unmasked crowd Wednesday before they mandated that children 2 to 12 years wear masks indoors in public places. During four hours of public comment, opponents invoked the Holocaust, the Taliban and Japanese internment camps.

As the granddaughter of a Holocaust survivor, Portillo, one of the commissioners, was outraged at the comparisons.

"It is really insulting to families all over who lost loved ones in genocides," she said.

Researchers, professors and political experts have varying opinions about how and why discourse seems to keep plunging to new lows over the pandemic, but many agree that social media is a big factor.

Barbara Rosenwein, professor emerita at Loyola University Chicago and author of "Anger: The Conflicted History of an Emotion," said social media can make minority views look more like the majority. On the many social media platforms, people validate each other's anger as being from a just and righteous place, she said.

"Over time, the possibility of feeling righteous anger has become democratized. Everybody feels almost obligated to feel it," Rosenwein said. "That locks you into a position that will allow for no compromise, which is terrible for our country."

That anger also makes it seem OK to buck authority such as teachers and government at a time of heightened culture wars on topics like education. Getting punished or even arrested might feel like "a badge of courage," she said.

"I don't think these people are running into old-age homes and telling granny she better not get vaccinated," Rosenwein said. "I think they're telling the schoolteachers because teachers represent an elite that's teaching their kids."

Rosenwein said there's no grand, one-size-fits-all solution to talking to a friend or family member who may be taking an anti-mask and anti-vaccine stance to extreme levels.

"You have to start where they are ... 'Let's hear your reasons and try to go from there,'" Rosenwein said.

Across the U.S., religious figures, doctors, public officials and other community leaders are trying to help people circumvent covid-19 precautions.

While proponents of these workarounds say they are looking out for children's health and parents' rights, others say such stratagies are dishonest and irresponsible and could undermine efforts to beat back the highly contagious delta variant.

Mask and vaccination requirements vary from state to state but often allow exemptions for certain medical conditions or religious or philosophical objections.

In Oregon, Superintendent Marc Thielman of the rural Alsea School District told parents they can sidestep the governor's school mask requirement by applying for an accommodation for their children under federal disabilities law.

Thielman said he hit upon the idea after the governor's mandate generated "huge, huge push-back" from parents.

In a letter to educators last week, Democratic Gov. Kate Brown said she was shocked that Thielman was undermining her policies by "instructing students to lie" about having a disability.

Brown has mandated masks in schools and vaccinations for all school staff members as a surge in infections is clobbering Oregon. The state has broken its record for covid-19 hospitalizations day after day, and cases among children have increased dramatically.

Thielman, who is planning to run for governor next year, when Brown can't seek reelection because of term limits, said he is not anti-mask but is sensitive to parents' concerns that face coverings can cause anxiety and headaches in children.

In some cases, he said, he believes those problems justify an exemption under Section 504 of the Rehabilitation Act of 1973 because they interfere with learning.

But Laurie VanderPloeg, an associate executive director at the Council for Exceptional Children, an advocacy group, cautioned that under the federal law, children would not be allowed to go maskless simply because they asked.

Under the law, she said, school districts would have to go through a formal process to establish whether a child does, in fact, have a particular mental or physical disability, such as a respiratory condition, that would warrant an exception to the mask rule.

Oregon resident Jenny Jonak, who has an 11-year-old daughter with autism and health problems that make her more susceptible to covid-19, said wearing masks is a "very small inconvenience" to protect vulnerable students.

"If a child really has a genuine reason, if there's some sort of breathing or respiratory problem, then that should be respected," she said. "But if not, then I don't know what we're teaching our children if we're teaching them basically that something as simple as wearing a mask is something that they should bend the rules for."

Louisiana Attorney General Jeff Landry, a Republican who regularly spars with Democratic Gov. John Bel Edwards, posted sample letters that would allow parents to seek a philosophical or religious exemption from Edwards' mask rule at schools -- or from a vaccination requirement, if one is enacted.

The letters have been disseminated by GOP lawmakers and thousands of others.

"Louisiana is not governed by a dictatorship. The question is: 'who gets to determine the healthcare choices for you and your child?' In a free society, the answer is the citizen -- not the state," Landry wrote on Facebook.

Edwards accused the attorney general of creating confusion and defended his policy on face coverings.

"By adopting these measures -- and ignoring those that are unwilling to acknowledge the current crisis -- we can keep our kids in school this year and keep them safe," the governor said.

In California, the state medical board is investigating a doctor who critics say is handing out dozens of one-sentence mask exemptions for children in an attempt to evade the statewide school mask requirement.

Dr. Michael Huang, who has a practice in the Sacramento suburb of Roseville, declined to answer questions from The Associated Press but told other news outlets that he examines each child and issues exemptions appropriately. The California Medical Association issued a statement condemning "rogue physicians" selling "bogus" exemptions.

In a neighboring suburb, pastor Greg Fairrington of Rocklin's Destiny Christian Church has issued at least 3,000 religious exemptions to people with objections to vaccination, which is becoming mandatory in an increasing number of places in California.

He said in a statement that his church has received thousands of calls from doctors, nurses, teachers and first responders terrified of losing their jobs because they don't want to get vaccinated. His office declined to provide the exemption letter.

"We are not anti-vaccine," he said. "At the same time, we believe in the freedom of conscience and freedom of religion. The vaccine poses a morally compromising situation for many people of faith."

Health experts such as Dr. Peter Chin-Hong, an infectious-disease specialist at the University of California, San Francisco, warned that such strategies will sow confusion about masks and vaccinations. 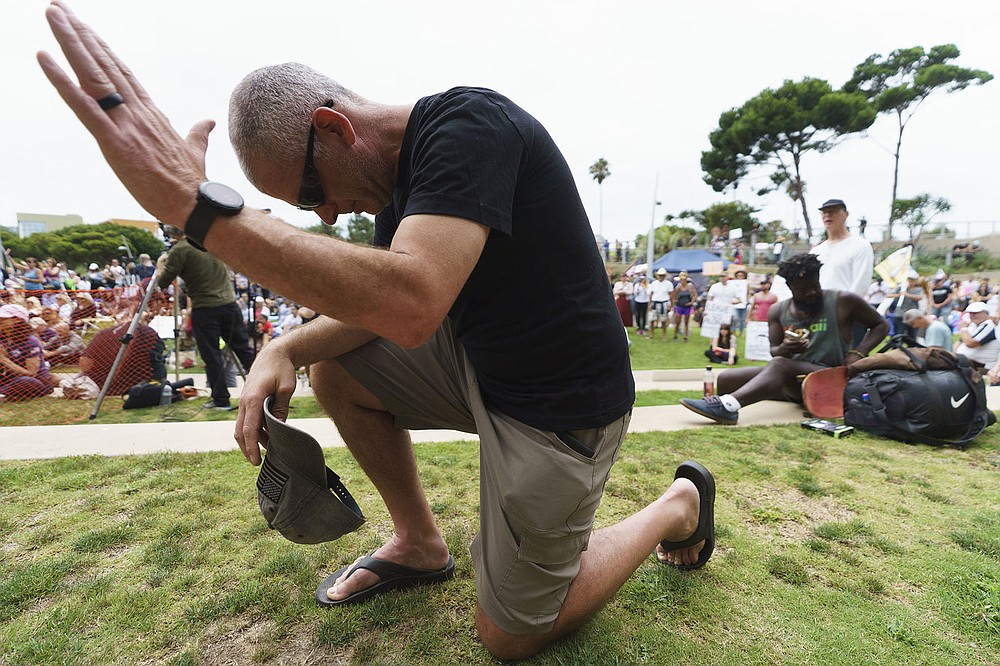