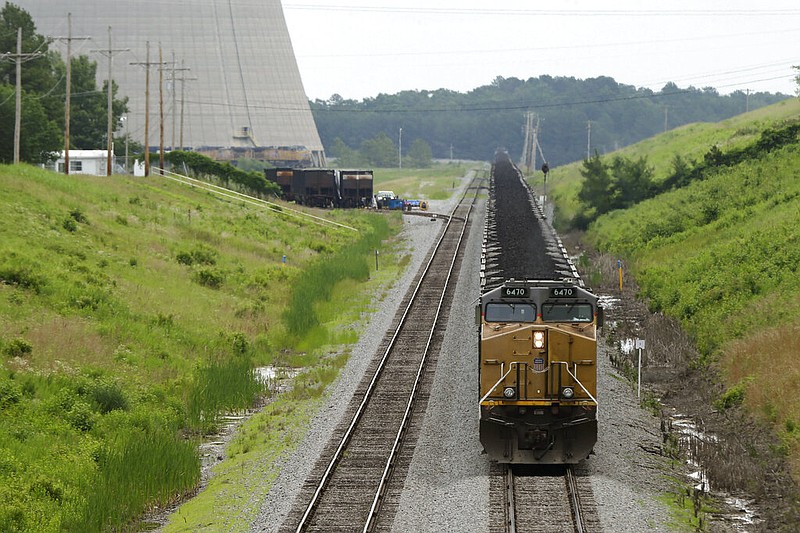 A locomotive pulling coal cars is stopped near the White Bluff power plant near Redfield in this June 2, 2014, file photo. (AP/Danny Johnston)

Arkansas has not exceeded federal limits for common air pollutants that can harm health or the environment in recent years, according to the latest state report, but environmental advocates say there's still room for improvement.

The "2020 State of the Air" report from the Arkansas Energy and Environment's Office of Air Quality assessed the concentrations of ground-level ozone and other pollutants regulated by the National Ambient Air Quality Standards program.

The report, which can be found at www.adeq.state.ar.us/air/state-of-air, states that Arkansas is well below the federal limits when it comes to most the pollutants monitored, with ozone levels close to the limit but still below it.

Air pollutants such as ozone and particulate matter increase the amount and seriousness of lung and heart disease and other health problems, according to the United States Environmental Protection Agency. Vulnerable populations -- children, pregnant women, older adults, and individuals with pre-existing heart and lung disease -- are especially susceptible.

Clean air is not only important for Arkansans' health, but benefits two of the state's largest economic sectors -- agriculture and tourism -- making the state an even more attractive place to live, said Becky Keogh, secretary of the Arkansas Department of Energy and Environment and director of the Division of Environmental Quality.

"Arkansas is blessed with extremely high quality air. We are one of the handful of states that meet air quality health-based standards that are set nationally," Keogh said. "The takeaway really for this year is we continue to see improvement in air quality in spite of the fact that we've always been on that upper echelon of states."

Since 2010, the state has seen a 20% reduction in ozone across the state, she said. However, levels have not changed much in recent years, according to the report.

"The state of our air in 2020 is substantially similar to the state of our air in 2016, which is concerning because ozone and particulate matter pollution levels in the most populated parts of the state are near levels that are unsafe for humans to breathe," said Glen Hooks, chapter director of the Arkansas Sierra Club. "We were making decent progress before 2016 and I hope we can continue that trend moving forward."

Overall, the state stays at what is considered background levels of ozone, with little risk of exceeding federal standards, Keogh said, and maintains good air quality the vast majority of the year.

"One exception to that is in Crittenden County, as we get closer to Memphis [Metropolitan Statistical Area]. There we have such a population density with Tennessee, Mississippi and Arkansas that we know those numbers creep up a little more and get closer to the standard."

Crittenden County, located in east central Arkansas, remains the highest county in terms of ozone levels. Pulaski County and Washington County, which both saw a slight increase, are about tied for second-highest levels.

The division puts out air quality numbers to the public every day. In 2020, the Little Rock‒North Little Rock‒Conway Metropolitan Statistical Area saw 143 days within the Air Quality Index's green or "Good" category, nine days in the yellow or "Moderate" category, and one day in the orange or "Unhealthy for Sensitive Groups" category. Similarly, the Fayetteville-Springdale- Rogers Metropolitan Statistical Area experienced 150 days in green, three days in the yellow, and no days in the orange, according to the report.

Keogh said that while industry certainly plays a part, the air quality and higher ozone in Crittenden is driven largely by the population density and high levels of transportation in the area.

Over 60% of the emissions causing ozone in Arkansas are really not in control of the state, she said.

Memphis Metropolitan Statistical Area is an example, and highlights the value of interstate efforts for air quality improvement.

Another example would be the smoke coming from fires in the western part of the country and Canada this month, though Keogh said this happens on an infrequent basis.

New technology is one of the biggest factors helping to reduce emissions, Keogh said, in terms of cleaner transportation, industry and permitting programs.

"Arkansans can feel assured that OAQ inspectors remained vigilant and responsive to the needs of the public in FFY 2020," said Office of Air Quality Associate Director Will Montgomery. "Permit engineers continued to issue timely and technically sound permits. This included quick action to ensure that facilities that pivoted to the production of hand sanitizer were able to do so rapidly."

SAFER and Clean Fuels are funded using Volkswagen Settlement dollars. GoRED! is funded under the Diesel Emission Reduction Act using a combination of dollars from the EPA, the Volkswagen settlement, and permit fees.

The Volkswagen settlements resolve allegations that the automaker violated the Clean Air Act by the sale of approximately 590,000 model year 2009 to 2016 diesel motor vehicles equipped with "defeat devices" in the form of computer software designed to cheat on federal emissions tests.

SAFER was a one-time funding opportunity for state agency fleets to reduce emissions. GoRED! provides funding for projects that reduce diesel emissions and has helped to replace 17 school buses, according to the report. The Clean Fuels Program provides funding assistance for projects that repower or replace diesel medium-duty trucks, heavy-duty trucks, and buses with new alternative-fueled vehicles.

The anticipated emission reduction based on the 2020 awards for these three programs is 1,033.29 tons, according to the "2020 State of the Air" report. This is the equivalent of taking 255 typical passenger vehicles off the road, based on Environmental Protection Agency numbers.

In addition to these three programs, the office launched two electric vehicle infrastructure funding assistance programs this year with more than $2 million from the Volkswagen settlement fund.

"Our state is deploying hundreds of electric vehicle charging stations funded by the Volkswagen settlement, with many more on the way if the infrastructure package is signed into law," Hooks said.

Entergy will soon be closing Arkansas's two largest and dirtiest coal plants. Under a settlement agreement approved in March, the utility company must stop all coal combustion at the White Bluff Power Plant in Redfield by the end of 2028 and at Independence Power Plant by the end of 2030 as well as all operations of units at Lake Catherine by the end 2027.

This will improve air quality for Arkansas and neighboring states, Hooks said, but the state is still home to "five dirty coal-burning power plants, which--along with cars and trucks--are giant contributors to our unhealthy pollution levels."

Hooks said what will really move the needle for clean air is if the utility companies retire their remaining coal and gas plants and invest heavily in renewable energy, battery storage, and energy efficiency.

"Moving away from dirty fossil fuels would create jobs and provide pollution-free energy, while saving money and improving reliability during extreme weather events," he said.