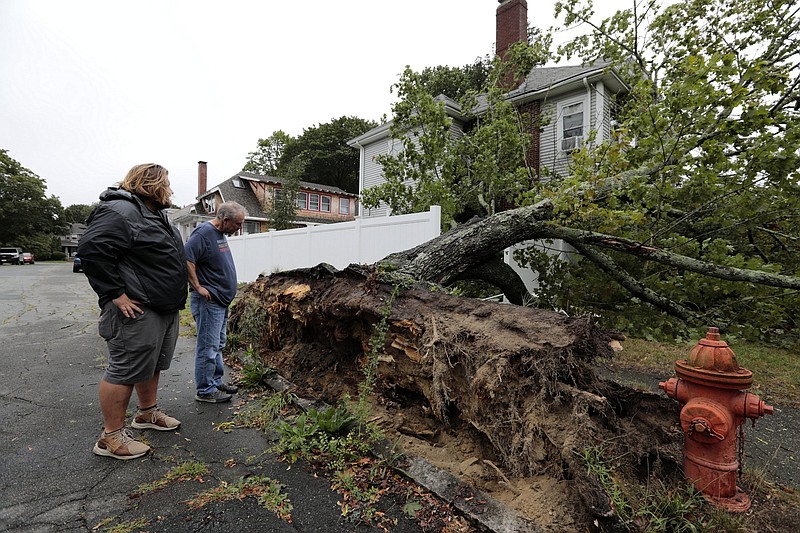 Nicholas LeBlanc and his father Drew LeBlanc look at the tree that fell onto the home they live in on Maple Street in New Bedford, Mass. while they were having breakfast on Sunday, Aug. 22, 2021. (Peter Pereira/The Standard-Times via AP)

WESTERLY, R.I. -- Tropical Storm Henri socked the Northeast with heavy wind and rain as it made landfall Sunday on the coast of Rhode Island, knocking out power to more than 100,000 homes and causing deluges that closed bridges, swamped roads and left many people stranded in their vehicles.

The storm was downgraded from a hurricane before reaching New England, leaving many to breathe a sigh of relief in a region that has not taken a direct hit from a hurricane in decades. There were few early reports of major damage due to wind or surf.

But the storm's heavy, sustained rains raised concerns about flooding from the storm that threatened to stall over the region before pivoting to the East and moving out to the Atlantic Ocean tonight. Some of the highest rain totals were expected inland.

[Video not showing up above? Click here to watch » arkansasonline.com/823nestorm/]

Several major bridges in Rhode Island, which stitch together much of the state, were briefly shuttered Sunday, and some coastal roads were nearly impassable.

Westerly resident Collette Chisholm, a 20-year resident, said the waves were much higher than normal, but said she wasn't concerned about her home suffering extensive damage.

"I love storms," she said. "I think they're exciting, as long as no one gets hurt."

In Newport, Paul and Cherie Saunders were riding out the storm in a home that her family has owned since the late 1950s. Their basement flooded with 5 feet of water during Superstorm Sandy nine years ago.

"This house has been through so many hurricanes, and so many things have happened," said Cherie Saunders, 68. "We're just going to wait and see what happens."

Rhode Island has been hit by hurricanes and tropical storms periodically -- including Superstorm Sandy in 2012, Irene in 2011 and Hurricane Bob in 1991. The city of Providence sustained so much flooding damage from a hurricane in 1938 and Hurricane Carol in 1954 that it built a hurricane barrier in the 1960s to protect its downtown from a storm surge coming up Narragansett Bay. That barrier -- and newer gates built nearby -- were closed Sunday.

[Video not showing up above? Click here to watch » arkansasonline.com/823govs2/]

Some communities in central New Jersey were inundated with as much as 8 inches of rain by midday Sunday. In Jamesburg, television video footage showed flooded downtown streets and cars almost completely submerged.

In a region where the ground in many areas is saturated from recent rains, the forecast had some fearing the worst effects of the rainfall were still to come.

Marshall Shepherd, director of the atmospheric sciences program at the University of Georgia and former president of the American Meteorological Society, said Henri was reminiscent in some ways of Hurricane Harvey, a slow-moving storm that decimated the Houston area in 2017, exacerbated when bands of rain set up east of the city, a phenomenon meteorologists call "training."

"You're seeing a little bit of that training in the New Jersey/New York area, even as the storm itself is a little to the east and the northeast," Shepherd said. "To the west side of the storm, you have a banding feature that has literally been stationary -- sitting there and dumping rain. That will be a significant hazard for the New York and New Jersey area."

Some in New England cautioned against complacency, warning that Henri -- if it does stall and dump multiple inches of rainfall -- had the potential to inflict damage similar to Tropical Storm Irene in August 2011.

After Irene roared up the coast, many in the Northeast were relieved when the New York City area largely was spared. But then the storm settled over the Green Mountains, and Irene became the biggest natural disaster to hit Vermont since a 1927 flood. Parts of the state got 11 inches of rain in just 24 hours. Irene killed six in Vermont, left thousands homeless, and damaged or destroyed more than 200 bridges and 500 miles of highway.

"I remember Irene and media outlets outside Vermont brushing it aside as if no big deal while it hit Vermont," Robert Welch, a podcaster, tweeted Sunday. "I'll relax when I see it at sea on radar."

President Joe Biden declared disasters in much of the region, opening the purse strings for federal recovery aid. 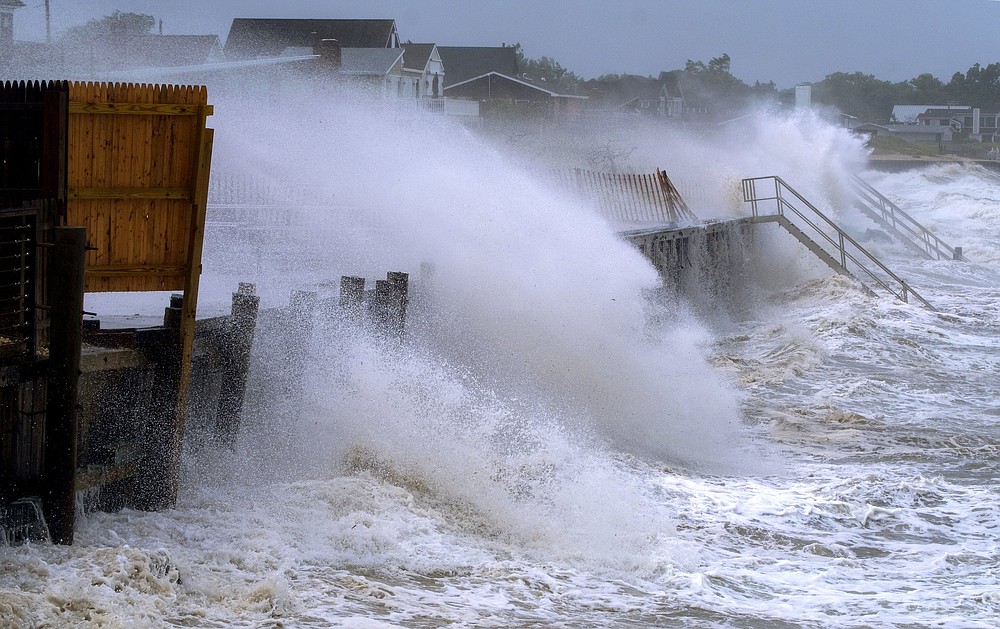