OPINION | GAME ON: Shape your heroes to meet the changing challenges of 'Wildermyth' 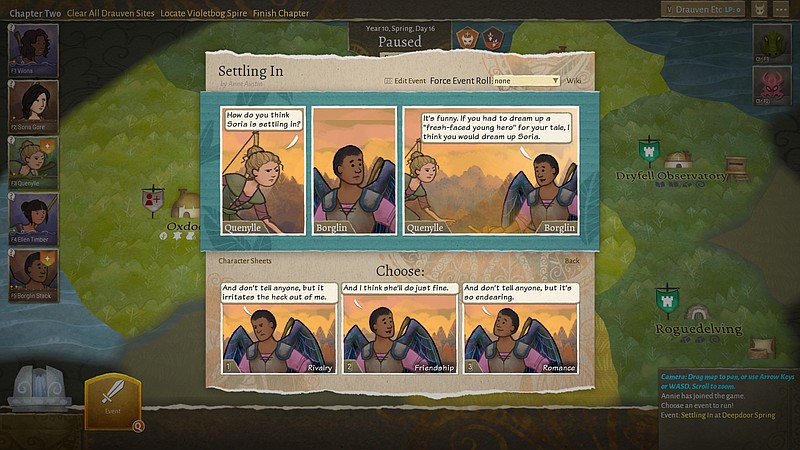 Wonderfully complex but simple to grasp, "Wildermyth" is a true gem in the indie role-playing-game world.

It's a heavily randomized adventure that is also bursting at the seams with personality, clever writing and meaningful relationships.

"Wildermyth" is a procedurally generated party-based fantasy epic with combat similar to that of the "X-COM" series. It's also a story-driven exploration of the life of adventurers, starting from their pitchfork-wielding days as farmers and following them until the moment they become legends — or fall along the way.

The game's design is ambitious and innovative, taking the best of various genres and crafting something truly unique. In the papercraft world (think "Paper Mario") of the Yondering Lands, three villagers set out to stop a world-ending calamity. The characteristics of the three-person party, composed of a warrior, mystic and hunter, can be randomly generated or chosen for synergy.

Stories are told through a series of comic-book style vignettes and cut-scenes.

Each hero comes with personality attributes that determine his or her outlook in the world, from leadership and greed to liking poetry, along with several character hooks, such as being lucky, weird or filled with wanderlust. This is similar to how one might create a character for a Dungeons & Dragons campaign, creating a background for a dungeon master to integrate into the game.

Some events only trigger if characters with certain traits or hooks are in a party, and the strength of personality traits can determine the odds of success or failure.

That's essentially a long way to say that there's a lot of behind-the-scenes number-crunching to create a fleshed-out, affecting story of heroes crafting a larger-than-life legacy in a way that makes every play-through a novel experience.

But just as important are the players' decisions. With every level promotion, heroes choose one of three new abilities, or they upgrade an existing ability. Some abilities are specific to a class, and some are general abilities available to any hero.

Abilities also can be gained through events or by completing Opportunities based on quest hooks set with character creation. Those can include gaining a pet that boosts combat abilities or undergoing a transformation, such as growing wings or slowly turning into a wolf or a skeleton.

Campaigns are lengthy in the Yonderlands, most being five-act affairs. The heroes start as fresh-faced peasants in their teens or early 20s, and they age as the game progresses. Each successfully completed act grants a number of years of peace, and you'll find your heroes fairly quickly approach retirement, set at a base of 45 years.

Each act lets you recruit another hero to the party, and certain classes, events and traits can extend the time a hero can be an active adventurer. Mystics, for example, get a 20-year boost, and completing your character's Opportunity adds a decade.

The legacy point system is where "Wildermyth" shines. Retirement and even death are not the end. Add heroes to your "legacy pool," and they may be encountered again as younger versions of themselves. Legacy heroes can be recruited in subsequent games instead of new random farmers by paying extra legacy points. The higher the legacy tier, the more abilities they retain from their earlier adventure.

This lets players essentially mold a particular hero over time. For example, Ben the Warrior might gain the ability to hit multiple enemies with a single attack, and every time he's recruited in future play-throughs, he'll have that ability. Upgrade him to the next legacy tier, and he will come back with two earlier abilities of your choice.

Reused heroes also come back with the body transformations, pets and equipment they had before. And if Ben the Warrior fell in love, you could select his partner as his soul mate — he'll only love that one character, even in subsequent campaigns.

Relationships aren't just for show, either. Characters can be friends, rivals or lovers, with the depth of their relationship adding combat advantages.

You might be lulled into thinking that "Wildermyth" is a game where the fresh-faced storytelling trumps combat depth, but nothing could be further from the truth.

Each campaign starts with a "deck" of monsters available to encounter. While characters get stronger after every battle, so do the enemies, with a number of "calamity" cards being drawn that make the enemy more dangerous. Calamity effects include increasing a monster's health, armor, damage or attack range; replacing monsters with more powerful variants; adding new types of monsters to battle; and introducing new monster abilities, such as stuns and poison attacks.

Calamity cards are drawn after every battle — win or lose — and at timed intervals as the campaign progresses, with the frequency and number determined by starting difficulty level. In addition to the four difficulty levels (storyteller, adventurer, tragic hero and walking lunch), up to 100 calamity cards can be added at the start of the game, adding an immense level of randomized difficulty.

Calamities after battles can be avoided by spending legacy points to cancel them. This is useful if you see a particularly troublesome enemy getting a boost to its damage-doing ability or its armor.

Despite "Wildermyth" being a campaign where heroes face catastrophe and can die, it's filled with themes of friendship, love and courage. There's no blood or gore, inappropriate language or overt sexuality, although characters do fall in love, get married and have children (who will also join your adventuring party!).

And in the spirit of friendship, there's even a cooperative multiplayer mode, where you and a pal can each control a group of heroes at the same time.