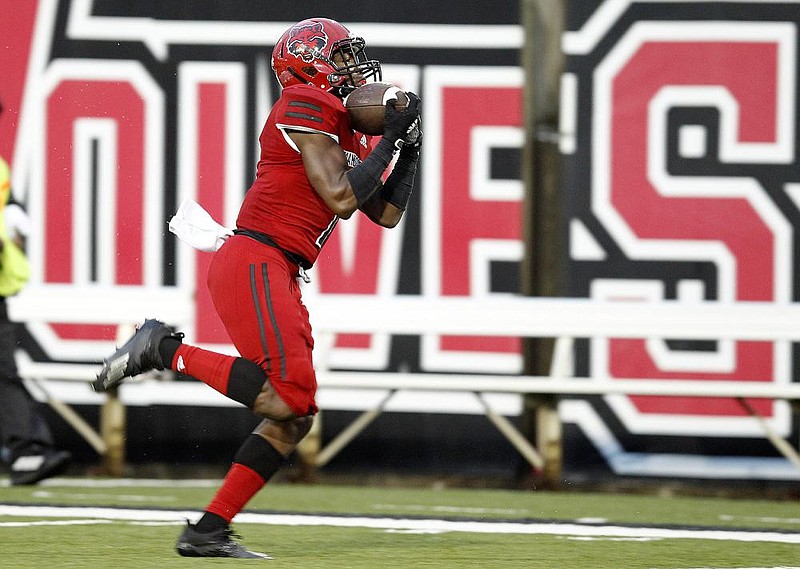 JONESBORO -- The routine a year ago was familiar.

There isn't a single option among this group of Red Wolves who can step in for the standout Adams, who caught 40 more passes, 5 more touchdowns and piled up nearly 600 yards more than his next closest teammate.

But a year after leading the Sun Belt Conference in yards per game, ASU's offense has the potential to be even more dangerous with both depth and experience at all three skill positions.

"A lot of people knew us for passing last year," wide receiver Corey Rucker said during last week's media day. "This year, we now run the ball really well ... [and] there's going to be situations where receivers all across the board are making plays, even guys coming off the bench."

It was hard not to walk away from the Red Wolves' 2020 season finale feeling good about Rucker. The Bentonia, Miss., native broke the FBS record for most yards in a single game by a freshman, totaling 310 yards on 9 catches with 4 scores.

At 6-0 and 190 pounds, Rucker has the speed and catch radius to be a threat in multiple areas of the field.

Along with Rucker, juniors Jeff Foreman and Te'Vailance Hunt -- a TCU transfer originally from Texarkana, Texas -- have comprised the first-team receiving unit in practice for almost all of fall camp. It's a group that will give either Layne Hatcher or James Blackman plenty of targets in a Butch Jones offense that expects to attack down the field often.

"It takes the pressure off me as a quarterback to not have to throw a perfect ball all the time," Hatcher said. "If we've got guys in a one-on-one situation, it's usually to our advantage."

Senior Dahu Green also will be an option on the outside, with the combination of Boise State transfer Khyheem Waleed and true freshman Reagan Ealy likely handling the bulk of the load as slot options in four- or five-receiver sets.

They'll be joined over the middle of the field by tight end Reed Tyler, who started all 11 games at the spot a year ago. Tyler enters his senior season as the clear No. 1 option, but Jones has indicated that 6-3 freshman Emmanual Stevenson likely will serve in the understudy role.

Freshman Seydou Traore, who has played only one season of football after growing up as a soccer goalie across the pond in London, could also work his way into snaps. He's recovering from a knee injury and has been wearing a bulky brace throughout camp.

"We're [trying to] widen that horizon at the tight end position," Tyler said Monday. "When you think about the receiving game, you think about running a route, catching the ball, scoring touchdowns. ... But Coach [Jones] has really been harping on serving a greater purpose as a tight end."

If there's one spot on the ASU offense that's set in stone, it's Marcel Murray's role. The senior tailback was the 2018 Sun Belt freshman of the year, yet injuries limited him to five games last fall. Murray's only touchdown came in a late November matchup against Texas State.

He won't have to do it alone. Iowa State transfer Johnnie Lang Jr. gives Jones and offensive coordinator Keith Heckendorf a change-of-pace back, and sophomore Lincoln Pare is a weapon in the passing game after catching 12 balls last fall.

Plus, former first-team All-Ivy League honoree Alan Lamar will have his chances after joining the Red Wolves after three seasons at Yale.

A healthy Murray, however, should be a tone-setter for an ASU offense that has much to live up to.

"[The last two years] taught me to value every snap," said Murray, who told reporters earlier this camp he hasn't felt this good physically since middle school. "The running back is a special part of our offense."

Running backs at a glance

Pass catchers at a glance

Analysis: In a down year for Arkansas State, the offense was a consistent bright spot. No team in the Sun Belt came within 30 passing yards per game of the Red Wolves — mostly thanks to the efforts of Jonathan Adams. He’s now gone, but the returning tandem of Rucker and Foreman will give ASU speed to fill Adams’ void. Tyler returns along with Green, making for the possibility of several familiar targets if Layne Hatcher winds up seizing the quarterback job.

Murray will all but certainly be the workhorse running back, but after dealing with a nagging ankle injury the past two seasons, expect to see a mix of backs sharing time. Lang seems to be in the driver’s seat for the No. 2 spot, with Pare not far behind him.