Jefferson moves up: New quarterback is taking command of huddle 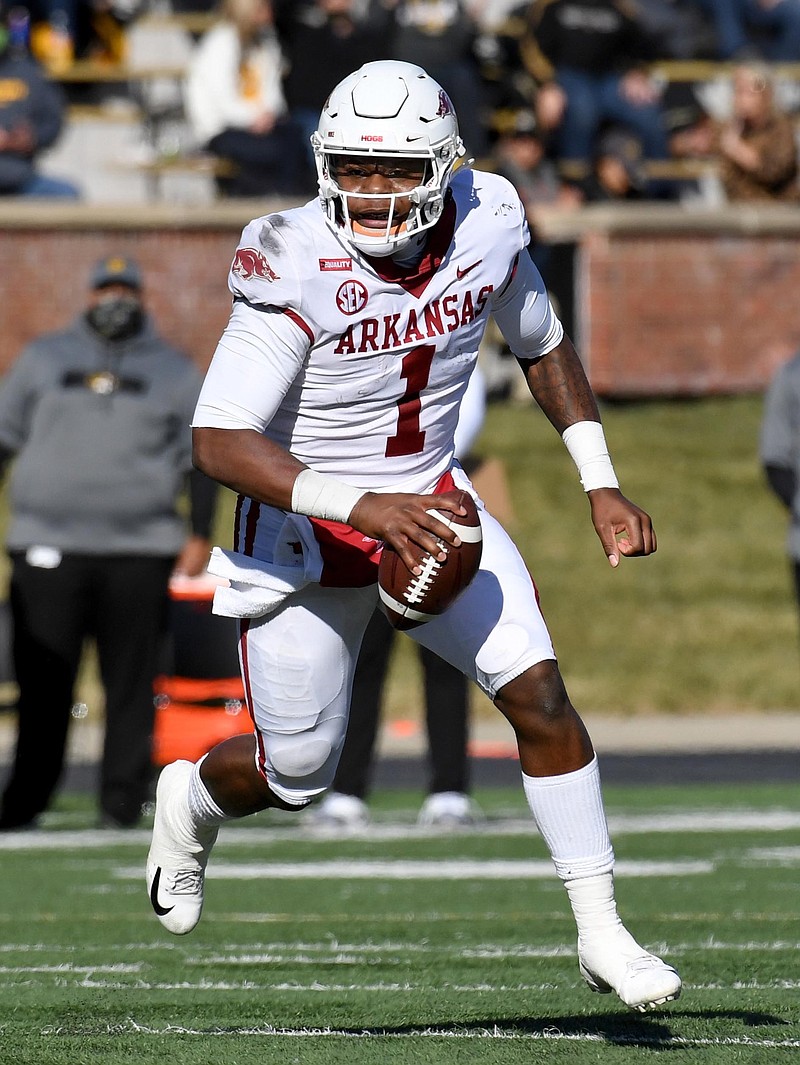 FAYETTEVILLE -- For the second year in a row, the Arkansas Razorbacks will enter the season with a clear-cut starting quarterback.

Contrast that to the two seasons prior to Coach Sam Pittman's arrival. A chaotic quarterback carousel with eight different starters in 24 games was part of the lost seasons of 2018 and 2019.

Jefferson is a career 47.2% passer in two starts and parts of eight games. Despite the number of games, the sample size of Jefferson's snaps is actually small, and context is important in evaluating what he has done and what he can do.

The 6-3, 240-pounder's first start was at No. 1 LSU late in the 2019 season, and it was cut short by a shoulder injury. Jefferson seemed on track for a solid amount of reps in last year's season finale against No. 1 Alabama, but that appearance was shortened by a minor knee injury.

The best evaluation of Jefferson in a full-game setting comes down to one performance. In the Razorbacks' 50-48 last-second loss at Missouri last year, Jefferson accounted for four touchdowns and 306 yards.

He engineered a last-minute touchdown drive and two-point conversion to give the Razorbacks the lead with 43 seconds remaining. That's two feathers in his cap for prospering in a spot start after sitting for several weeks and for rallying the offense for what could have been a game-winning score.

Jefferson has not been on fire during the Razorbacks' two camp scrimmages, playing by his own estimation "average" in the first, then working limited snaps in the second.

"I feel like my camp is going good," Jefferson said late last week in his third media appearance of camp. "I've been improving in some areas that I've really been working on and trying to improve my game."

Areas of improvement include passing accuracy and making the best decision in the RPO in the fastest time possible.

Briles thought Jefferson had a solid spring, but he harped on the sophomore about improving mobility and accuracy through the summer and into camp.

"Whenever KJ had some opportunities to play and then when we had scrimmages in the spring, he was very accurate," Briles said. "When we were in practices, he wasn't as accurate."

"I really like where he's at from a practice standpoint with his accuracy," Briles said. "With our offense and what we do, I'd like for him to be over 65%. If we're doing that, we're hitting pretty good."

Jefferson thinks the 65% rate is doable.

"I feel like that's a great number I can accomplish this year, just taking what the defense gives me," he said. "Not being too greedy. Not trying to be overly aggressive. Just taking easy completions. Moving the ball down the field and getting a great amount of yards, it shouldn't be an attack that I can't handle."

Pittman urged Jefferson and all the quarterbacks to speed up their read and react times between scrimmages one and two.

"I do feel like, without looking at the tape, that KJ did a nice job of distributing the ball, staying away from sacks," Pittman said. "His reads ... I felt like another thing we needed to improve on was our quarterback reads.

"I asked KB [Briles] and them, they tally every day a percentile of reads. To me, it's not like you're reading a dictionary, you're reading a 260-pound guy over there. To me, if he's up the field I hand the ball off, and if he's not, I run it or throw it. I didn't think our reads were up to what our standard is, and I think we did a lot better job of that today and KJ is included in that."

Pittman had a solid endorsement of Jefferson's showing in the final major scrimmage, which included his 1-yard touchdown run in limited duty.

"I felt like he was accurate today," Pittman said. "I think he's starting to feel like he's the man back there, and our team is rallying around him. I thought he had a good day throwing and running the offense."

Senior tackle Myron Cunningham is one of many Razorbacks who has seen Jefferson's leadership skills come to the forefront since the winter.

"KJ has come a long way since last year," Cunningham said. "He's grown into his leadership role that we need for him to be this season, and I think he's made great strides."

Said senior guard Ty Clary, "I think seeing Feleipe for a year helped. Now that he's the guy, I think he enjoys being the guy, he wants to be the guy and he's going to be the guy."

Jefferson said he's comfortable being the "face of the program."

"My teammates have instilled a lot of confidence in me," he said. "I feel the confidence will take you a long way and help you overcome adversity as well.

"I feel like my teammates have just pushed me with, 'I know KJ, you can do this. We need you in certain situations. Be big here. We need you to be a big-time quarterback.' "

Jefferson said he weighed about 247 pounds early in camp and intends to drop to around 235. Briles prefers him at that weight for agility and escapability reasons, but added he didn't care if he's 285 "as long as he's dropping dimes on people and getting away from pressure."

Redshirt freshman Malik Hornsby is holding down the second-team job by a solid margin over the trio of junior John Stephen Jones, transfer freshman Kade Renfro and true freshman Lucas Coley. The 6-2, 195-pound speedster shined in the Hogs' second scrimmage with touchdown runs of 80 and 8 yards, and scoring passes covering 45 and 15 yards to John David White and Kendall Catalon, respectively.

"Malik is a fast little bugger," defensive end Zach Williams said Saturday. "I mean, you have to be outside of him. Like if you're not he's just gonna outrun you and put you in a blender."

Hornsby's passing accuracy and decision-making have been up and down in training camp, but his speed and skill set open up possibilities.

"There's not anybody, in my opinion, right now that's that close to him as a 2 quarterback," Pittman said Saturday. "I think whenever we get into live games and he's able to use his feet and somebody's not tagging him and the play's down, I think he'll be a really good quarterback for us. I don't know that we'll run the same exact offense with him in the game because we want to use his attributes."

The extra dimensions to the Kendal Briles offense brought about by the running skills of Jefferson and Hornsby will be offset somewhat by an expected drop in completion percentage. That can be made up if the quarterbacks execute on third downs better than the Razorbacks did in 2020. The quarterbacks must anticipate defensive movement, be quick with their reads and sharp with their execution to make the offense flow. Accuracy, which has been an issue for both top quarterbacks in the past, needs to push well past the 50% range. Briles’ hopes for 65% would be gravy.