Search on for Tennessee flood victims 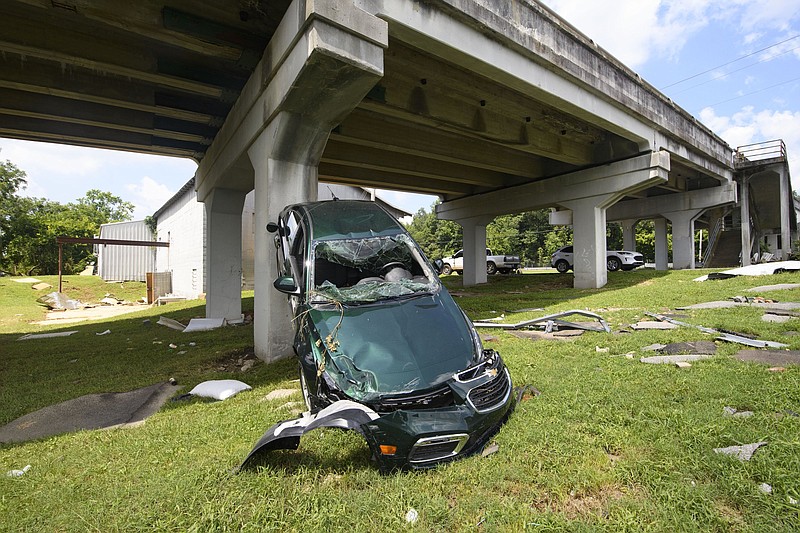 A car rests against a bridge support after being swept up in a recent flash flood, shown Monday, Aug. 23, 2021, in Waverly, Tenn. Heavy rains caused flooding in Middle Tennessee days ago and have resulted in multiple deaths, and missing people as homes and rural roads were also washed away. (AP Photo/John Amis)

[Video not showing up above? Click here to watch » https://www.youtube.com/watch?v=-T60vDgnpfg]

Saturday's flooding took out roads, cellphone towers and telephone lines, leaving people uncertain about whether family and friends survived the unprecedented deluge, with rainfall that was more than triple the forecast amount and shattered the state record for one-day rainfall. Emergency workers were searching door to door, said Kristi Brown, health and safety supervisor with the Humphreys County schools.

Many of the missing live in the neighborhoods where the water rose the quickest, said Humphreys County Sheriff Chris Davis, who confirmed the 22 fatalities in his county and said 12 to 15 people remain missing. Their names were on a board in the county's emergency center and listed on a Waverly city Facebook page, which is being updated as people call in and report themselves safe.

"I would expect, given the number of fatalities, that we're going to see mostly recovery efforts at this point rather than rescue efforts," Tennessee Emergency Management Director Patrick Sheehan said.

The sheriff's office Facebook page filled with people looking for missing friends and family. GoFundMe pages asked for help for funeral expenses for the victims, including 7-month-old twins swept from their father's arms as he tried to escape.

The death of the twins was confirmed by family members. A foreman at country music star Loretta Lynn's ranch also died. The sheriff of the county of about 18,000 people some 60 miles west of Nashville said he lost one of his best friends.

Up to 17 inches of rain fell in Humphreys County in less than 24 hours Saturday, shattering the Tennessee record for one-day rainfall by more than 3 inches, the National Weather Service said.

School was canceled for the week, according to the sheriff's office. Waverly Elementary and Waverly Junior High suffered extensive damage, said Brown, the schools health and safety supervisor.

Tennessee Gov. Bill Lee toured the area, calling it a "devastating picture of loss and heartache." President Joe Biden offered condolences to the people of Tennessee and directed federal disaster officials to talk with the governor and offer assistance.

Just to the east of Waverly, the town of McEwen was pummeled with 17.02 inches of rain, smashing the state's 24-hour record of 13.6 inches from 1982, according to the National Weather Service in Nashville, though the numbers have to be confirmed.

A flash flood watch was issued for the area before the rain started, with forecasters saying 4 to 6 inches was possible. Before Saturday's deluge, the worst storm recorded in this area of central Tennessee had been 9 inches of rain, said Krissy Hurley, a weather service meteorologist in Nashville.

"Forecasting almost a record is something we don't do very often," Hurley said. "Double the amount we've ever seen was almost unfathomable."