TELEVISION: There's no such thing as a 'Nicole Kidman' role 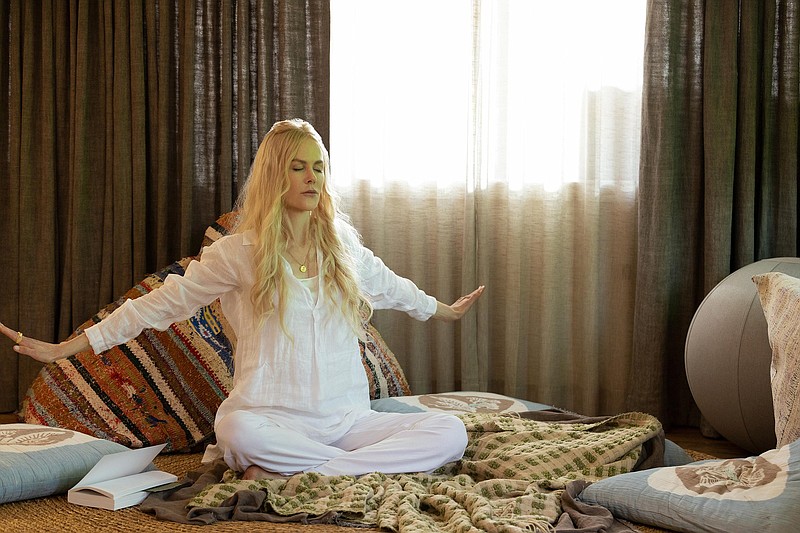 Nicole Kidman performs in a scene from “Nine Perfect Strangers,” which premiered Aug. 18 on Hulu. Kidman’s filmography is all over the place, frustrating efforts to pinpoint a “Kidman” role. (Vince Valitutti/Hulu)

If you want an overview of the past three decades at the movies — especially of prestige pictures and art-house cinema — you could do a lot worse than the filmography of Nicole Kidman.

Within the Australian native and 2003 Oscar-winner's projects are glimpses of the trends that have shaped Hollywood's past quarter-century: the big-budget takeover by superhero flicks ("Batman Forever" and "Aquaman"); the stop-and-start resurrection of the studio musical ("Moulin Rouge!"); the rise of "elevated horror" ("The Others"); the haphazard rebooting of any and all intellectual property ("Bewitched" and "The Stepford Wives"); the overwhelming whiteness of female-led features ("The Hours" and "The Beguiled"); even the demoralizing unstoppability of Adam Sandler ("Just Go With It").

As The Washington Post's chief film critic Ann Hornaday noted, Kidman has enjoyed "one of the most fascinating careers in a business notorious for pigeonholing its starlets early."

It was probably because of her alertness to industry currents, salient among them the ongoing migration of substantive female roles for women older than 35 from the movies to television, that brought her to HBO's "Big Little Lies" (for which she won a best actress Emmy) and "The Undoing," and now Hulu's "Nine Perfect Strangers," in which she plays an enigmatic wellness guru. But it's increasingly hard not to notice the disjunct between the productive openness that drives Kidman the film actor and the cautious awards-baiting (and diminishing returns) that define Kidman the TV star.

After the early 2000s peaks of "Moulin Rouge!" and "The Hours," in which she incarnated, respectively, a tubercular showgirl and Virginia Woolf, the actor spent the next decade-and-a-half proving there was no such thing as a Nicole Kidman role.

Yes, she seems to have a soft spot for embodying real-life personages, no matter how little the resemblance. In addition to Woolf, Kidman has played Grace Kelly, Diane Arbus and Gretchen Carlson and will soon appear on-screen as Lucille Ball. But a scan of her filmography reveals the "actorly submission" to auteurs that Hornaday cites. Her directors are, in fact, a "who's who" of boldface-named filmmakers.

It's tempting, then, to attribute the stultifying homogeneity of Kidman's more recent TV roles to her sudden timidity regarding her collaborators. Creator David E. Kelley's "Big Little Lies" marked a turning point in Kidman's trajectory. As Celeste, the patrician wife of a charming but violent husband (played by Alexander Skarsgard) and mother to two small boys, Kidman revealed layer after layer of fragility, terror and repression, as her character came to terms with the physical abuse she'd tried for years to excuse and the grim possibility of her sons learning to normalize their father's roughness with their mother. It was a showstopping performance, especially in Kidman's therapy scenes with Robin Weigert.

Disappointingly, Kidman followed up with another Kelley series, "The Undoing," in which she hardly stretched as the patrician wife of a charming but violent husband (this time played by Hugh Grant) and mother to a young son. Though "The Undoing" was a ratings hit for HBO, its creative failures are reflected in the lack of Emmy nominations for Kidman and the miniseries itself.

While the true nature of Kidman's spiritual teacher, Masha, on Kelley and John Henry Butterworth's "Nine Perfect Strangers" is initially withheld, the more details we learn about her, the less she appears the exotic rare bird that's initially suggested and more the familiar blend of affluence, violence, self-suppression and threatened motherhood.

Kidman may well love collaborating with Kelley, and these recurring themes and milieus just might be the ones that speak most to her. But her current doldrums do feel like a waste of her talents, as well as of her star power to get approved under-the-radar projects that don't already have a TV legend's name attached. And if she regrets the decline in reputation that her all-over-the-place approach got her, the prudence doesn't seem to be doing her any favors, either.

But it also feels uncharitable to solely blame Kidman and Kelley when misfires like "The Undoing" and "Nine Perfect Strangers" reflect not just individual artists' choices, but the calcifying tropes of "prestige TV." Given the hundreds of scripted series that are made every year, there should be room for more dramas about complicated marriages and the epidemic of violence against women. Until then, you can see Kidman in "Nine Perfect Strangers," which seems destined to become best-known not for its lead performances, but for its resemblance — and inferiority — to "The White Lotus."